Beef Stew with Red Wine in the Instant Pot 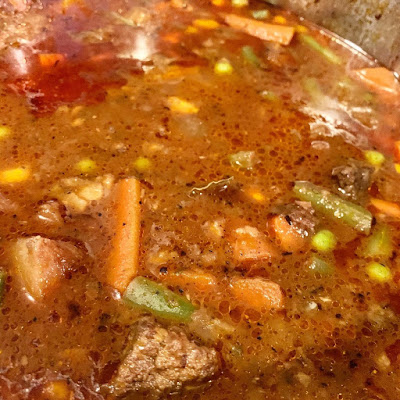 Been doing a lot of comfort food cooking these days.  Partly because of the weather, partly because of my general ennui, and partly because the food just tastes good.  I had a hankering for a good beef stew to be served over boiled potatoes.  I had some at a pub in Philly recently but it was terrible. Gluey gloppy gravy that tasted of stale rosemary and rancid herbs.  Nary a piece of beef to be found in the bowl.  The cook must have used canned boiled potatoes in the stew too because they had an off, almost tin-can like taste.  When you know you can make it better then you need to make it better.

The cut of meat to use for this matters - but it doesn't need to be expensive. A tough cut of meat should break down from cooking under pressure or under a long slow cook in liquid.  I found a nice chuck roast from one of the Farmers' Market vendors, and instead of keeping it whole, I cut it into chunks, trimming away some of the excess fat and the membranes/silver skin.

This recipe calls for lots of root veggies - in abundance in the market right now; carrots, celery, onions, and parsnips.  Savoie Organic Farms had fantastically sweet Lilly German Butter Potatoes last week. I bought a 5 pound bag and boiled up a dozen or so little golden orbs to serve under my stew.  For added vegetables, I tossed in a bag of frozen mixed veg just to amp up the veggie quota.  A little less chopping and a lot more flavor at the end of my cooking time.

This recipe is easy and can be made in the Instant Pot.  I seared the meat in batches; I saute the veggies next and then deglazed the pot with a combination of red wine, Worcestershire sauce and water.  Added everything back to the pot - meat, veggies, seasonings and tomato sauce and let it cook for 50 minutes, and let the pressure come down for 30 minutes more.  The gravy made barely needed to be thickened.

This is a good set it and forget it kind of meal that tastes good when first made and gets better as it sits.  To make this in a slow cooker, saute all the meat and the vegetables first in a large pot (just as the recipe below indicates) then add it all to a slow cooker and set it either on high for 4 hours or low setting for up to 8 hours.  Sauteing the meat and veg helps build up flavor which is what you want from either cooking technique.  Either cooking method will have the same outcome, tender meat and a flavorful gravy.  The benefit of a pressure cooker is that the stew will be done in about 2 hours.