Over three weeks ago, on Saturday, October 8th, the 17th annual Collingswood Farmers' Market Apple Pie Contest was held.  With over 20 entries, closing in on 24 at last count, there was a pie for every possible taste and type.  We had classic pies, mixed fruit pies, cream style pies, crumbles, buckles, crumb-topped and caramel. There were humble pies and decorative pies. There was a pie mask for the Day of the Dead.  We had floral, pumpkin, tree of life, lattice and crumb, stars and stripes all the way to a cylindrical rosette apple pie.  The sampling was exhaustive and waist-expanding.  It took me a full day to recover from all the tasting.  I'd like to say it took me these past three weeks to regain my composure in order to write my recap, but alas, it was my usual preoccupation with our voting and my typical procrastination.  Pity.  This was the pie contest for the ages and it deserves to be scooped up and served to you a la mode...

When you have over 20 pies in the contest (I'm still not sure how many we had - but let's say there were definitely 24), it's hard to make decisions.  There were five us us officially judging - Mr. Schrober from Schober Farms; Eric Robinson from Frugal Resale; Robb Burrough, taster extraordinaire; Alan Fishman (Longtime friend of the Farmers' Market), and moi. We had some assistance from others as well - my son Nate joined me after his soccer practice and couldn't wait to dive into the pies.  Between this contest and the peach contest back in August, Nate has found a love of pie and of being on stage.  I wonder where he gets that from?  So back to eating.  Our first task was to judge the pies on best presentation.  As so many were artistically created, even this category was tricky. 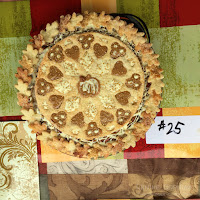 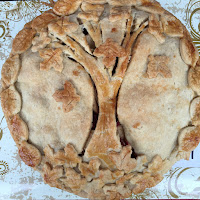 Best Presentation:
1st Place - #21 - the pie with the apple tree, baked by Melanie Whitley
2nd Place - #25 - the pie with a leaf motif crust, hearts, clovers, and a pumpkin, baked by Emily Thompson.  She's a long-time pie contestant and winner! 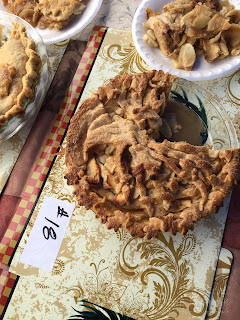 3rd Place - #18 another tree-topped pie, this time as a sort of lattice work tree, baked by June Walker. 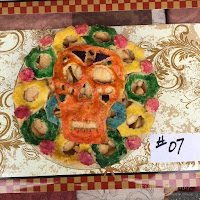 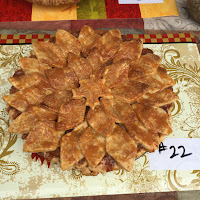 In my notes, I see that I agreed with the votes on pie #18, June Walker's.  I also enjoyed the look of pie #7, just for the shear fun of it.  It was a pie with a Day of the Dead Mask theme - colorful and original. I was a fan of pie #22, a pie with leaves in concentric circles, centered with a maple leaf and burnished with a maple glaze.  Pie #21 also took my fancy.  The skill it took to create the tree and the leaves on the top crust was an impressive amount of work.
Then we cut into the pies and forked in.  It was time for the tasting.  We delved into the classic apple pie category.  About half the entries were considered classic apple pies.  All apples, double crust or crumb topping, or in some cases, both a top crust and a streusel topping.  I wish I had doubled up on my sugar meds! 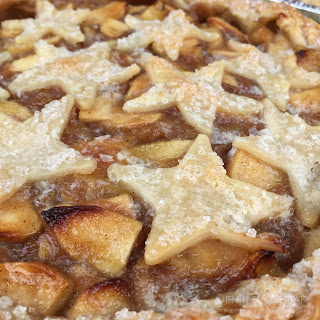 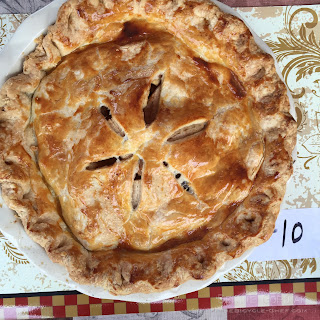 Classic Apple Pie Winners:
1st Place - #19, baked by Charles DiFranco - his pie hit all the right notes, flaky, sweet tender crust.  Good choice of apple - not tart, not mushy.  They held up well.  When the pie was cut, it didn't weep, the pie juices had set.
2nd Place - #3 , baked by Dina DiRenzo - a pie topped with stars for the top crust.  Another well-set pie that utilized good apples and just enough cinnamon to set it apart form its competition.
3rd Place - #10, baked by Connie Felton.  Turns out Connie is a friend of mine, but since I didn't see what pie she baked, it was a very impartial voting.  A true "blind-bake, blind-taste" test for me.  Connie's Classic arrived almost moments before we started judging.  Her rustic deep dish pie with its star shaped slits cut out on the top crust to allowed steam to escape and be an artistic embellishment.

We had a few tie-breakers to make, as we were dead-locked for 2nd place and 3rd place.  After another round of tasting, we had our winners.  The pies I wrote about in my notebook were #19, for its good balance but I would have loved it if it had been warm.  #15 - it was pretty.  #10 (one of our winners!), my notes say "Whoa!"  and again about pie #19 - it was sweet with a hint of cardamon.
Pies with cheese crusts, berries, nuts, caramel, creamcheese, cranberries, or all the above, were in the Anything goes category.  It was getting harder to make choices.  After so many bites, your palate gets weary.  It was time to go back to the basics.  Look, smell, appearance of the filling, the way the apples feel on the fork and then your tongue.  Tasting all the pies truly utilizes all of your senses.

Anything Goes Winners:
1st Place - #20, baked by Linda Sauerwein.  Her lattice and crumb top pie also included caramel. It was, according to Linda, a recipe she found on the King Arthur website.  It had been a blue ribbon winner, and it truly was.  Under Linda's capable hands, she brought to Collingswood a New England-style apple pie special.
2nd Place - #23, baked by Jennifer Jupiter.  We had a 4 way tie for 2nd place between pies 21, 22, 23 and 24.  After a lot of debate, Jennifer's pie, another lattice and crumb topper, was deemed the clear winner.  This was a difficult tie breaker, it took a few tries to get to our clear choice.  Ms. Jupiter's Jumping Jupiter Cosmic Pie was outta of this world!
3rd Place - #21 and 22 - another tie!  These were baked by Melanie Whitney and Chya Stonehill.  Melanie's pie, #21caught my eye and vote several times, as I really enjoyed her handicraft with her leaf motif and the caramelized burnish.  Chya's pie, #22, the other tree topped crust, also made my list of favs.

After all of our indulging, we then decided upon which pie we most wanted to take home.  By this time, I was full and couldn't think about eating another bite.  Our votes were tallied a bit quicker this time.  The grand prize winner turned out to be our Classic Apple Pie winner, Charles DiFranco

Take Me Home Winners:
1st Place - #19, baked by Charles DiFranco.  Our Classic Pie winner.  This was his first year entering, and his homey, warm, sweet pie was just the right fall treat.
2nd Place - #25, baked by Emily Thompson.  Again, another win here, taking home both the anything goes category and the take me home prize.  Her ultimate caramel apple pie, with it's beautiful leaves, cut outs and perfect inside was the pie you just wanted to photograph again and again.  Emily is another long-time contestant, who truly knows her way around the kitchen stove.  She and her mother enter pies each season and take home prizes frequently.  Her pie had notes of caramel and vanilla.  I wrote that "She's just too darn good!"

Now that it's been almost 4 weeks, I can say I'm ready for a piece of apple pie again.  As it is my all-time favorite this was a contest that I enjoyed with all my being.  Congratulations to all the winners and to all of our entrants.  It's a brave thing to do to enter a pie, to put yourself out there and display your handiwork.  It was appreciated and we all enjoyed each and every entry.  Everyone who entered brought something delightful to the contest.  Brava!
Email Post
Labels: apples Collingswood CollingswoodFarmersMarket contests