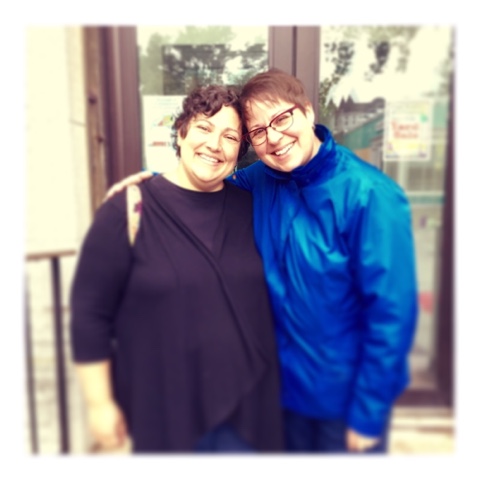 16 years ago on June 2, 1999, I had a first date with my now partner, Liz.  We met or rather, became acquainted with each other in Mid-May 1999, at an event that I catered for the choral group for whom Liz worked.  It was a lavish affair, in the rehearsal hall of The Academy of Music.  My best friend, Rachel, another friend, Martha, and I spent 2 days cooking and preparing food and drinks for 100 people.  Our story of this catering gig is one of those legendary tales of our friendship and relationship, filled with pathos, drama and a lot of laughs.  At the time, it felt more like pathos and chaos. It took a few years for any of us to look back at the insanity that I got us into, catering a gig out of my small apartment kitchen for 100 or more people.

In the craziness of the event, filling up trays, cleaning up drinks and dirty napkins, I spied this dark-eyed quiet beauty.  It was one of those lightening bolt moments of my life where I saw HER and KNEW I HAD TO TALK TO THIS WOMAN.  Liz may or may not have felt the same way about me but she managed to make her way towards me at the end of the night.  We chit-chatted and made small talk.  I tried to play it cool with her in the few spare moments we had to talk.  Whatever I said struck a chord with Liz and she remembered me.  A few days later the mutual acquaintance we had (who hired me to cater the party) told me he knew someone who liked me.  Yeah, just like in high school or junior high, whisper down the lane, "I know someone who likes you..."

It took a few more weeks for Liz and I to actually talk and find out who each of us was.  Mind you, the acquaintance was all set to play match maker, hoping that all of us could go out for drinks together - him, his husband, another friend, Liz and me.  I was sweating it not wanting him to play yenta and my really wanting to know who this mysterious Liz girl was that liked me.  Finally, phone numbers were exchanged and Liz called me.  We talked for a while and made plans to meet on Tuesday night, June 2, 1999, in between her rehearsal and my evening job working a concession stand at a local theater.  After we were both done work, we met up for drinks at a bar called Potcheen.  We shared french fries and beers while sitting at the bar on high stools.  It was a modern day grown-up version of sharing a milkshake at the soda fountain.  A few dates later we realized that the lightening bolt had struck us both.  A month into our dating I told Liz I was awfully fond of her.  Love came slowly and steadily into our lives. 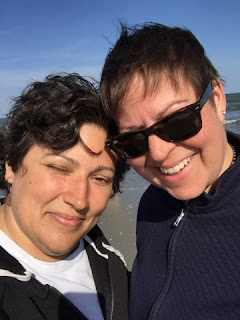 Here we are 16 years later; on our 16th anniversary, we went to Collingswood Borough Hall to apply for a marriage license.  Our wedding date is June 13th.  If you asked me back then if I had ever imagined that I would be married I would have resounding said NO!  Growing up I always knew I was gay, or I knew from age 13 on. My younger years I'm not sure, but definitely from 13 it was known.  I even have journal entries describing my conflicted feelings about my sexuality.  As I grew up, matured, figured things out, the world around me did as well. In the mid-80's when I was hitting my young adult years, being gay was not a socially accepted way of life but it was far easier for me to be gay in 1985-87 than it was for generations before me.  In the 1990's those of us living in big East Coast or West Coast Cities to be closeted didn't feel the need to be closeted.  But getting married? Not possible.  So I grew up, matured, lived and loved all without the thought that I could ever be married.  Until now.