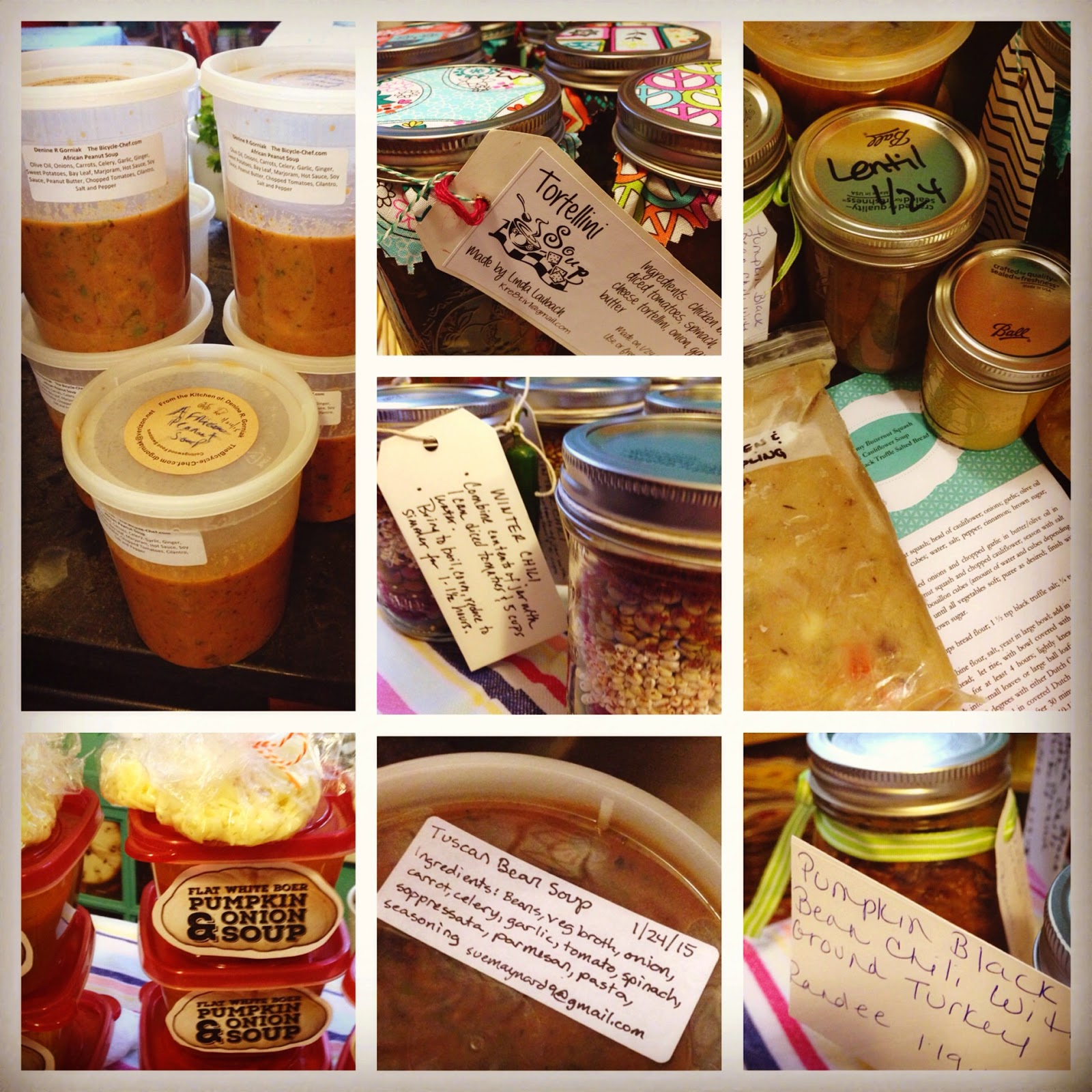 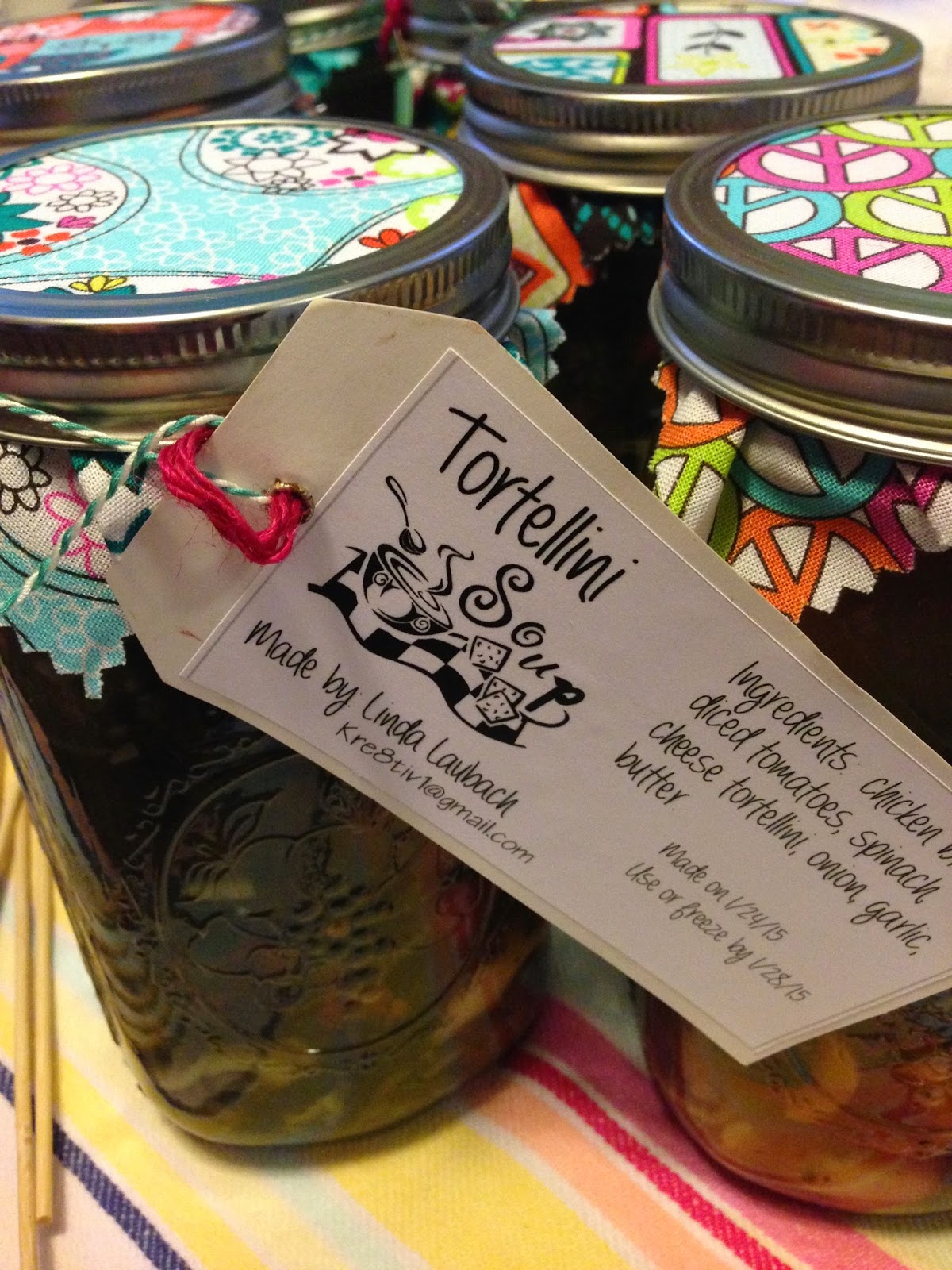 I hosted a Soup Swap at our house this past Saturday.  The idea was floated in one of my Facebook groups and I hopped the idea and made it an event while the interest was high.  We had 11 participants, mostly from the Collingswood area, come over on a slushy/snowy afternoon, all bringing pints and containers of homemade soups.  The swap was a great way to re-introduce food swaps to friends, old and new, and it rejuvenated me with the idea of wanting to organize food swaps again.  The last swap I hosted was in May, at our 1 year anniversary.  While I've attended a number of swaps - the last one being in December, which was a lot of fun and one of the best events I've attended in terms of the people and food stuffs, I just haven't felt like organizing one.  The October event I wanted to run didn't get any interest and mine just waned.  Hosting the soup swap party truly rejuvenated me. 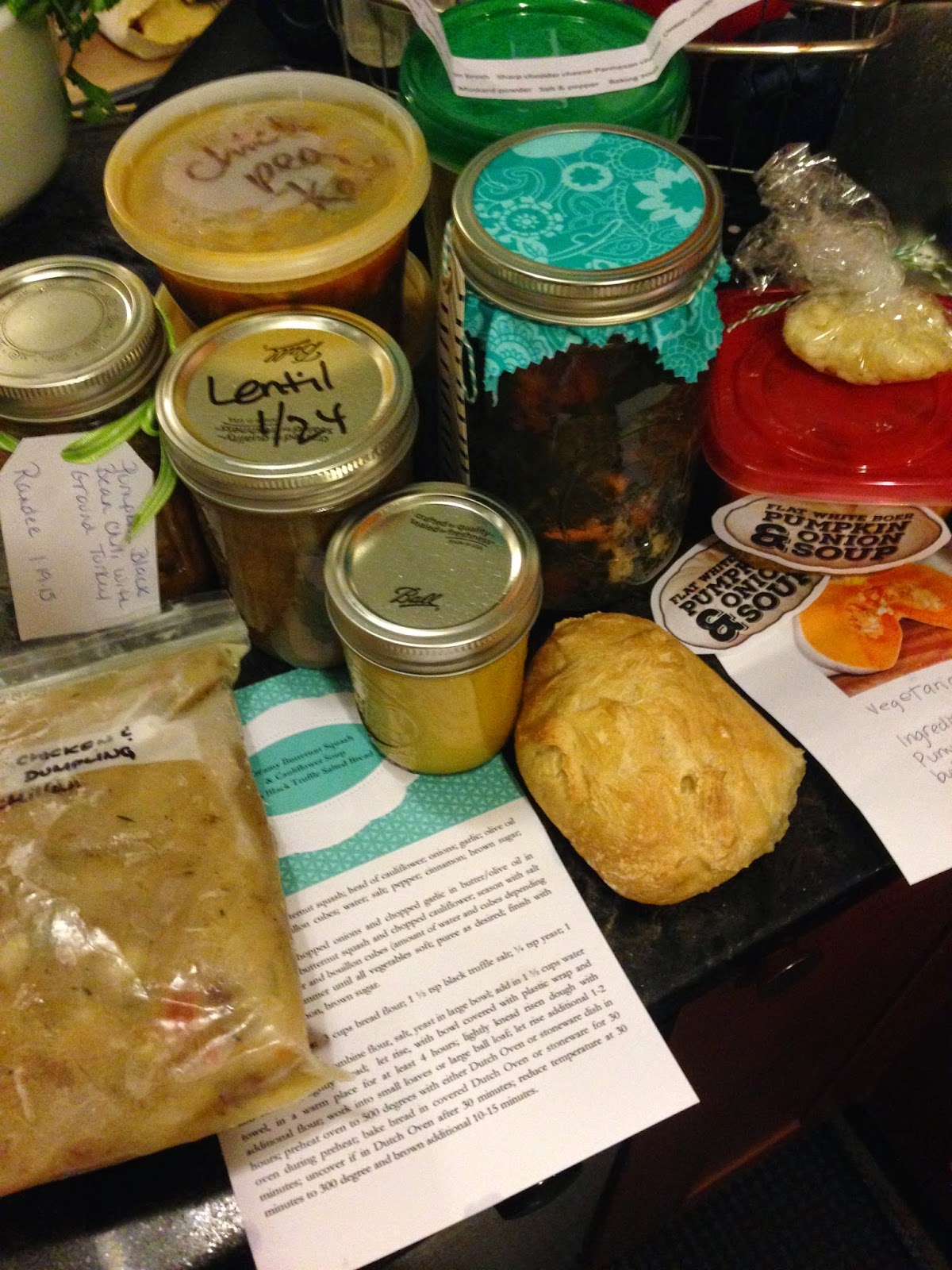 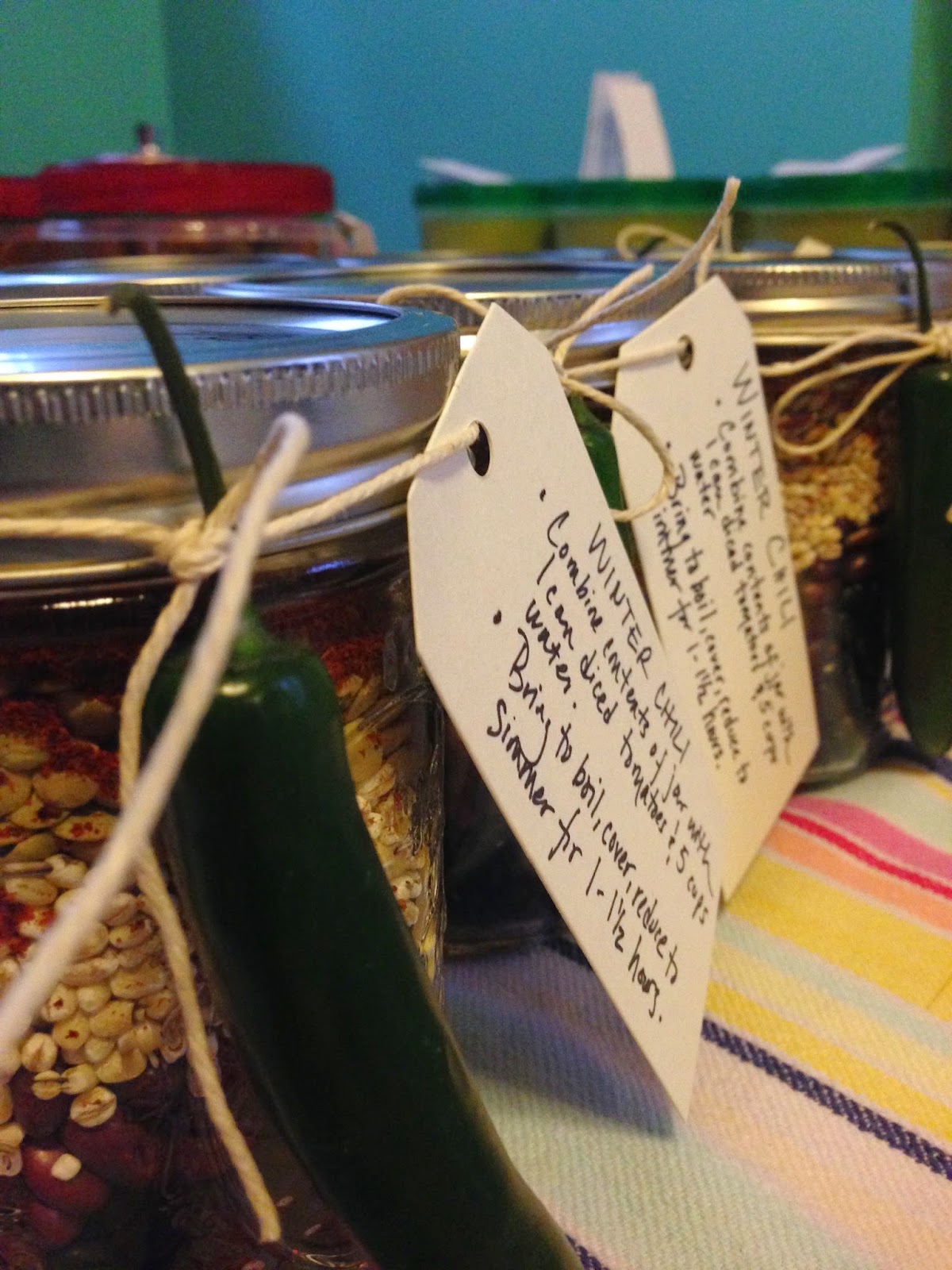 I put together the invite on Facebook, on our closed group page - and many people said they would participate.  The idea was to make 5 to 8 pints of soup and then bring them over on Saturday and trade a pint for a pint of soup, stew or if someone felt like making a casserole, they could make that too.  We had pumpkin and turkey chili; pumpkin and onion soup; lentil soup; broccoli cheddar cream soup; chicken and dumplings; kale and curried chick pea; butternut squash and loaves of homemade bread; Tuscan bean soup; tortellini soup; and my favorite in terms of presentation, my friend, Lori, made a Winter Chili Soup, in a dry pack - she layered beans and grains in pretty mason jars and sealed them.  Tied around the lids, with the instructions/ingredients, was a Serrano chili pepper.  A clever and longer lasting packaged soup to take away.

Our crowd was mostly women, but a few ladies brought their husbands, so we had some male influences and Nate had a few guys to talk Star Wars Legos and show off his buildings and such.  We mingled and sampled and nibbled for an hour or more.  Some of us also enjoyed a late afternoon cocktail or two as I brought out the Firecracker Cherry Bourbon that I still have around from the holidays.  It was a very pleasant afternoon filled with a lot of laughter and good company.  And while this is a lot of work to organize and pull together, I thoroughly enjoyed myself. 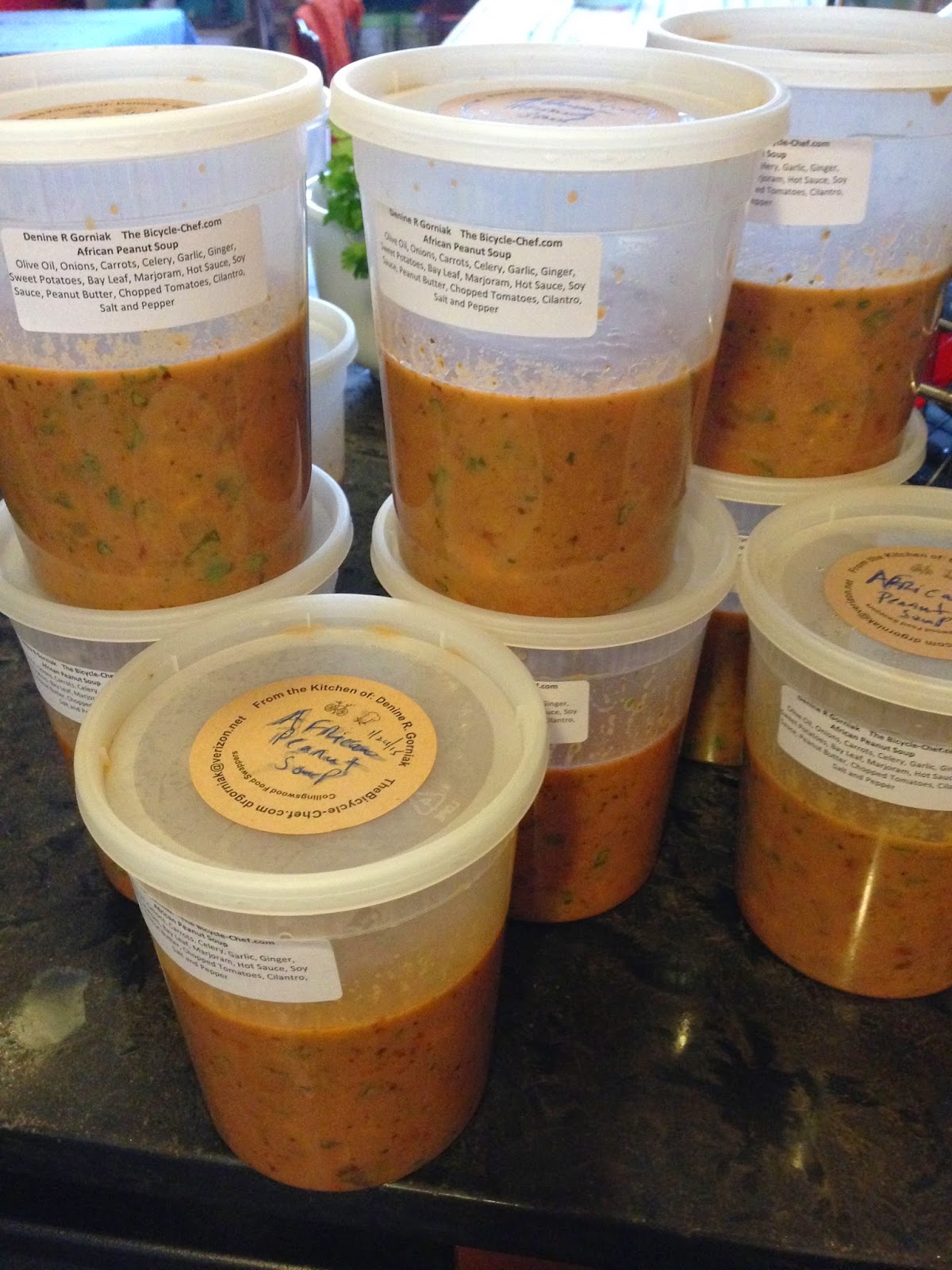 The soup I made was African Peanut Soup, and oldie from my days at working for Jill's Vorspeise in the Reading Terminal Market.  I haven't made this recipe since 2006/2007.  When I pulled out the recipe files, from my teaching days at Williams-Sonoma, I had to laugh at myself and how much I've learned in the intervening years about cooking.  I've also learned so much more about recipe writing.  The benefits of having been a food blogger for all these years.  The recipe is easy with few ingredients and it's vegan.  But to make it taste really good, you have to be patient and coax out of the flavors of the vegetables so as to not to rely on adding extra salt or oil to this.  I wish I knew back then what I know now, that you don't need veg stock, extra fat, extra salt, or other extraneous stuff in your food to make real food taste good. 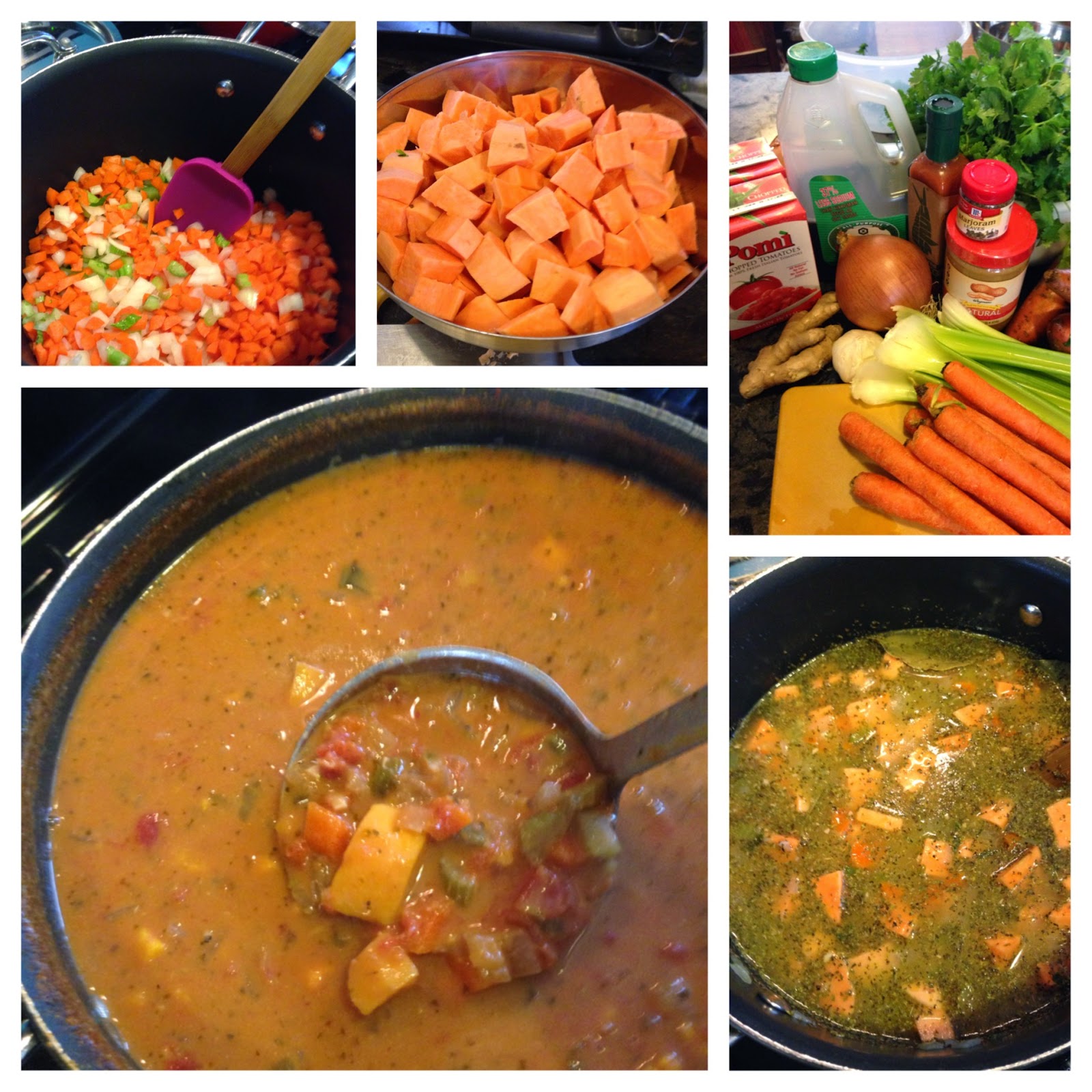 For my swap, I nearly tripled the recipe I had originally written down. I made 6 quarts total.  To re-created it to make it work the way I now know it should work is tricky.  I usually just cook out of my head, tossing in things as I see fit.  Recipes lie.  I try not to lie, but...It's hard to write a recipe exactly as it's actually meant to be made.  Don't worry about exact measurements of the vegetables.  A bit more veggies and a bit less liquid, just try to adjust as you go along and reduce the liquid down if things seem too watery.  Be careful with the salt.  The peanut butter, the soy sauce, the hot sauce, probably the tomatoes all have sodium in it.  I'd say you don't need to add in any more.  And the flavors are going to develop along the way - you'll be surprised how much of a kick this soup has, so be careful with the hot sauce - it can bite! 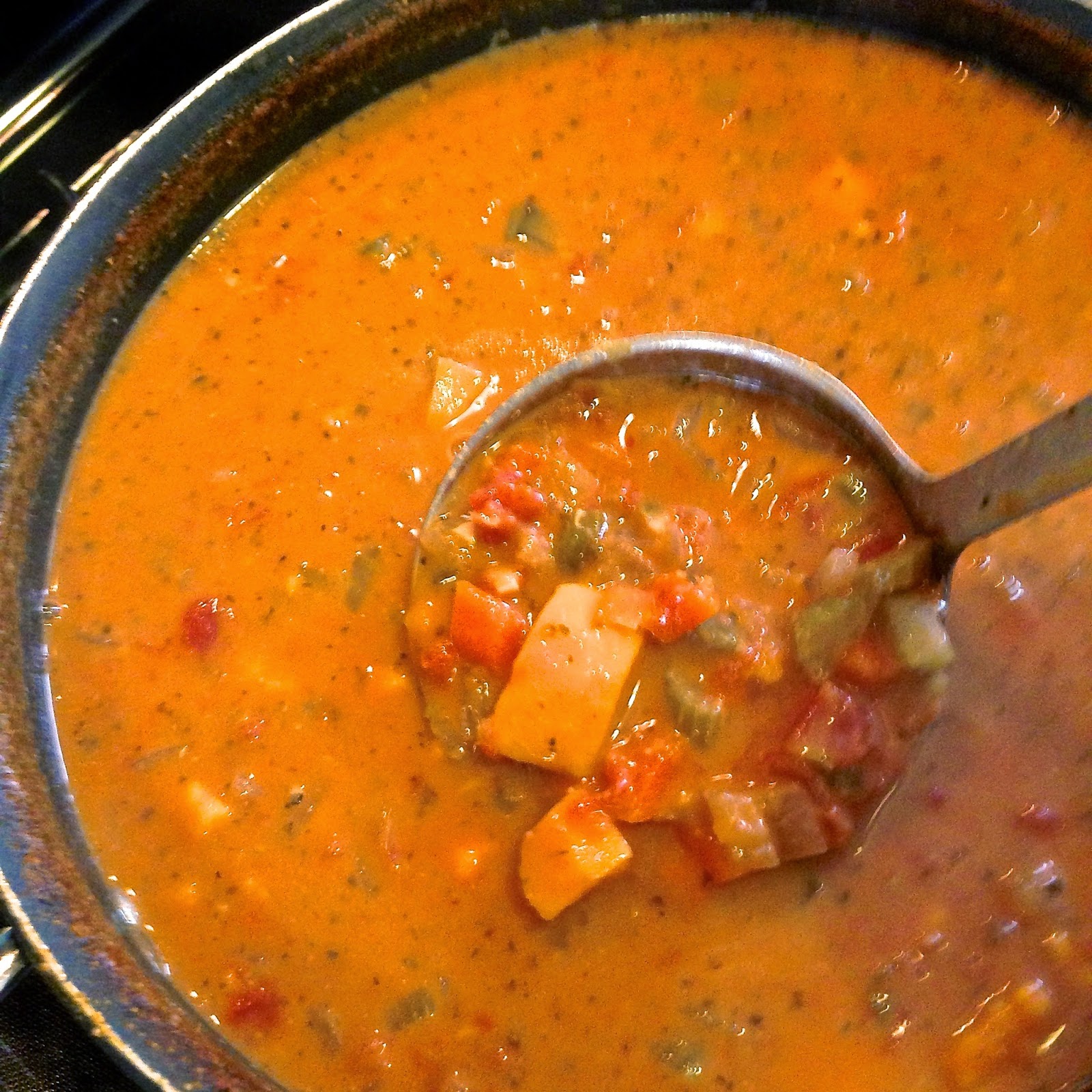