Spirited Swap at The Factory

On Saturday evening, March 8th, Collingswood Food Swappers held a Spirits and Cocktail swap at The Factory.  It was our 5th event since the inception of the group.  All of the swaps have been successful, but this one was the largest attended and one of the best events we I have hosted. I say we, and it is a group effort, but in truth, I'm the Collingswood Food Swappers. Or I'm the face and coordinator of the group; the conduit if you will.  These events wouldn't happen without my organizing them.  However, they wouldn't be as much fun if I didn't have great people participating in the swaps along with gracious hosts to let us use their space for the events.  The Factory is the latest "destination space" for our event.  I hope to make this a reoccurring destination! 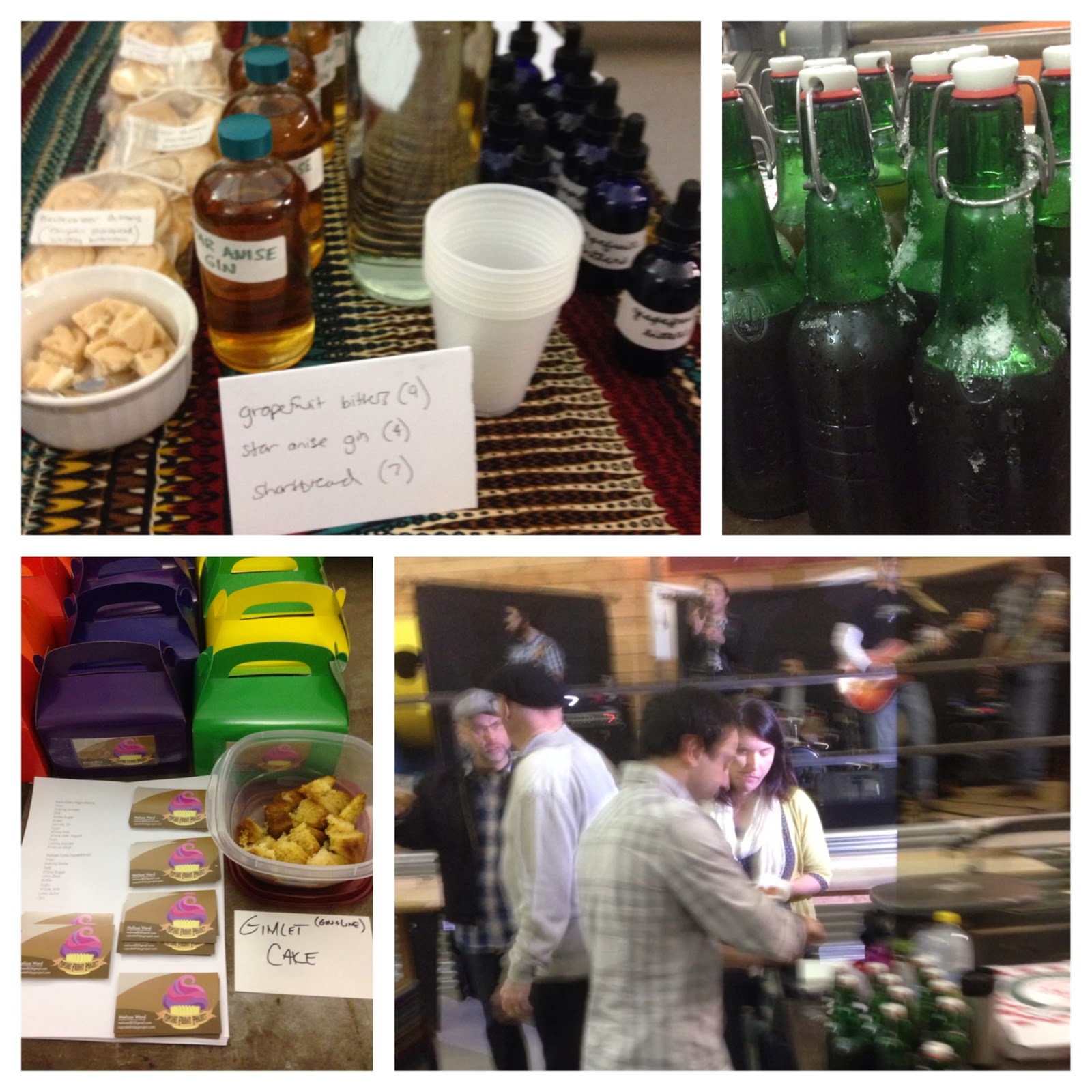 The Factory, located at 13 Fern Avenue, in Collingswood, is the home to the area's largest and most interesting collection of reclaimed and re-working machinery and manufacturing equipment.  The building is the home of the former  Collingswood Movie Theater.  The exterior facade, which fronts on Haddon Avenue, is a gloriously beautiful Neo-Classical Marquee, complete with cherubim, ornate cornices, serifs and pan-musical motifs.  The interior of the building, which is around the corner is  - a shell of a building that's been cleaned, gutted and outfitted into workshop, studio and machinery floor space filled with over $200,000 worth of the best of the 20th Century equipment for wood working, metal smithing and crafting.  There is also studio space for individual use, and an elevated area where bands can play and people can mingle. It is an ideal space for parties and events, provided you don't mind mingle amongst dust and machinery.
I had the idea to have a swap at The Factory for months.  Rather than just wish on the idea, I reached out to the owner of The Factory, Tom Marchetty, and asked him if we could have our next event there. It turned out to be one of the best "asks" I've ever done.  The space was perfect for us.  It also turned out to be a Second Saturday Event Evening; a band, Kharma Train, was booked to play there, creating an instant party atmosphere for everyone who came to the swap, wandered into the space, or just came out to see what was going on for 2nd Saturday.  25 people signed up for the swap, and more people came out to see what we were up to and to learn about us.  People came to hear the band learned about food swaps.  Our already fun event became more festive thanks to the music and perhaps, because we were trading infused booze and home-brews.
This happened just because I asked.  I didn't do much more than that.  Put a few words out there, made some suggestions and brought a bunch of cool people together to gather at a swap.  Fun. Food. Booze. Music.  It was the swap party to end all swaps.  People stayed well beyond our 2 hour swap time.  Now this is a big deal because most swaps last at most, 90 minutes.  You have an hour of mingling and sampling; the swap part lasts at about 20 minutes.  Since people were having so much fun enjoying Kharma Train's music (the band was great and the lead singer has a great set of lungs - a singer with real chops and talent), the party just kept on going.  I won't say people were tipsy but it didn't hurt that we were trading home-brews, micro brews, home-made Kaluha, Amaretto, and my Firecracker Cherry Bourbon.  It definitely aided in making the party a bit more festive for all of us.  I made myself leave at 9 so that I could get home to Liz and Nate. 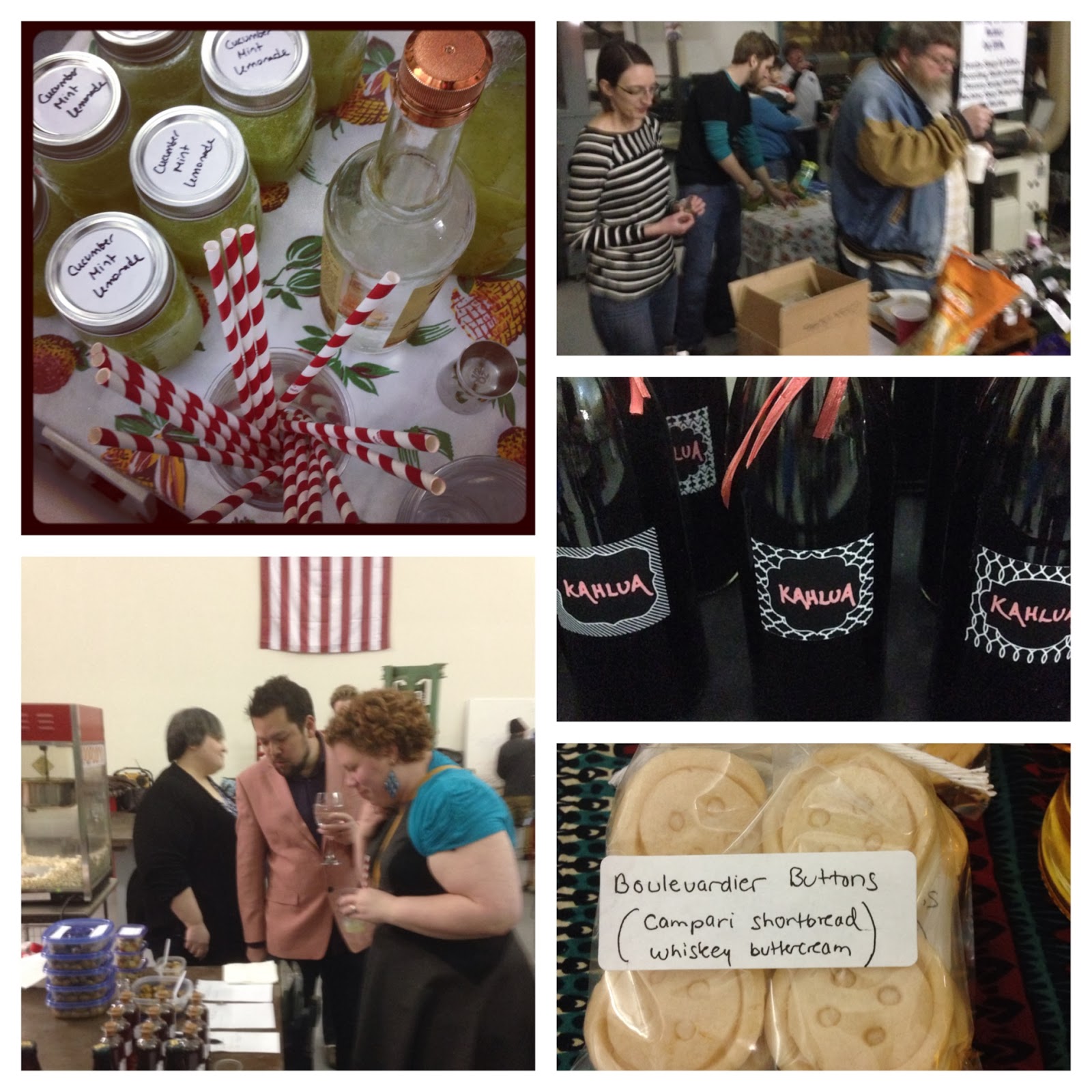 All ego aside, I really do think that the people who come to Collingswood Food Swappers' events are the best group.  Returning friends, new comers, and even "Pro-Swappers" all seem to bring out the best of themselves and their items.  I see that people put effort into their food and beverages as well as their packaging and labels.  I'm a sucker for a well-packaged item, and I ask that people label their stuff.  If for no other reason than knowing who made what, and what's in it.  I've picked up stuff from other swaps where it wasn't labeled.  I remembered what the item was, but after having it for a day or two, I couldn't or didn't know who made it.  I wanted to thank them or write about the foodstuff and couldn't as I didn't know who to mention.  So, I ask people to think about labels.  It's important to say who you are and promote yourself. 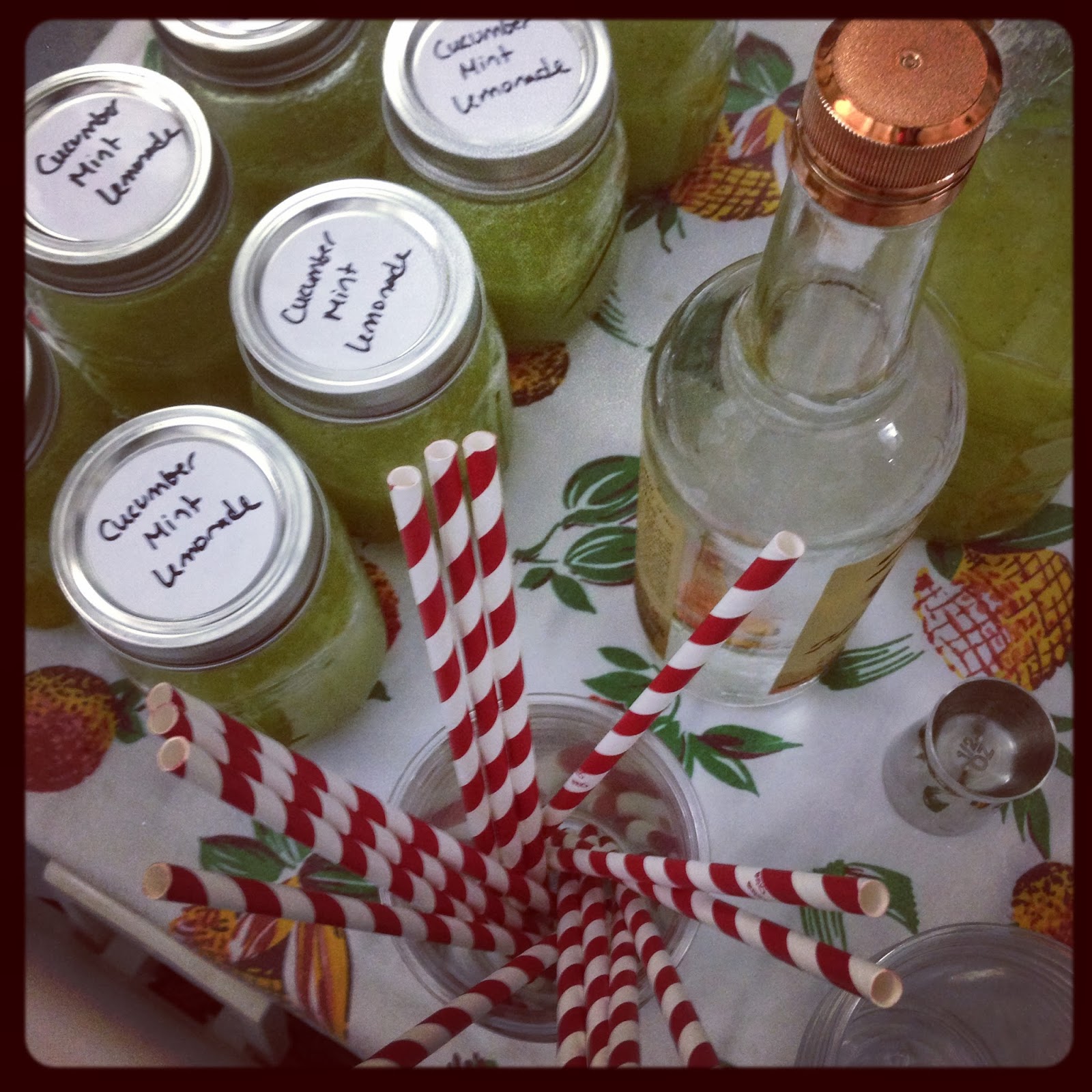 As this swap was billed as a Spirits and Cocktails Swap, people pulled out all the stops with their boozy  and cocktail party nibble creations.  There were several home-brews, all of which are scrumptious.  Two cakes made with either Gin as a Gimlet Cake, or a Kracken Rum Cake, both made by Melissa W. of Cup Cake Friday Project.  I met Melissa at the January Swap in Philadelphia. Turns out she's one of the "Pro-Swappers" who I remember from my first swap I attended last April.  It also turns out she's friends with my friends, Robb and Eric.  Small swapping world! 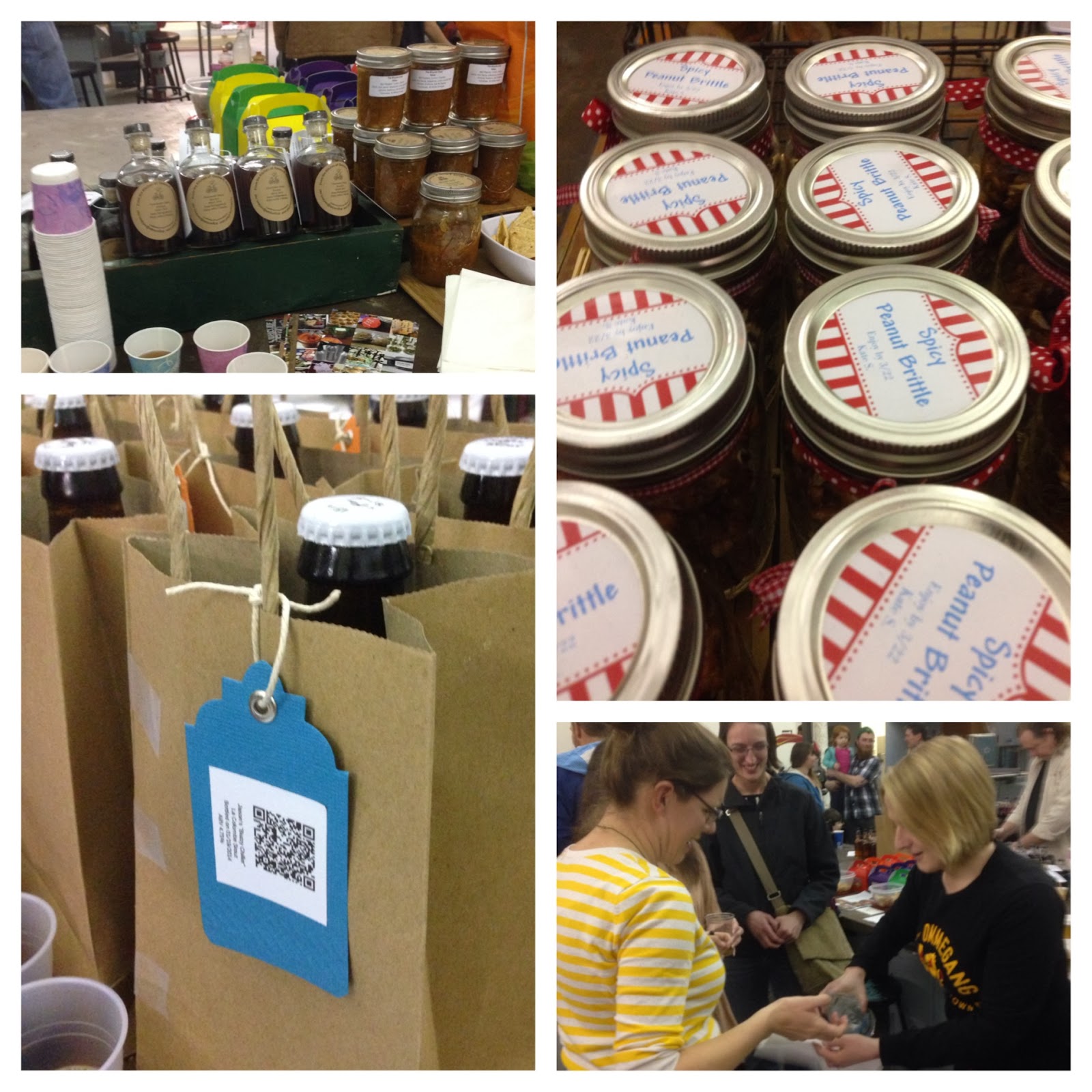 I came home with a plethora of goods.  The aforementioned home brews and a few micro brews.  My friend, Kate's, spicy and sweet peanut brittle. Her husband's good beer (with fun and geekily wonderful Q-Tag labels, that take you to the recipe when read on your phone's Q-Reader app).  Spicy Gingery Mixed Nuts.  Karin S's Maple Pecan Bourbon.  I had the pleasure of meeting Karin at the Philly Swappers event in January as well.  I was so touched that she and her friend, Jill, came over from the City to join in our event.

Robb and Eric brought a 5 berry pie.  It might not have been filled with booze but it sure was good.  Suzanne, a friend and neighbor and one of my first Collingswood Friends who I met through an acquaintance long before we met in person brought an ancient Roman Wine.  The recipe was ancient, not her wine! 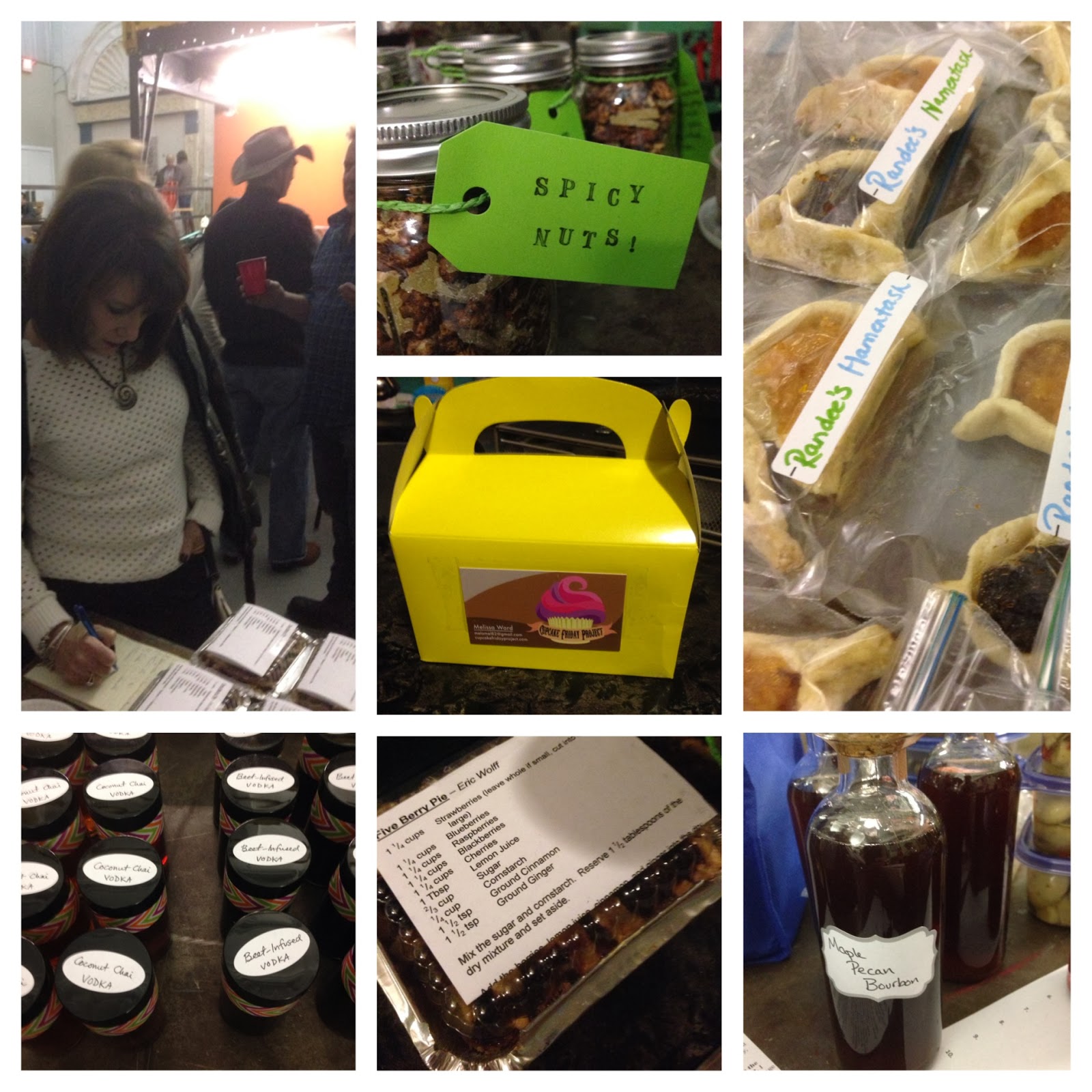 Other people I met and traded goods with were, Randi and John, who brought home made and timely, hamentashen and a nice selection of micro-brews. Vasilly and his wife, with beer and infused vodka drinks.  Linda and her amaretto.  Lesly and her husband's Cucumber Mint Lemonade with Tito Vodka.  And my friend, Lori, of the Mardi Gras party fame, with her very popular and gorgeously bottled home-made Kahlua.

The next swap I'll be attending is the Philly Swappers Swap, again at the Reading Terminal Market, in April.  One year exactly since the very first swap I ever attended.  Which means OUR Group will be celebrating our first year anniversary in May.  A YEAR! 5 Events.  Countless jars of salsas, jams, pickles, and now booze.  It's a milestone.  To commemorate our turning one, I'm working on plans for the big event.  Another swap with a theme.  Keeping it interesting and diverse.  Stay tuned and follow us on Facebook! http://Facebook.com/CollingswoodFoodSwappers
Email Post
Labels: beverages CollingswoodFoodSwappers FoodSwap friends