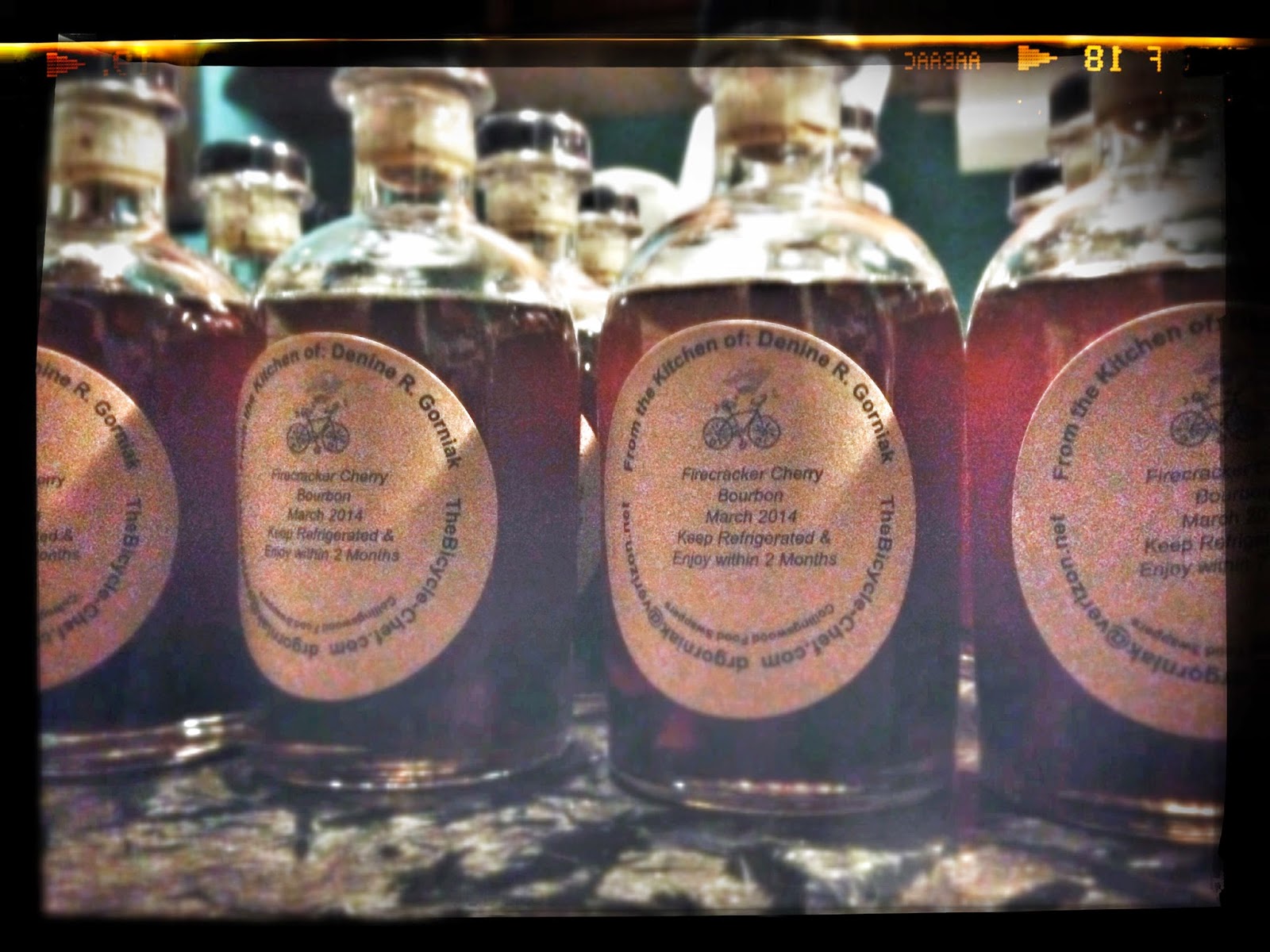 At the last Collingswood Food Swappers event, on Saturday, March 8th, I made an infused bourbon exlir that everyone who tasted it raved about it!  The bourbon was infused with dried cherries and jalapenos then mixed with a  brown sugar simple syrup that was infused with cinnamon, cloves, candied ginger, more dried cherries, and star anise.  I strained the syrup and added it to the strained bourbon.  It wasn't hard to make nor did it take very long, other than planning ahead and getting the bourbon started with a bag of cherries and handful of very hot jalapeno pepper, for about a month of infusing.
The idea for this flavoring came from a few sources.  Years ago we had a dear friend named, Sally Weida.  She loved having a jar of apricots and cherries soaked in either Southern Comfort or brandy.  For holidays, I made her a batch.  By the time you got to the end of the jar and ate the last of the apricots and cherries, you would be tipsy.  The fruit was potent!  Another friend, Jen, somehow though of the idea to put jalapenos into bourbon to give it a spicy kick.  I tucked this idea away into my brain to make into a cocktail.

When I dreamed up the idea to do our last swap as a Spirits and Cocktail Party food and beverage event, I knew I wanted to combine the two flavors into one delicious drink.  Taking the drink one step further, I started thinking about limoncello and other sweet cordials.  Reading  about other whiskey or bourbon inspired drinks then lead me to a story about a home-made Fireball Cinnamon Whiskey concoction.  Hence the name of my drink, Firecracker Cherry Bourbon.  A new drink is born! 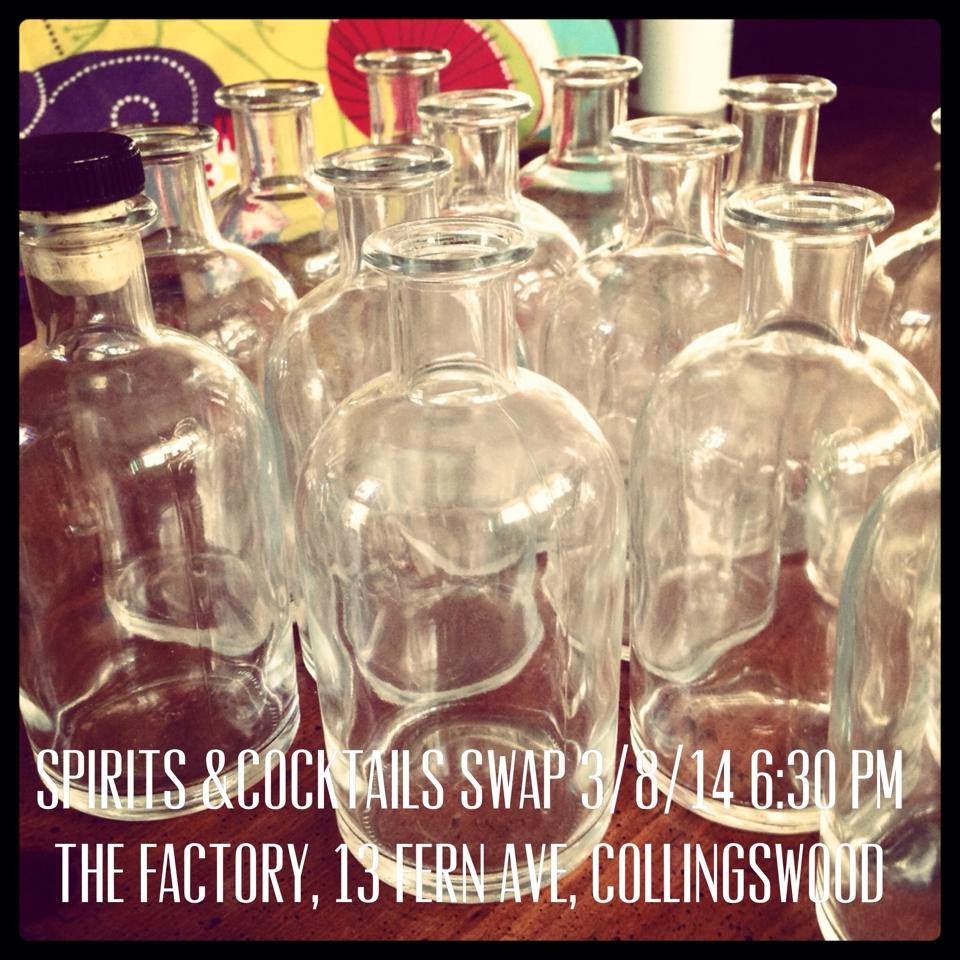 The bottles I bought were from SpecialtyBottles.com, the vintage style apothecary bottle, 8.5 ounces (which later I realized was TOO BIG!), along with plastic topper cork stoppers. To add to the vintage look I printed my labels on round craft paper labels from AVERY.  I also made ingredient tag labels which I tied to the bottles.  One final touch was using the plastic protector toppers that are slipped onto the bottles tops then shrink wrapped closed using a hair dryer. 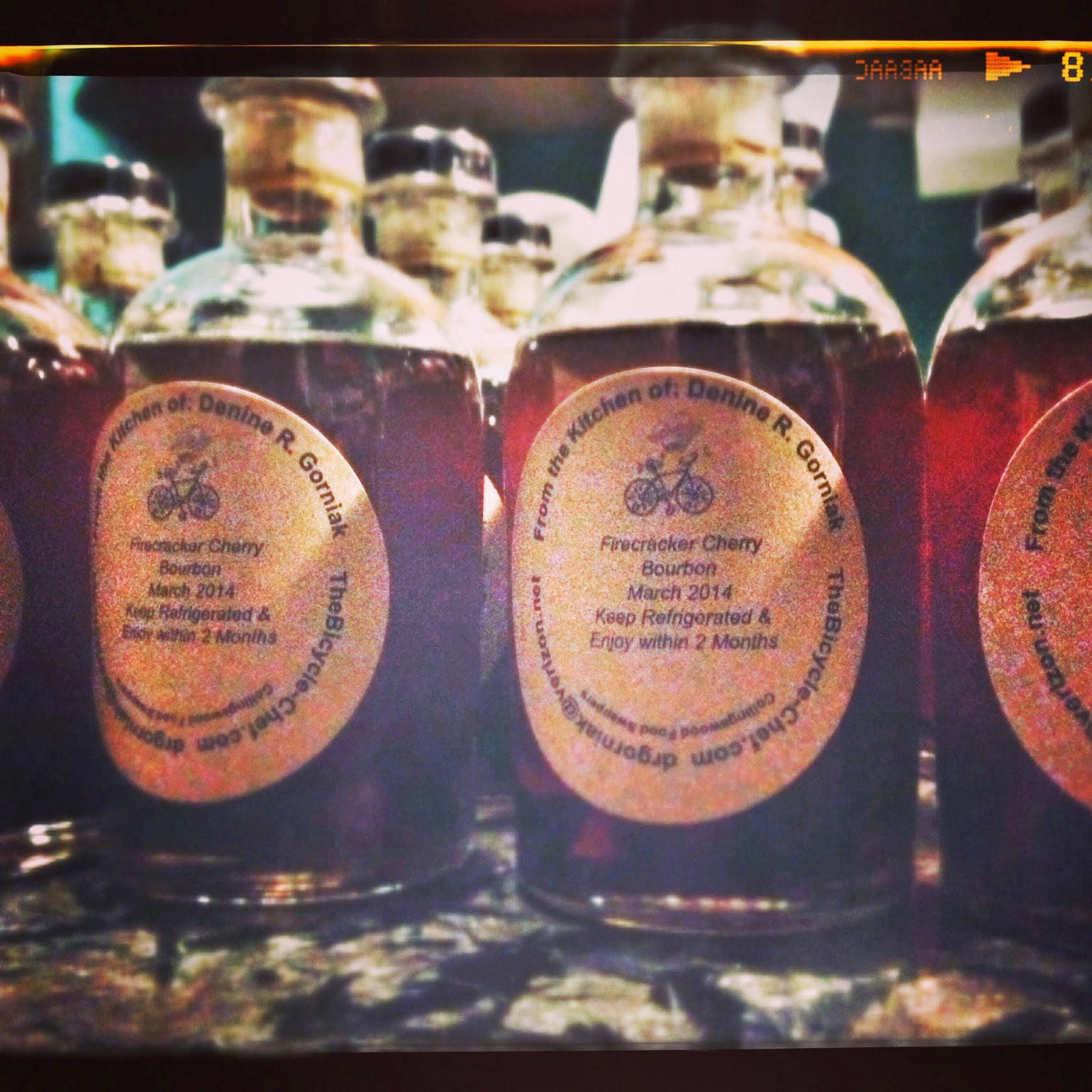 This was a rather fancy and expensive beverage swap item.  I'm not sure of the final cost, but I'm thinking these cost me about $5 a bottle once I was done.  Would I do it again? Yes. But next time, I'll think about ways I can cut back on the expenses and do this in larger quantities.  As I was making the final product, I didn't have enough of the mixture to fill all 15 of my bottles and have a sampling bottle.  I had to make more syrup; I had started out with about 3-4 cups of sugar/water.  I also needed more bourbon.  Jack Daniels to the rescue! I sacrificed my stash of Jack to add to the mix.  The other expense was dried cherries.  These are not cheap.  This may become one of my signature drinks though I'm inclined to keep this as a very special give-away. 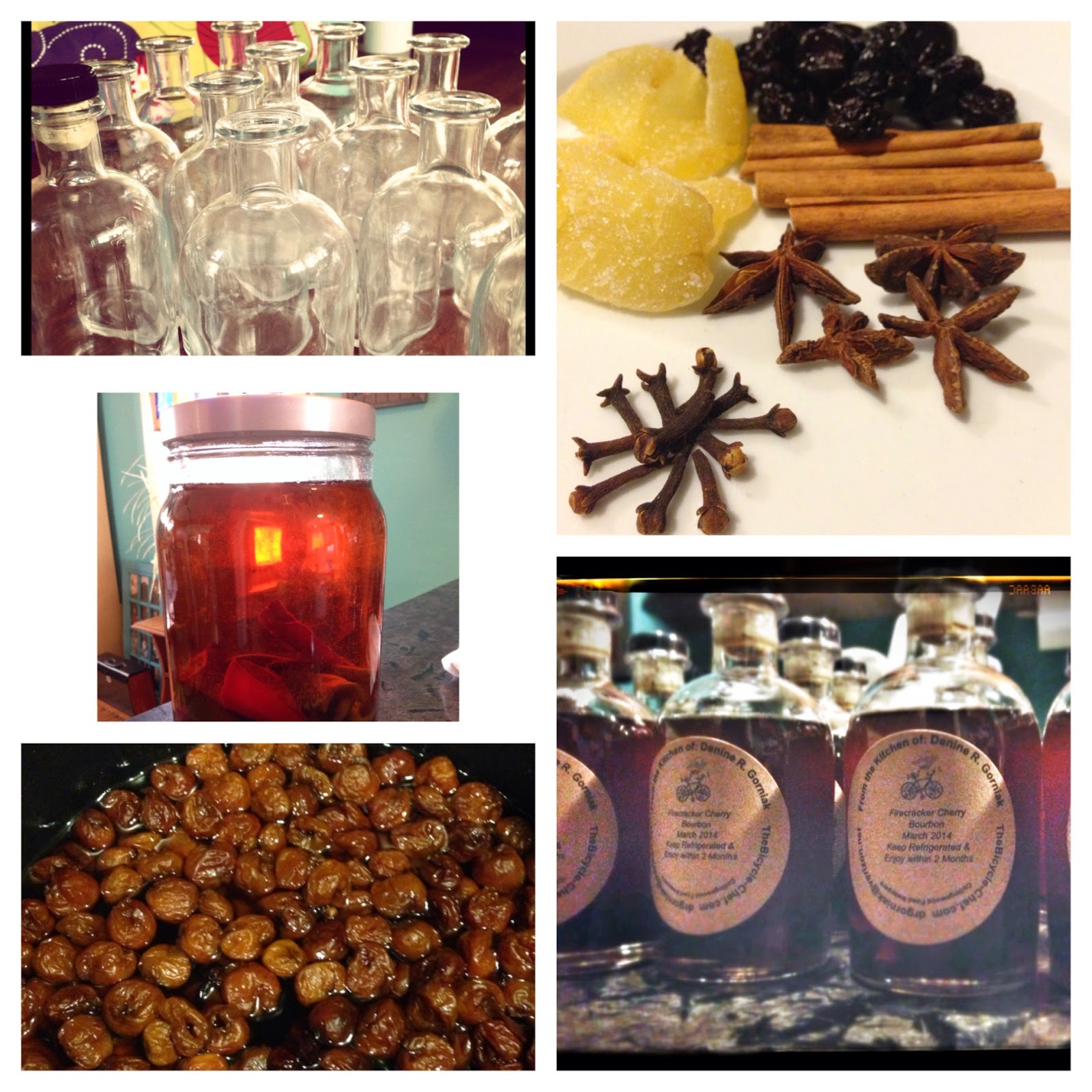 To make this yourself, you will need the following ingredients and items.  It will take about a month for the flavors of the cherries and jalapenos to infuse into the bourbon/whiskey.  The syrup can me made the day before and then added to the bourbon.  I found that once the simple syrup was added to the bourbon, it needs to be refrigerated and used within 2 months.  The drink can be enjoyed as is, served cold, or over ice, or with a spritz of seltzer added.  My friend, Leanne Lindsay of Tinsel and Tine said it was a powerful elixir.  I think most people who sampled it would agree.  I even had some people comment that it was one of the best things they ever imbibed.  I'm not exaggerating.  Maybe they were but who am I to complain?!