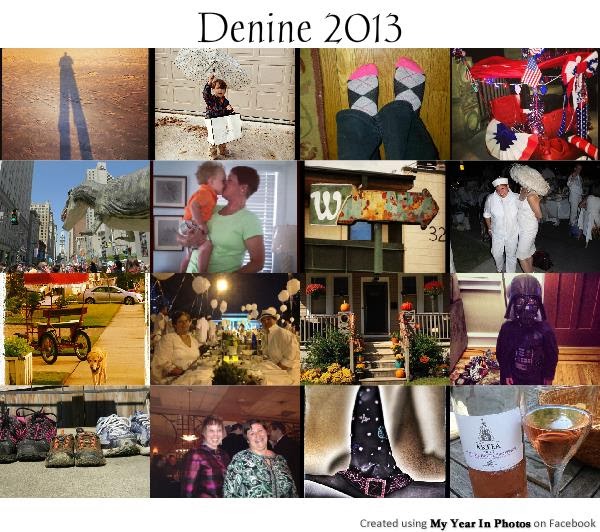 A few weeks late with this, but here it is, my annual, Year In Review.  I love this 30-some question and answer format as it gets me writing, ruminating and appreciating the life I lived during the previous year.

1. What did you do in 2013 that you'd never done before? Well, the major thing I did, or rather, had done to me, was to have a hysterectomy.  Friday, December 13th.  Let's not discuss the superstition of that date...

2. Did you keep your new year’s resolutions, and will you make more for next year? No. Never do, never will.

3. Did anyone close to you give birth? Another year of round 2 & 3 with our friend's having babies.  Twins, Vivian and Zachary; Harper; Maggie.  And lots of other friends and acquaintances.  Now that we are in several Mom's Groups in Collingswood, our circle of kids is ever growing.

4. Did anyone close to you die? Yes.  Oh, so sadly, yes.  A few lovely people I know from my workplace - members of the congregation.  But the biggest loss I experienced was the very sudden passing of my dear friend, Fabrizio, our former neighbor from South Philly.

5. What countries did you visit? I've got to change this one - countries, no.  Places, yes.  Downashore - to Sea Isle City, NJ for two weeks, and a trip out to the Southwest to Colorado, with a 24 hour excursion to Sante Fe, New Mexico during our visit in Pueblo, Colorado.

6. What would you like to have in 2014 that you lacked in 2013?  BETTER HEALTH! Besides having to have a hysterectomy this past year, I also had some major back issues that sidelined me from biking since the end of June.

7. What dates from 2013 will remain etched upon your memory, and why? The two dates of the two Dinner in White/Diner en Blanc parties we attended - in Late August and Early September.  My first and second food swap events in May and June. The May event was my inaugural swap, and the June event established the Collingswood Food Swappers as an official group.
8. What was your biggest achievement of the year? Starting the Collingswood Food Swappers group. It started out as a whim, an idea of wanting to do a food swap sooner than waiting for another event to be organized by someone else.  My first swap was so successful that I actually got media coverage several times!

9. What was your biggest failure? Not a failure per se, but I did not attempt to do healthy things for myself, culminating in my complete body breakdown - the back, a pressed nerve and spine injury; the fibroids that made it necessary to have a hysterectomy; loosing muscle and strength from not exercising...

10. Did you suffer illness or injury?  Um, ah, see above. Too many illnesses and injuries. I truly feel middle-aged.

11. What was the best thing you bought? A Kindle.  It's gotten me back to reading.

12. Whose behavior merited celebration?  This question is annoying to me. SKIP!

14. Where did most of your money go?  Doctors, co-pays, medicine and baby sitters.

15. What did you get really, really, really excited about?  Food Swaps! I discovered this phenomenon in April and quickly became addicted to this interesting hobby-way of life.

16. What song will always remind you of 2013? Why, the song of the Summer of course - Blurred Lines by Marvin Gaye Robin Thicke...
17. Compared to this time last year, are you:
a) happier or sadder? about the same, mostly happier
b) thinner or fatter? fatter, less muscle tone, but working on it...
c) richer or poorer? Hmm, financially speaking, about the same, but w/less disposable or net income.  In spirit, richer. In friendship, richer.  In love and family, richer!
18. What do you wish you'd done more of? Loving and biking

19. What do you wish you'd done less of? Visiting Doctors.

20. How did you spend Christmas? Recuperating.  It was a week and a half post-surgery and I was still taking pain pills.  I slept a lot and sat, under blankets most of the day. It was the first Holiday Season in decades where I didn't cook, clean, organize or orchestrate a thing and it was glorious.

21. What was your favorite TV program? Sherlock, the BBC Version; Elementary (the USA TV Version of The Sherlock Holmes stories); House of Cards.

22. Do you hate anyone now that you didn't hate this time last year? OH YES. And that's about all I can say about that.  Well, I'll say this. I am extremely disillusioned and disappointed in friendships that I thought were more than they are in reality.

23. What was the best book you read? Orange is the New Black, by Piper Kerman; Eat, Pray, Love, by Elizabeth Gilbert.

24. What was your greatest musical discovery? Macklemore.

25. What did you want and get? No more menstrual cycles.  Hey, if a gal has to have a hysterectomy, at least there's an upside to it.

27. What was your favorite film of this year? I can barely think of any movies that we watched, old or new. I guess, ARGO.  We bought it on DVD as soon as it was released, before the OSCARS.  It was taught, well directed, and suspenseful, even though you know exactly what is going to happen.

28. What did you do on your birthday, and how old were you? I turned 46 in 2013. We had dinner with our good friends, Roger and Astrid, and Jen Check.  Astrid made me a scrumptious chocolate raspberry cake. We went to Zeppolli, the best restaurant in Collingswood (or anywhere in the area frankly); Nate woke me up in the morning singing "the birthday song" to me. It was a lovely day.

29.What one thing would have made your year immeasurably more satisfying? Health; time; chances to do more family things.
30. What kept you sane? Cooking. Teaching. Writing. Family.

31. Which celebrity/public figure did you fancy the most? Another question I need to nix. Moving on… OOH, wait! The Pope, Pope Francis.  If he's the real deal, living up to his Saint  namesake, then I might consider admitting I was once Catholic.

32. What political issue stirred you the most? Gay Marriage.  It's marriage, period.

33. Who did you miss? Fabrizio.  I think of him every time I get behind the wheel to drive, especially on highways and on long-distance drives.

34. Who was the best new person you met?  It's not just one person, it's many.  Two years of living in Collingswood and we have formed some good friendships.  Playdates abound.  As of this writing, and I know I'm skipping way too many important people here, but one person stands out - a woman we met through some other friends, named Lori McCleer.  She has come to a few food swaps and while I was recuperating from the surgery, she (amoung so many people) brought us platters of food.  I don't know Lori well, nor have I known her long.  But she went above and beyond and out of her way to bring us homemade Pirogues, Kielbasa, and the world's best pound cake from Stock's Bakery in Kensington. And then, she organized a Christmas Carol sing.  She rented a trolley, and got over 40 people to go all around Collingswood, singing Christmas Carols at people's house and at local businesses.  The trolly stopped at our house and it was one of the most heart-warming, spirited events I've been privileged to experience.

36. Quote a song lyric that sums up your year. Can't Hold Us by Macklemore and Ryan Lewis