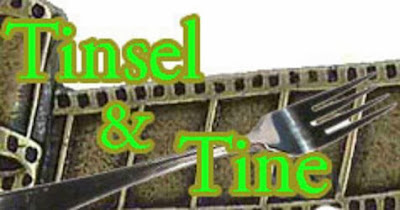 One of my best blogging friends is also one of my longest friendships.  My friend, LeAnne, and I met back in late 1995 at a theater company in Philadelphia.  We were young, eager, impressionable and into all sorts of artistic, musical and theatrical things.  The mid to late 1990's in Philadelphia was an amazing time to work in theater due to the surge in small theater companies forming, mid-sized companies growing and in general, the economy allowing the arts to flourish.  LeAnne and I worked in the office, at the theater, doing any and everything that needed to be done.  I was hired as a bookkeeper/office manager; Leanne was the Artistic Assistant.  In addition, we were box office staff, house managers, prop assistants, cabaret staff, artistic liaisons. concessions staff, script readers, workshop proctors…you get the picture.  We probably weren't paid top dollar but we were happy and having fun!  18 years later, we are still happy and having fun but we're doing radically different things in our lives.  Well, sort of.  I'm still doing bookkeeping as my day job gig and Leanne is doing office work for hers, but in-between, we blog, a lot.
LeAnne started blogging for a class assignment a few years back.  In her funny, irreverent style, she was challenged to think of a pithy blog name and she blurted out, Suck My Pretty Toes!  For a year or two, she blogged under this moniker, writing about her favorite pastimes, eating and seeing movies.  As her audience grew and her hobby became a bigger passion, she changed the name over to Tinsel and Tine Reel and Dine, to reflect her blog's mission.  Tinsel being Hollywood, aka, Tinsel Town.  And Tine for the tines of a fork.  Making it a bit more clever, she rates her food and restaurant reviews on a scale of fork tines; none, one, two, three, four, as a restaurant or the meal deserves. 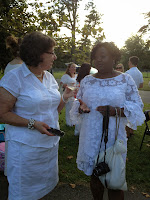 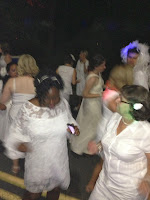 LeAnne's blog is fun, insightful, honest and REAL!  Unlike other movie review sites, LeAnne injects a lot of her quirky personality into her reviews.  She's not afraid to say what she really things and she's not so star-struck that her enthusiasm gets in the way of giving an honest review of movies.  She asks unique questions and tries to go out of her way to be original when interviewing actors, directors, chefs or restaurateurs.  The same love of the live arts that she had 18 years ago when we were shuttling around semi-famous Cabaret Music Stars is still alive in her today. 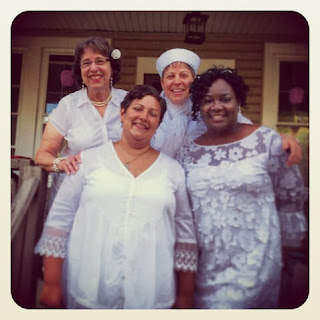 Given that my love of food has taken me from all sorts of restaurant and catering work, to culinary school and into writing and teaching, food is a real connection between LeAnne and I.  We've dined at many places and have shared a few co-reviews together - The Dandy Lion; Diner en Blanc; Collingswood Pop UP Gala in White, to name a few.  We've shared many a meal together in my home and LeAnne was also the "blogger-in-residence" at my house (The Top Gun Abode) this past summer.  Ours is a friendship formed over cocktails, cigars, great food, musical theater and many many laughs.  When I heard that she was blogging, I invited her to join up with an inaugural luncheon meeting of a group of other women bloggers, spearheaded by my friend, Barbara.  I've written about the group on numerous other posts - The Bloggstress Network.  LeAnne fit right into the group, seeming to have more in common with this group of ladies than I, the odd gay duck in the crowd!

I'm proud that we've remained steadfast friends over the years.  I'll never forget LeAnne telling me once, way back when we worked together that she didn't think you made real friends after you left school, high school or college.  At that time I was convinced, as I still am, that it wasn't true, that you could make friends at work, in your, ahem, older non-college years.  We were both right.  It is harder to make friends as you get older because you get busier, and your life fills up with career, family, and of course, our blogs, but…we did manage to forge a friendship that passed the test of time!  Now we share not just memories of our lifetime friendship, we share a bond through writing, food and film.  Plus, she is my movie connection, keeping me informed about all sorts of movies.  LeAnne is my own personal Roger Ebert "at the movies" since I never get to see anything in the theaters these days.  Do yourself a favor and like, follow, read and learn all about LeAnne by reading her blog and following her on Facebook - she's the friend you need to have in your life, even if you're just a fan!