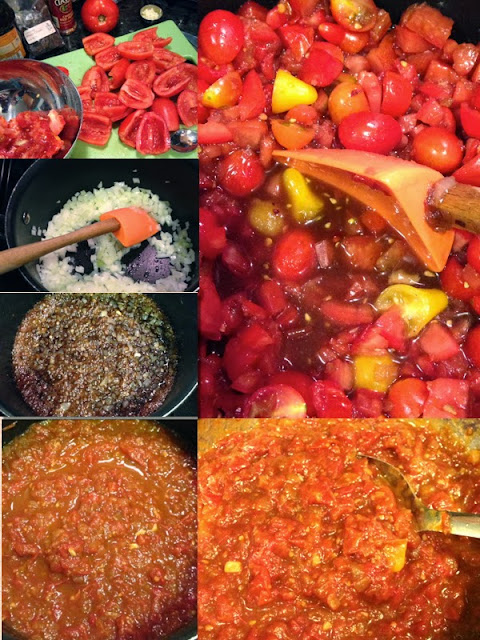 For my cooking class this week, I had a menu featuring the best of the season - figs, apples, pears, and pumpkin seeds, all served in salads, grilled pizzas and in rustic fruit tarts.  I wanted to share this recipe for tomato jam - a sweet, tart, spicy, tangy savory jam that works well as the base for a pizza, as an hors d'oeuvres or for a chicken or fish dish.  It's a relatively straightforward recipe; a little bit of chopping and a few hours of simmering.  It's a bit of a set it and sort of forget it recipe.  The only special thing you need for this recipe is some patience to wait out the cooking time.

The recipe is a "whisper down the lane" recipe - I found it on a blog called Garden of Good Eating.  The writer found it from Marissa of "Food in Jar's" cookbook, who in turn found it and took it from a recipe by Mark Bittman.  This is the 4th version of it. I added the onions, brown sugar and balsamic vinegar, omitted jalapeños and cumin.  The recipe works - no matter what version you use!

Update September 2014:  I roasted my tomatoes for a few hours, in a very hot oven, until they were completely cooked down.  It was a way to use up half a case of plum tomatoes.  I cleaned them, cut the tops off, cut them into chunks and then tossed the tomatoes, along with a few chopped onions and a head of smashed garlic clovers, and a bit of olive oil into a 450 degree oven, and roasted the tomatoes until every bit of liquid was reduced. The tomatoes became so concentrated they were sweet and sticky.  One batch I turned into tomato paste.  Another went into the tomato jam.  I did it over 2 nights, as the roasting took close to 4 hours.  Proceed with the recipe, sautéing the onions and garlic, adding in the brown sugar, ginger, cloves, red pepper flakes, etc.  You won't need to cook down the jam nearly as much, since the tomatoes are already cooked down.  The point of doing it this way is to create a deeper more complex layer of flavor.  Before I finished canning the jars, sealing them with the lids and bands, added a half teaspoon of bottle lemon juice to the small 4 ounce jars and 1 teaspoon of bottled lemon juice to the 8 ounce jars.  Seal, tighten the bands and water process for 20 minutes. 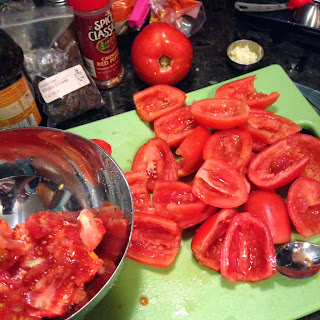