OMG! I have had these photos in a draft post for over a month and a half! And I'm about to go to the South Jersey Food Swappers next food swap this coming weekend.  So much for being on top of my posts.  The last weekend of August, over Labor Day weekend,  Liz, Nate and I took a ride down to Mays Landing - which is about 20 minutes away from the beaches of the Jersey Shore.  We went to the South Jersey Food Swappers event at Connie Perk's family farm - One Flew Over Farm.  It was a warm, bright and sunny day. It was also a day filled with great food at a swell location for a swap.  A full month plus later, I'm still remembering how much fun we had on the morning of the swap. It was delightful to be a participant and not a host. I met a bunch of new people, a few of whom are followers of my group, Collingswood Food Swappers.

I am always amazed at the products and packaging of other people at all the swaps at which I'm a participant.  This swap in particular really run the gamut of goodies.  Home made detergents and goats milk soaps; creams, scrubs, bee's wax candles.  I felt that my product wasn't nearly good enough! I brought my chocolate zucchini bread - tweaked and made more luscious with the addition of more cocoa powder in the batter.  Swappers are seriously into these events. It's not a sport - it's a way of life.  This is especially true of the group of folks I met at Connie's home and farm.  One Flew Over Farm is a beautiful place - a few acres of land set in the woods and pine scrubs of the South Jersey Seashore area.  Connie and her family tell me that the farm is too large for them to maintain on their own for farming, but it's also too small of a farm to be sustainable as a commercial enterprise.  Swapping comes in well for them, as they can trade, barter and swap all sorts of consumables.  Swapping isn't a hobby it's a full-on way of life for Connie and the people I me.
I was truly impressed by this way of life, even though I know that it can be a difficult livelihood.  The whims of the weather and growing season; the expense of running so much land; paying one's electric bill and getting food stuffs put up for the season - it's hard work.  At my last two swap events, I've met a few South Jersey people who have these smaller farms.  In my Martha Stewart/Williams-Sonoma inspired fantasy life, I think I would love to have a huge garden, chickens, bees and maybe a goat or few sheep.  The reality is I don't know that I could step up to the challenge that the farming life demands. I admire their drive and tenacity.  The spoils of their hard works get enjoyed by all who come to the swaps. 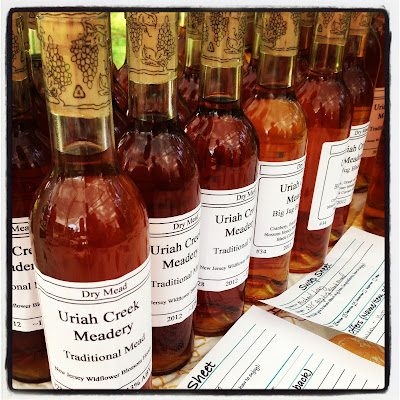 One of the more unusual yet tasty offerings was home-made mead wine.  The vinter's name escapes me now, but the gentleman who brought these bottles had cases of the Uriah Creek Mead - in traditional and sweet varieties.  I have a bottle in my "wine cellar". I'm looking forward to sharing it at my next gathering.  One person I met suggested that I use it in a mimosa at a brunch! 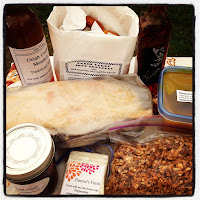 The take home - I really came away with some great items. Mead. Soft pretzels with a beer cheese dip. Home made soup. A phenomenal granola. A homemade goat's milk soap by Painter Farms.  A sweet and slightly savory cranberry compote (which I used in a chicken cacciatore recently!); flavored vinegar; peacock feathers - from Connie's peacocks; and my favorite - a loaf of bread that was an "English-style Muffin Bread" - when you sliced and toasted it it was so much better than any variety that Thomas' could ever even try to create. The English Muffin Bread and the granola lasted maybe to Labor Day! 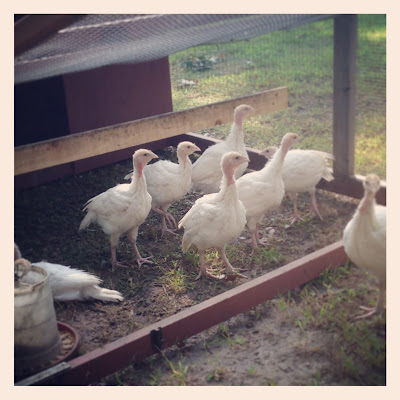 During the swap - Nate and Liz got to wander around the farm and play.  The farm was like being at a miniature children's zoo. Sheep, goats, chickens, turkeys, wild peacocks, maybe cows? I can hardy recall the entire menagerie.  The flowers were abundant and the butterflies were plentiful. There were giant wooden trains, out-laying barns and sheds, and most fun of all, giant dirt hills for Nate to climb.  A few people brought their kids to the swap; Nate had kids to chase and boss around!

Every swap I've hosted and now the 2 I've attended have all been unique, each one offering great items. I've met so many interesting people who I otherwise might never have had the chance to become acquainted.  Swapping may be a past time for some, a way of life for others, but for me, it's been an extraordinary opportunity to be a part of a movement.