I'm "borrowing" an idea that my friend, Lee, started doing on her blog, WalkaboutPhilly.wordpress.com  Lee has an iPhone and started taking photos with it and then she used the Instagram ap to make her cool photos even cooler.  Now that I have an iPhone, I too enjoy making photos look a bit cooler with the ap.  I've had the phone for month and have almost 200 Instagram photos, and over 700 regular photos.  In a month!  You would be surprised at how many photos I take every day and how many blog ideas I have but never get around to writing or posting.  So, in the spirit of taking a good idea and making it into something of my own - I hope to do a post a week of my photo findings.  They might not always be Instragrams, nor might they be street art finds, but that is where my photographic eye tends to wander.

The photos that I tend to take are inspired by street art, architectural details, or fashion.  I've been blogging and posting about this for years now.  I just haven't been as consistent with my posts.  Mostly I wander around Rittenhouse Square, as I work in the area and take the same routes weekly, or daily as my habits are fairly predictable.  Even walking the same streets, week after week reveals something new to me. New stickers and street art pop up weekly.  Or I happen to notice some building detail because I looked up, down or sideways at a high rise.  You never know what you'll find.
A new series of street art stencils, some "come-on" phrase with a slash over it has been spray painted on the sidewalks around the city.  Some say, "Damn Girl" or "Hey Sexy".  Other's are a bit harder to discern.  As far as I can tell and from what I read, it's part of a series of art statements to draw attention to the way women are treated and objectified.  Street art as morality lesson.  Constructive temporary destruction.
At 17th and Chestnut Street is an old department store building.  Originally it was Bon Wit Teller. Then it became Daffy's.  It's been closed for about 2 years now, and I hear it's going to be made into condos. The building may have been another department store before Bon Wit's - I'll have to look into this.  The building is interesting and there's an old "ghost sign" way at the top on the side of the building.  The thing I find most interesting about the location is the clock in the sidewalk outside of the building.  For years, the face of the clock has been broken.  The glass has been smashed and cracked for as long as I can remember.  I remember the broken clock face more than I remember it working.  So much so that I don't even remember what the clock looked like! So imagine my surprise when I walked past this corner that I walk down every week and finally seeing the clock in somewhat working order.  Like I said, you never know what you'll find even when you pass by the same things week after week. 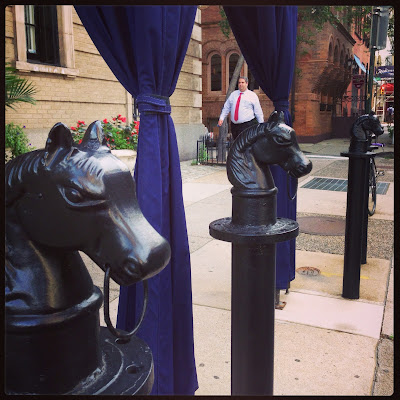 I could do, and probably have enough photos, of horse details from all around the city.  I'm not positive if these and ones like them, are original horse tying stations, but given the fact that so many old buildings exist in Philadelphia, I wouldn't be surprised that these are the real deal.  Maybe replacements, but I'm betting on the ponies that in this spot there were always horse poles for tying up one's horse.  That's the beauty of taking a closer look - you'll find all sorts of cool and beautiful things.
Email Post
Labels: architeture Philadelphia PhiladelphiaSights photos RittenhouseSquare StreetArt