We've spent a week out in the South West - in Pueblo, Colorado.  I've been here twice before and each visit always reveals some new local food that you just can't find back east.  This trip has not disappointed me. Nor has it been good for my waistline and cholesterol.  I've given myself total abandon to eat as badly as I want, for tomorrow I shall get back on track and start Weight Watchers again.  But I'm not here to talk about sensible, healthy eating, I'm here to write about some of the best burritos, green chilies and sopapillas I've ever had.  I'm here to share in the food finds of Pueblo, Colorado. 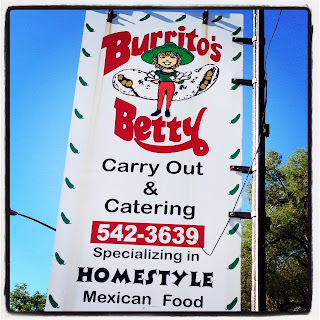 We hit up Burrito's Betty for our first breakfast.  $3.50 gets you a huge-ass burrito bursting out of its flour tortilla case, filled with eggs, meat, potatoes and the most delectable green chile sauce.  For those of you like me, unfamiliar with South Eastern Colorado's version of a Chile sauce, Green Chile Sauce is a sort of gravy, made with browned pork shoulder, a bit of onion and garlic, roasted Anaheim or Poblano or the Pueblo Chile, some diced chopped tomatoes, water, cumin and either flour or cornstarch as a thickener.  It's not very spicy although some restaurants can make on the zestier side.


Burrito's Betty is an old place, serving up inexpensive and authentic Pueblo style Mexican burritos.  I've eaten them on previous visits, but my Aunt had purchased them and brought them home to us. This visit was my first time at the actual location.  From what I've been told, the spot was once a gas station.  The restaurant, a total take-away spot, is cuter in person and tiny inside!  The service is quick. By the time you make up your mind, put in your order and pay, your food is ready. 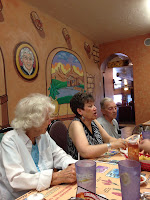 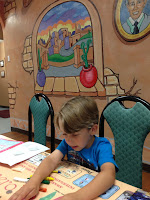 We had two meals out at authentic and local restaurants - one in Pueblo called Romero's.  Their claim to fame, besides their good simple food, is that President Obama visited during his campaign. The restaurant is nondescript place outside seemingly way out in the middle of no-where, off the highway along the side of a road.  Inside it was colorful and spacious.  The tables were covered in ads for local businesses, the kind of ads you find on place mats in a diner.  Most were pretty ubiquitous.  One, for Frank's Meat Market, truly stood out, as seen below! 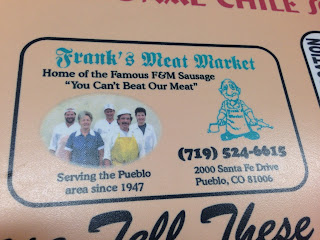 Our meal at Romero's was very good.  Inexpensive, quick and filling.  I had tamales filled with chorizo and served with rice, refried beans, smothered in green and red chile sauce.  It was HOT. Fiery HOT.  My ears and face turned bright red.  It didn't stop me from mopping up my plate with the flour tortilla though. 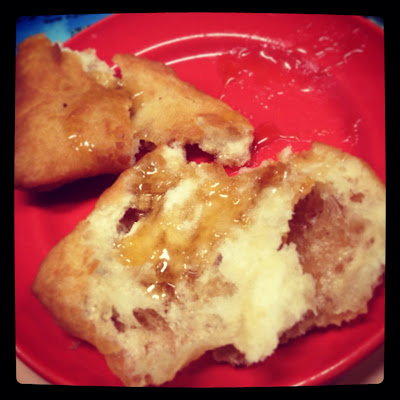 The best part of the meal was dessert.  I can honestly say I've never had a more fattening, delicious, heart stopping dessert until now.  Real, authentic sopapillas.  With as much honey as you want.  Hot and kinda greasy, I felt like I was eating like I did ( and I was) before Weight Watchers.  And now that I have eaten so badly, I really ought to start up on Weight Watchers again.  But these were so good! Fry Bread. Better than Funnel Cake.  Sort of like any culture's version of fried dough served with a side of something sweet.  We had another version of these in Santa Fe at a fancier restaurant called La Choza, but they weren't nearly as good.  It must have been the oil and that they were served to us hot out of the fryer. I don't even want to think the kind of oil they may have been fried…Thank goodness we don't live out there - I'd quickly be over 200 pounds again! 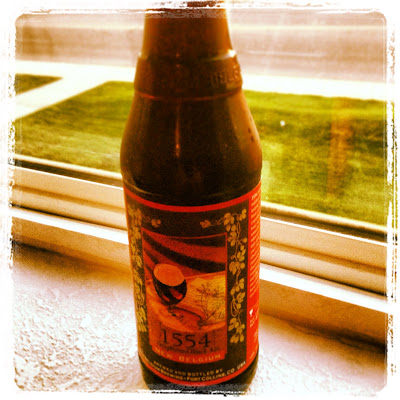 As much as I love beer, I didn't drink nearly as much as I wanted.  I had one or two Fat Tire Ales by New Belgium Brewers.  We found this 1554 Porter.  I only drank two of the six we bought.  I think I was too full from all the fried food! 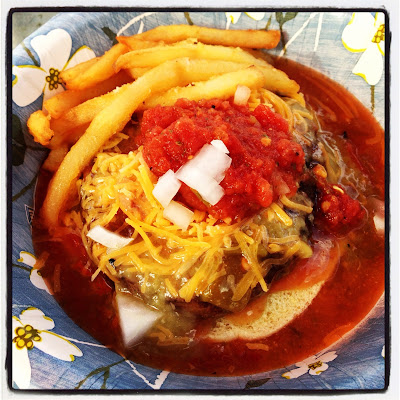 The food find of the week was a Pueblo "Slopper", a very unusual and surprisingly tasty hamburger combination of: a hamburger bun, a burger, topped with green chile sauce, cheese and french fries.  Another heart-attack on a plate meal.  I added some extra onions and salsa for a bit more kick. And if there hadn't been so many other good things to eat, I may have had a second helping of these.  Like I said, I ate like it was 2007 - when I was eating without thinking.  Our family told us about the "Slopper" and we saw a few road-side signs at restaurants advertising them.  It's one of those "you have to see it and eat it to believe how good it is" meals.

I'm hoping I can make a version of the Pueblo Chile Sauce soon, and I'll blog the results.  In the meantime, I have to get back to eating sensibly.  As much as I love the food in Pueblo and the South West, they sure don't know much about fresh vegetables and fruit!