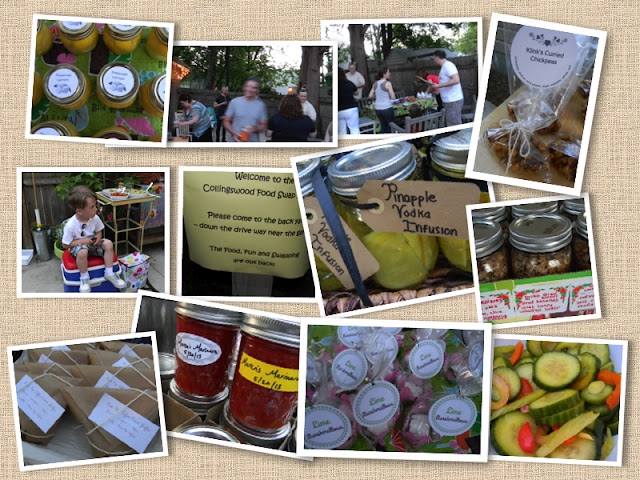 I held a Food Swap Event at my house this past week, having been inspired by the one I attended in April at The Reading Terminal Market (see my post about that event here!) I was so jazzed about the foodstuffs I saw and swapped I couldn't wait to go to another event.  I talked about the event with a lot of people and every time I mentioned it, people were as intrigued as I was about it.  I kept thinking I could do this - host a food swap, so when I asked two of my local Collingswood acquaintances if they'd be interested the response was very positive. I struck while the iron was hot - organizing the event in a matter of weeks so that I could keep the interest in the event blooming.  It worked - I got a great response from the Facebook postings and group invitations I created. 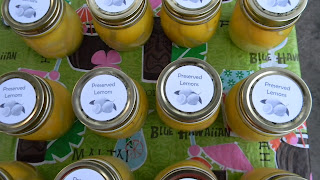 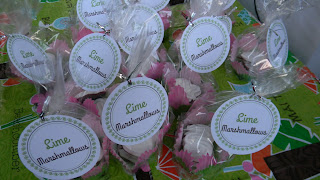 People came from mostly from the immediate area of Collingswood.  We did have some visitors from the next town over, Westmont.  Our friend, Maren, came down from where she lives in NJ - which is about a half hour away.  The guests who surprised me the most were the women I met at the Philly Food Swappers Event - Pam and Sam.  Sam found my blog post and commented on the blog.  I wrote back to her and told her I was holding one at my house in a few days. I asked her, via my comments section, if she would like to attend.  And she did! With only a few days notice, she and her best friend not only came to my party but they each brought delicious and beautifully packaged items - key lime meringue marshmallows and preserved lemons. 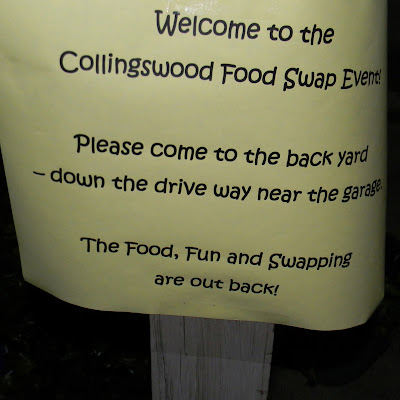 Signage is key! Not just for the food items, but for directions as well! We wanted the event - which was more like a garden party to be held in our yard.  Liz and Nate drew arrows and signs in chalk on our driveway pointing people to our yard. 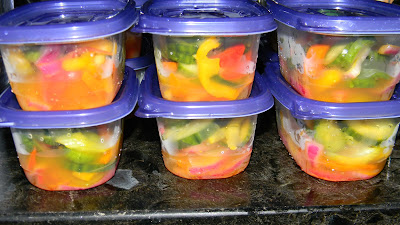 I made pickled vegetables - Cucumbers, Bell Peppers, Red Onions and Celery.  Quick Pickles - brined in apple cider vinegar. I wanted to do something quick, inexpensive, tasty without having to chop, can and cook for hours on end.  These came out really well.  The recipe is one of my modified pickle recipes that I tweaked/stole a few years ago from a Martha Stewart idea. 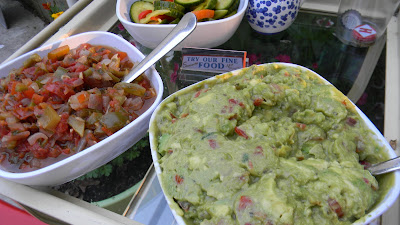 I set out some snacks for people to nosh on - my summer salsa and a guacamole. 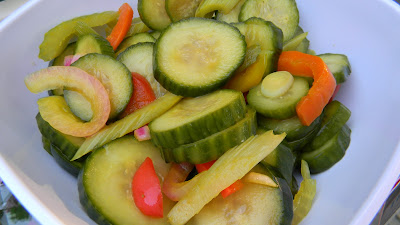 The Pickles! They are tangy, spicy and sweet. 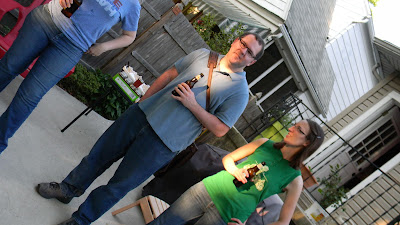 We had a great crowd of people from the area.  I met a few new folks from Collingswood too - other friends invited people they knew.  Pictured here are my neighbors, Dave and his wife, Susannah.  I met them last year at our Open House Tour - Dave was the volunteer stationed at my house for the day.  Susannah and I "met" via Facebook.  We have a mutual friend who introduced us.  Turns out we live a block apart - though we never see each other! 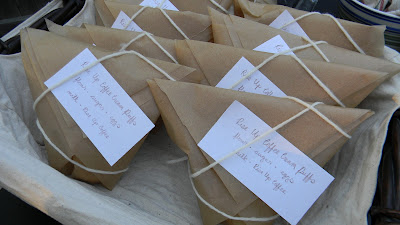 Susannah made these awesome cream puffs - filled with a cream lightly flavored with a coffee she bought from a small batch coffee company in Maryland.  Her pate a choux were delicious and her packaging was very impressive as well! 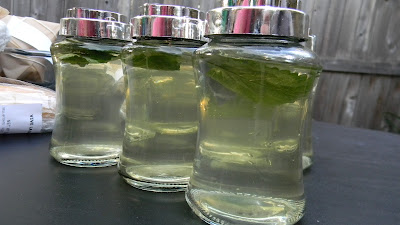 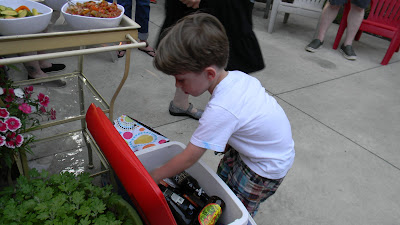 Nate played "Beer-tender" all night - he's the perfect host.  As soon as someone came into the yard, he went to the cooler and offered a beer, whether they wanted it or not! 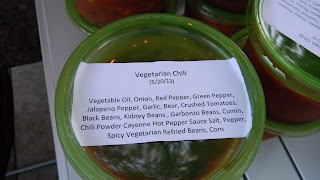 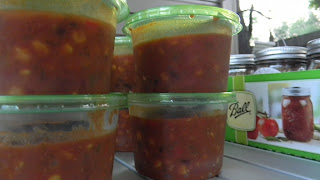 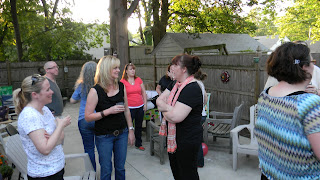 We socialized for about an hour before the swap started.  Pictured here are Kris and Jodie, (along with my friend Donna) the women I met a few weeks ago when I catered the Mexican-inspired dinner party for Jodie and her husband, Jay, and their friends.  Kris lives down my end of Collingswood. They had heard about my food swap event on Facebook and then I talked about it with them at the dinner party. Their offerings were very good too.  Kris made gazpacho (YUMMY!) and Jodie made Chili - which I scarfed down for my lunch the next day! 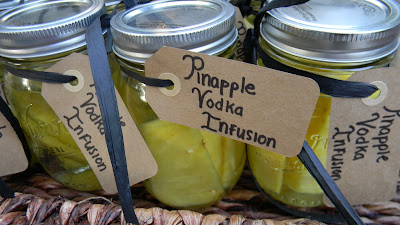 One of my favorite offerings of the night - pineapple infused vodka!  I met 3 or 4 new people at the swap - these were brought by new comers, Lauri and Ferd.  They also brought a very delicious and STRONG Vodka Sangria PUNCH! I drank two small cups and I was beyond tipsy! Gotta love the boozy offerings! 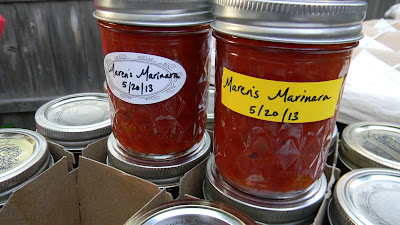 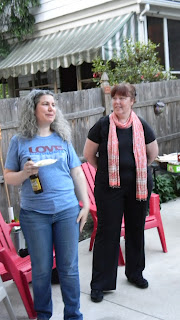 Our friend, Maren, came to the party too - she lives in New Jersey, but not in Collingswood.  I opened the event to our friends who I thought might be interested in this sort of party.  She's the perfect guest - great company, interesting to talk to, and highly engaging.  I should start a career for her renting her out as a party mixer and mingler!  She made a marinara sauce which could and should be sold in supermarkets! Outstanding! 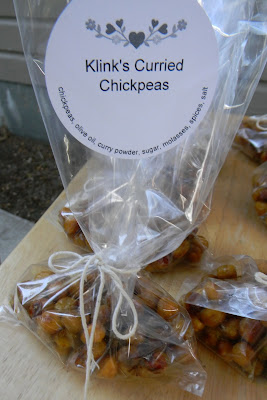 Highly addictive curried chickpeas by friend and neighbor, Laura.  I can see these would be tasty little morsels that one could put out for a cocktail party. 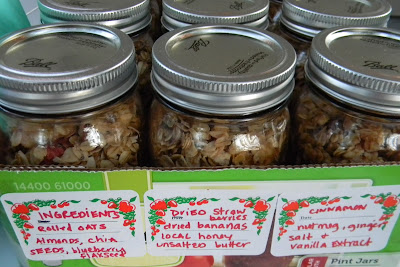 Another new friend and Facebook acquaintance, JamieLynn, brought her granola.  Our jar barely lasted to the next morning. 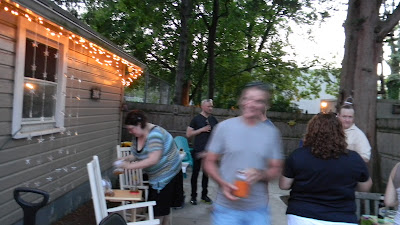 Everyone had a great time - as evidenced by all the positive postings on Facebook after the party.  I was so impressed by the food choices and the creative packaging.  I couldn't believe the response and turn out - especially since I put it together in about 3 weeks time.  I'll  hold another event again - but in all likelihood, I won't be able to pull one together until September.  I'm hoping other people will be inspired enough to host one of their own food swaps and that I'll be a guest to the next one soon! The idea is definitely picking up steam.

Items we swapped - though this list is incomplete due to memory loss!