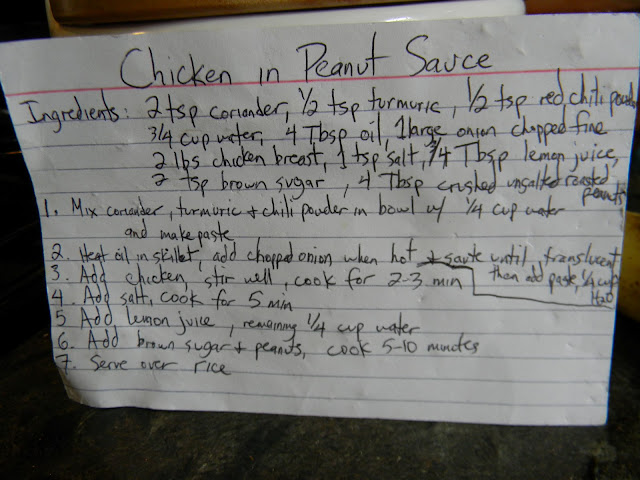 These findings are over a year old - I've had this post in my "draft" post folder for almost a year now, waiting to find the right moment to post it.  I thought I'd make the recipe for the Chicken in Peanut Sauce and the blog about it.  Never happened.  I make a great peanut sauce and I just never seem to get around to blogging about my recipe.  Or I have and it's in my archives.  I'll put this one out there to you and hope that others will try this found recipe and let me know how it works.  Or perhaps you'll share one of your own peanut chicken recipes, or share some tips on where you find your favorite version at your local Asian restaurant.

I liked finding this card, as I love to collect recipes, old cook books, lists, notes and other ephemera related to food and drink.  I suspect the writer of this recipe wasn't the average Good House Keeping or Women's Home Daily Magazine reader - Coriander and Turmeric are more "exotic" spices/ingredients. Coriander is also known as Cilantro, though if the cilantro flowers and tuns to seed, the seeds are then the coriander.  Turmeric is the golden yellow color found in curries.  It has a bitter, sour, harsh flavor, though used in small quantities can lend a beautiful saffron-like colour to rice and recipes. My best guess on the origins of this recipe is that it came from a more up-scale magazine like Real Simple or Food and Wine.  Or from the Food Network.  Our world is a small global village these days. 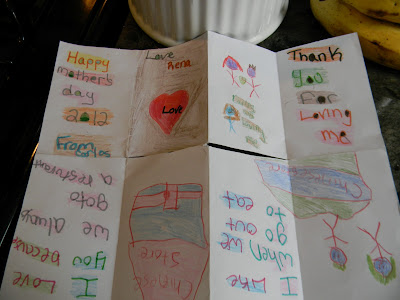 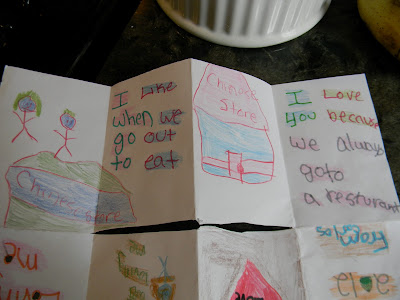 This card was found Mother's Day weekend, 2012.  The child that created it probably lost it on his way home from school.  It's a sweet card, meant to be folded and opened as a story card.  I think it spoke to me, now that I'm a parent and because the child wanted his mom to know that he enjoys going out to eat at a Chinese Restaurant!  Ties into my Peanut Chicken Recipe card that I found.