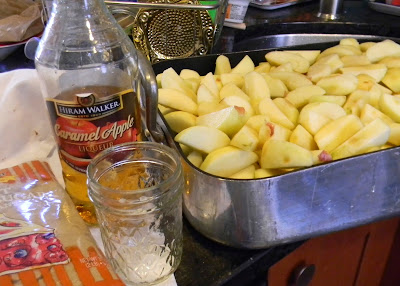 As a holiday gift to regular patrons of the Collingswood Farmers' Market, Schober Farms was giving away huge bags of apples to any and everyone who stopped by the Market on Saturday, December 22nd.  As we were planning to go out early to do our final Christmas grocery and gift shopping, we decided to take a wander over to the Patco parking lot to see what they were offering.  Imagine my surprise when I saw four or five kinds of apples for free, in huge 5 to 10 pound bags!  I knew immediately that I wanted to make applesauce and can it for future use.  I never did get around to making any this past fall, and it's one of my favorite things to put up for the winter season.  I took a bag of the Gala Apples and started planning my applesauce making. 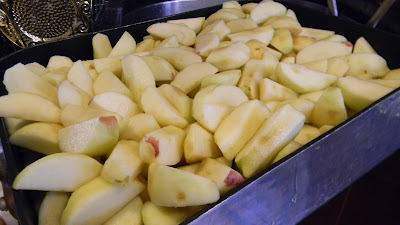 Instead of making applesauce the old-fashioned and laborious way that I usually do - chopping the apples and cooking them with skins and seeds and then hand-forcing the cooked puree through a fine mesh strainer or "China Cap" aka Chinoise, I did the sensible thing and peeled and seeded the apples before hand.  It's work either way but not nearly as difficult as having to press 5 pounds of apples through a hand strainer.  The food waste is the same - or so it seems.  Peel now or press later!


Knowing that I may lose a bit of flavor and colour by peeling away the skins, I thought about how I could best add depth of flavor to this small, artisan batch of applesauce.  15 years ago, I read a recipe in Martha Stewart LIVING Magazine that was a roasted apple and bourbon applesauce.  It was and still is an amazing recipe.  Down to the wine cellar I went, to see what boozy/bourbony/warm yummy spirits I could use.  At first I thought about using a dark rum, then my eyes spotted a bottle of Southern Comfort - too strong.  Then, there it was - a bottle of Caramel Apple Brandy.  PERFECT! 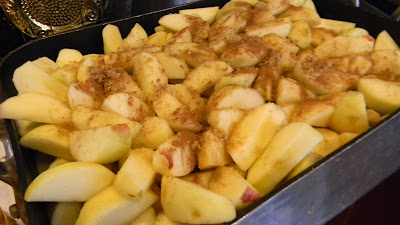 I peeled and seeded and sliced the apples.  Then I sprinkled about a 1/2 cup of light brown sugar over the apples, a pinch of salt and a generous dash of cinnamon.  Next, I splashed a generous shot of Hyram Walkers Caramel Apple Brandy over the whole roasting pan of apples - about 1/2 cup total of the brandy.  The oven was set and preheated to 425 degrees Fahrenheit. 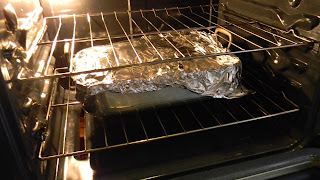 I used my largest roasting pan, and it was filled with the apples.  This was tightly covered with aluminum foil, and set into the oven to roast, covered for 45 minutes.  After I took the cover off, I stirred the apple mixture and roasted the apples for another 30 minutes, so that the apples could take on some colour and that apple juices would absorb back into the mixture, creating another layer of caramel flavor. 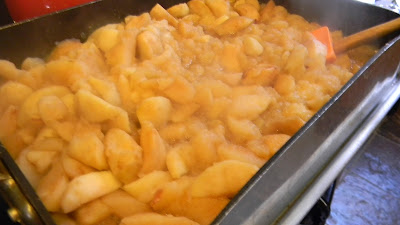 The apples that I chose cooked down perfectly, not quite to mush, but they didn't retain their shape or crispness, which was exactly what I wanted.  After the apples were cooked down, the juices evaporated  and the mixture smelled like apple pie, I further smashed it with an old-fashioned hand-held potato masher, just so the mixture would be slightly chunky.  I let the applesauce cool for about a half hour before I put it into a container to refrigerate.  The batch made a lot of apple sauce.  Too much for us to eat without it spoiling. 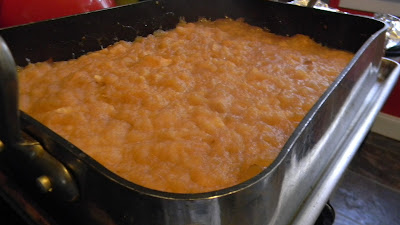 There was so much applesauce, I put up 7 jars of it so that we could enjoy and share this in the months ahead.  Canning applesauce is easy, it's the prep work and cooking it ahead of time that takes time.  Tonight I reheated the applesauce for 15 minutes, and while it was boiling and simmering, I prepared my jars and heated my water bath.  We ate a bit of the applesauce too - it's so sweet and delicious I want to make little hand pies with it.  I can think about my next recipe for that later now that I have 7 jars put up for the winter. I feel like a real Pioneer woman.  Just call me Ma Ingels!

UPDATE September 10, 2013:  I have a link to a pdf recipe file you can access for a concise recipe for this, along with canning instructions.  It also includes a recipe for peach salsa and quick pickles, tips for canning and all the instructions you need for canning.  This applesauce tastes like apple pie, without the fat and guilt!   https://dl.dropboxusercontent.com/u/105299578/Canning2013.pdf
Email Post
Labels: apples canning Collingswood cooking FarmersMarkets recipes