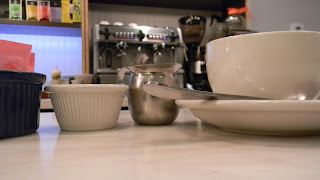 Back in October, which feels sooooo long ago, Nate and I visited with my good friend, Leanne of Tinsel and Tine - Reel and Dine food and film blog.  We went to Mag Pie Artisan pie shop located at 1622 South Street in Philadelphia.  Leanne and I hadn't seen each other in months, and we had both been eager to check out this new comer to the West Side of South Street's new Restaurant Renaissance.  In case you are new to my blog and don't know, I LOVE PIE.  It's in my top 5 favorite food groups, the foods for which I will crawl on hands and knees to have: Pie; Donuts; Hamburgers; Hot Dogs and Pizza.

Leanne and I both took a while to get our blog posts up about this fine shop.  You need to read her review of it.  She's an excellent writer and she has an interesting and unique point of view when it comes to food and film.  She's a far better reviewer than I am, with more discerning tastes and expectations.  I'm happy to get out, delighted if we can take Nate and have him sit still long enough for us to scarf down a meal! Leanne, she's the real deal writer!

Finding a good pie in Philadelphia is as difficult to locate as the proverbial needle in a haystack, until now.  Mag Pie Artisan has saved us from a pie wasteland.  I've been to the shop twice now, and over these 2 visits, I have tasted more than a fair sampling of their fine pies. On the first visit, with Leanne, we had 5 pies between the 2 of us and Nate.  Nate didn't eat much else other than whipped cream and ice cream, so it's not fair to say he helped us eat our way through Mag Pie's menu.  We took care of that all by ourselves.

I love the decor of the shop.  It's a smart, urban mix of country chic, crossed with some touches of industrial but warmed up by a hip city vibe.  Think pie safes with cool steel mesh, warm wood, metal stools at the counter as designed by Pottery Barn and Southern Living at Home.  It's comfortable and inviting w/out being hokey and false.


The menu changes seasonally, with several savory offerings and many sweet pies, tarts, and pie fries - which are the pie crust extras dusted with cinnamon sugar and served with sides of "dips".

On my first visit, Leanne and I "shared" the butternut squash with smoked Gouda and spinach pie and the black bean and chorizo pie with Fritos and Jalapenos.  OMG! Outrageously good.  The butternut was cut into thin layers.  The smoked Gouda blended magically with the spinach and squash, taming the sweet of the butternut but not overwhelming the pie with its decidedly strong taste.  The pie topping was a crispy, corn-flakey savory streusel.


The black bean pie, which I had again, on my second visit, is served in a blind-baked mini pie shell.  It's much like a chili pie combined with a Texas Frito Pie.  Topped with delicious and bad for your arteries Fritos, sour cream and jalapenos, it could be the new Philly Southwest twist on this Texas perennial dish.

During visit number 1, which was a quite, rainy Sunday late morning, early afternoon, we tried 3 of the sweet pies.  The butterscotch bourbon wins out as one of the best pies I've ever had.  Screw Momofuko's CRACK PIE and it's cult-like following and over-priced pie plate.  Mag Pie will see crack pie and match it bite for bite! Smooth. Rich. Sultry.  It's heaven.
The Buttery Caramel Apple Pie is a hearty heaping rectangle slice of pie.  Flaky but firm crust, buttery rich apples that retain their crunch but give way to hints of warm cinnamon and nutmeg sugars.  We had it served with a scoop of Basset's vanilla ice cream.  Pure Philadelphia indulgences. 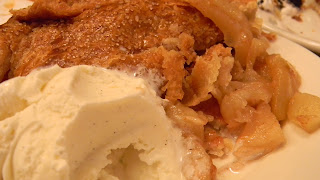 We also tried the chocolate peanut silk pie, which was good, but I'm not a huge fan of mousse or silk pies.  During my 2nd visit, with friend, Barbara from Zeroto60andBeyond blog, I had the black bean pie, and a slice of the pecan pie.  My second taste of the black bean pie was as good as my first.  As for the pecan pie, it was good, but not the best I've ever had.  I've had bad pecan pie - and man, when it's not made well, it's a goopy, gelatinous mess.  Mag Pie's Chocolate Cinnamon Coffee Pecan pie was missing the notes of chocolate, cinnamon and coffee.  Plus, I though the crust was too firm and not flaky enough.  It was the only miss of all the pies I've tasted so far.  I'll probably give it a try again though, it held inviting hints of what's to come when they find their stride here.
After 2 visits, I've more than just tasted 8 of their rotating pies.  I brought home a slice of Pumpkin Pie for Liz and we deemed it one of the best we've ever had.  It's not for the diet conscientious, and won't make my list of pies I'll be eating and or making on a regular basis.  Hell, I shouldn't be eating any pie on a regular basis.  It's bad enough I'm far from my ideal weight and shape of 3 years ago. It's a good thing I still have some will-power, tight fitting clothes that I don't want to replace, and a tight wallet! I'd be at Mag Pies more often than would be healthy for me! 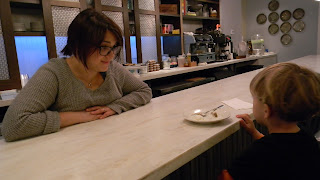 Another reason to return to this comfortable and inviting shop, the staff!  On both visits, we were served by Courtney.  She was so kind and attentive to us, as well as to my son, Nate.  He regaled her with his "stories" telling her all about his upcoming trip to The Please Touch Museum.  She stood and talked with him, never got upset with his running through the shop and even allowed him to climb across the entire counter of bar stools.  It was a good thing the shop wasn't crowded, I would have never been able to reign in Nate and keep him from causing controlled mayhem.  Aside from the excellent pies and coffee, their customer service was one of the best reason to come to this shop again and again. 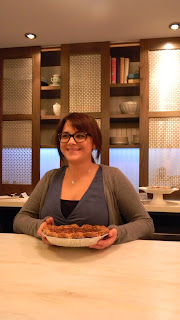 Go! Have lunch and coffee.  Order a whole pie for your next event.  Mag Pie Artisan Pie Shop feels comfortable and inviting, like a visit with your favorite, slightly exotic and artist Aunty Mame-type Aunt!  Always changing and always surprising. You won't be disappointed.
Email Post