During the week of Thanksgiving 2012, I had the opportunity to be on television, doing a segment on CBS 3's Talk Philly's afternoon program.  I was there to promote ExtraordinaryED, the education center in Collingswood where I teach.  I was the guest chef and my segment was all about "What to do with your Thanksgiving Leftovers." (the link to the video is here.) It was taped on Wednesday morning, the day before Thanksgiving.  The piece aired the day after, on Friday, at noon.  The whole segment took about 10 minutes to shoot, but it took me days and hours to prepare.  For real.  Days and hours!  I spent a lot of time preparing, researching and tweaking my recipes for the segment.  Then I had to do my shopping and cook almost an entire Thanksgiving feast (with a certain level of prepared food short-cuts) so that I could have enough left-overs to use for the tv spot.
People asked me if I was nervous about being on television.  I wasn't in the least bit.  There were several reasons for this. Primarily because  I have "performed on-stage" for several years when I was a cooking class instructor at Williams-Sonoma. I knew what I needed to do for the pre-show work.  It's all about being prepared, sort of scripting yourself so you can get through the run though well-rehearsed.  I needed to have one finished dish for display and/or tasting and other food items needed to be pre-set and prepped for the demonstration. Besides being so well-prepared, I knew that the segment was being prerecorded.  Any glitches I made could and would be fixed.  As it turned out, we had to stop mid-take and start again; I flubbed one of my "lines", but stumbling over what I was trying to say on camera.

I have a pretty good attitude about myself and the way I look.  There's not much I can do about changing these features.  The one great lesson I learned from HOW NOT TO BE LIKE MY MOTHER is that I have accepted myself for who and how I am.  I like myself, I'm mostly happy with my physical self, though I'd love to lose the 20 pounds or so I've gained in the past few years. When I knew I was going to be on television, I thought about what I should wear and what chef-like clothes would look best on camera.  Then I fussed with my hair and put on enough make-up to make me look good but natural.  My food looked good and the pater with Ukie Washington was far better than I could have wished or imagined.  The rest was up to the cameraman and the producers!
I'm not sure why it's taken me so long to write more than a passing comment about the piece.  It was one of the most exciting things I've done all year.  The exposure was fabulous and the ego boost wasn't too bad either!  I guess I thought, Oh, I'll do a post about the spot tomorrow, and then other posts took precedence and time just got away from me.  Blogging is a funny past-time.  We can write about what inspires us or excites us.  We can have blog posts set for future publishing, or for when an idea is fully germinated.  And then there are blogs posts that take top priority, needing to be written in the moment before the relevance is lost.   This post, well, it just didn't fit any of my criteria.  I just wanted to chronicle it before the end of the year.  Guess what? I've got 3 days left to tell my story!

When I arrived at the studio, I had a car filled with bins and coolers of food and dishes.  As I said, I'm used to the preparation for a demonstration.  I'd rather be overly prepared and have too much stuff than be missing something crucial to the cooking lesson.  For my tv spot, I was supposed to "make" two recipes and have four prepared dishes, along with the prep for each recipe and a few turkey pieces for good measure.

I demonstrated my turkey enchiladas with tomato and pumpkin sauce; whole wheat pancakes with sweet potato puree and cranberry sauce maple syrup.  Ukie loved those!  For display, I also had a low-fat curried turkey salad and a wild-rice blend salad with a cider Dijon vinaigrette.  It was a lot of food and a lot of cooking!
As I said, I had enough food cooked for a real Turkey Day Feast.  I cooked enough food that there was enough for our own dinners on Monday and Tuesday nights.  I shopped on Friday night, brined the turkey on Sunday; cooked some things on Monday; I finished everything and pre-set my ingredients on Tuesday night so I would be ready on Wednesday morning.  By the time I got to the studio (an hour early!) I was more than ready for the taping.   My set up in the studio took about 45 minutes more, unloading my food and props, setting the table, fussing with the finished dishes to make them look camera ready!  The above photo is my curried turkey salad with apples and craisins.  It wasn't featured as a tv discussed recipe, and I think it may have been one recipe that wasn't posted on CBS 3's website.   I posted about it in November.  You can see that recipe here.

All in all, it was a fantastic experience.  I have a video showcase of myself in action.  I have a bigger repertoire of recipes, more of which will make their way to the blog in the coming month.  The television appearance didn't do much to boost sales for my cooking classes at ExtraordinaryED, but I'm hoping that this will eventually go towards moving my teaching/writing/and food styling skills into a larger venue.  We'll see.  In the meantime, I'm being billed by ExtraordinaryED as TV Chef Denine Gorniak.  A title I sort of like!  I may not have earned it, yet, but it's not a lie.  Stay tuned for my next installment! 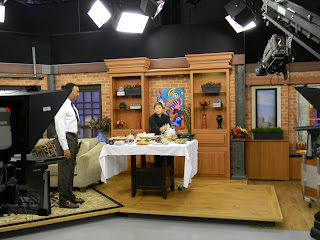