I take photos nearly every day.  On my wanders around Rittenhouse Square, on my way home from work and of course, as Liz calls it, my oBLOGatory Food Photos.  Friday, October 26, was Philly Photo Day, sponsored by Phila Photo Arts - a non-profit group dedicated to bringing photography to everyone - especially to people who will not be likely to have access to cameras, photo studios or photography studies - the poor and disenfranchised.  I've participated in the Philly Photo Day last year as well as in ADAY.ORG's photo day back in May.  While I only submitted one photo, I spent my time outside taking photos everywhere I went.  These are almost all of my photos taken on Friday, October 26, 2012, save for a few that were either blurry or just not as interesting as these.

It's clear after just a few photos, what my photographic vision leans towards: bicycles, street art and architectural details.  I don't intentionally, or consciously set out to take photos only of these things, I just find them the most interesting.  After a few shots, I realized I had a theme.  It's hard to change what you like.  What can I say, I'm The Bicycle-Chef after all!


With bicycles in the foreground and I was mostly interested in the building and the street art that's been adorned on the boarded up facade.

I liked the way the tools and digging implements were so casually, yet artfully laid out on the sidewalk.  After the photo was snapped, I then noticed the bicycle lock-up pole.  Another bike sneaks into the photo!
It may be cliched, taking a photo of a gritty alley way, with the steam pouring out of a pipe, but it speaks to me about the other side of life that exists next to us at all times.
I like the angles, the round signs, the tree that looks like it's in bloom instead of getting ready to go dormant.  There's a bit of graffiti on the Kiosk sign and I love the coffee cup angle on top of the meter machine.

The first of my "shooting from the hip" photos. Sneaking a photo of a girl.
Left of the Next to Normal photo - another shot from my hip photo.
I shot this photo literally from my hip.  I had seen photos taken by someone I follow on Flickr, and her photos were taken without looking.  I liked the idea and wanted to try it.  It works well for taking those sly photos of people when you don't want them to know you're taking their photo.
I wanted to shoot most of the day in black and white.  Several photos didn't even need my switching to the black and white mode, the light was so grey and dreary naturally.  Except for these photo - where the green grass was so shockingly green that I had to switch back to full colour. No touch up needed here, it was like seeing the Chicago River on St. Patrick's Day - vibrant technicolour green.
I didn't see the family that owned this stroller. It was in the middle of the lawn, set by itself.


My walkabout also included a brief stop to Metropolitan Bakery for a loaf of bread.  The goodies behind the counter were deserving of a photo, even if I couldn't buy or eat them, I could admire them. This store is a little touch of Paris in Philadelphia.

I love old neon signs and I especially love old shoe repair signs.  They are so old fashioned and simple.

I've said it before about building details and sprinkler pipes - I find them interesting.  Some are sort of artistic or look like faces or people.  They are there, in plain sight but we never notice them. This one reminded me of a traffic light or stop sign.  I liked that it looks good in black and white as well as in colour.
I've seen this graffiti artist's work around before, usually on stickers or tagged onto signs and buildings.  Clever (yet destructive) use of tagging onto a metal surface by "etching" his design on the corrugated metal.
City Streets with their painted lines in crosswalks make for fun contrast studies.  Of course, the white lines also remind me of piano keys and of the Beatles Abbey Road album. 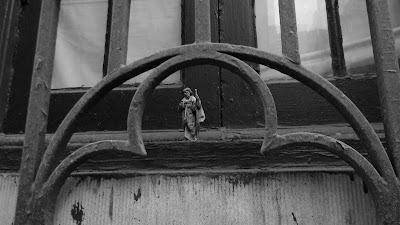 Clearly, this Saint has been here for a long time, guarding and protecting this building.  I pass by this building several times a week and I'm not positive I've noticed the statue before today. 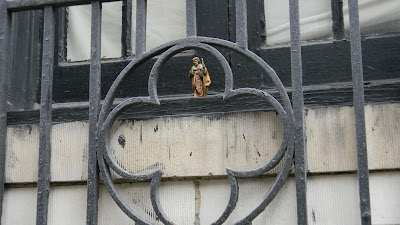 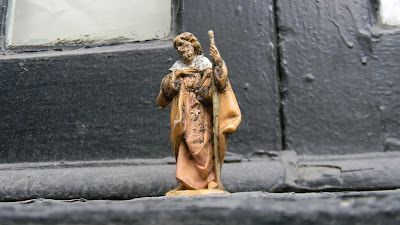 I ended my day like most, taking the High Speedline home to Collingwood.  As I did on my photo walkabout back in May, I took pictures down in the PATCO Station.  Trains are great subject matter.  The lines, the signage, machines, etc, all make for great photo opportunities.  You can make them seem industrial, romantic, gritty and urban, all at once.

Photos I've seen of New York's transportation hubs, all closed due to Hurricane/Storm Sandy, this past week made for some eerie images.  Images of empty buildings that are normally bustling with commerce and activity remind me of scenes out of apocalyptic movies.  These became a little too real this past week with the storms, flooding and power outages all over New Jersey and New York.
Email Post
Labels: FoundObjects PhiladelphiaSights photos