Carrot and Sweet Potato Soup with Thyme and Dill 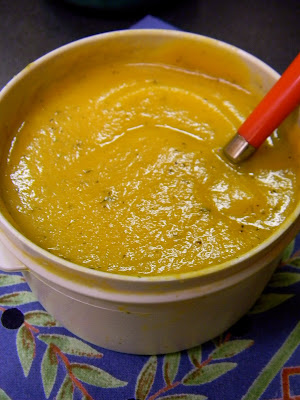 It's soup season.  And the season for foods in shades of orange and pumpkin.  This past Sunday night I cooked my usual weekly fair of vegetables, starches and proteins, and realized as I was preparing a lot of things that were packed full of carotene.  Carrots, sweet potatoes, beets. I also made pan braised salmon in a soy sauce glaze.  We'll eat well and keep our eyes healthy at the same time, without, hopefully getting the Susan Dey-Glow from eating too many carrots.


Among the many dishes I cooked, I also managed to make a pot of carrot, sweet potato soup with thyme and dill.  It's completely vegan, souper super low-fat and deliciously good for you.  I've written before that I once cooked/worked for a woman infamously frugal.  The restaurant was well-known for its soups and most of them were vegetarian and/or vegan.  I learned to make vegetarian soups with their own stock in one pot in one pass.  We didn't have time or money to make a vegetable stock base; you did it all at once while the soup cooked.  It was one of many great tricks I learned to appreciate later in my life, years after I no longer worked at her store.  The trick to making a vegetable soup using only water as the base is to add in extra aromatics and spices along the cooking process.  To make vegan soups taste and seem "creamy" you add in an Idaho or Russet potato.

As much as I love to make soup, because it feels like you're making great food from nearly nothing, I'm not a soup-eating fan.  I often want a fuller meal and soup doesn't quite fill me.  However, when you pair a hot steaming bowl of aromatic magic with some great bread and a bit of cheese, then I'm satisfied.  I'll concede to vegan soup but not to a full vegan lifestyle.  Sorry friends, I can only go healthy so far in my eatie's life!

The soup is pureed, so in addition to a medium or large stock pot, you'll need to have a blender, food processor or immersion blender in order to finish the soup.  I used olive oil, it has more flavor than canola or vegetable oils.  Whenever I use salt and pepper, they are kosher salt and freshly ground pepper.  Both have fresher flavors.

Carrot and Sweet Potato Soup with Thyme and Dill Ingredients: 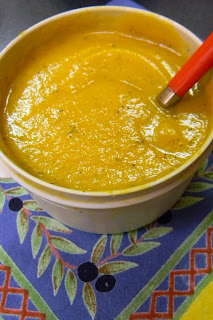