We threw a Halloween-themed birthday party for our son, Nate. He turned 3 last week and his party was the Saturday after his birthday.  Close enough to Halloween to warrant a full-on kids' costume party, complete with all the decorations and catering that we could muster together in a few days.  It wasn't difficult to pull this party together, we have more than enough decorations and Halloween platters, bowls and urns.  We I had to stop taking stuff out of my storage boxes and bins as I have so much stuff from over the years of parties and events that we've thrown or catered.  We also had to stop finding clever ideas for food decorations.  Between what Liz and Susan Hill found on the Internet, we were over-whelmed with great ideas and recipes. 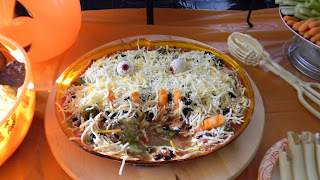 Nothing was difficult and we learned to step away from the Martha Stewart Halloween books and magazines that I've saved over the years.  Short of going full-out Pillsbury Best's Halloween Idea Book and tearing pages out of Crazy-Drunk Sandra Lee's Semi-Half-assed-Homemade books, we channeled the ideas that we knew would work best for us.  And then I threw in a few dashes of my own crazy and tried to make vegetable critters and a 7-layer taco monster dip.  I used a layer of guacamole, salsa, sour cream, black beans, olives, pickled jalapenos and a low-fat shredded Mexican cheese blend.  For the eyes, I had 2 clean rubber balls with eyes imprinted on them and for the fingers I took baby carrots and cut out notches for the nails and knuckles. Easy!  Serve with Tortilla Chips or if you're really ambitious, cut flour tortillas into Halloween Shapes using cookie cutters, then brush oil onto them, sprinkle with Chili Powder/Mexican Seasoning and bake for 10 minutes or until crispy. 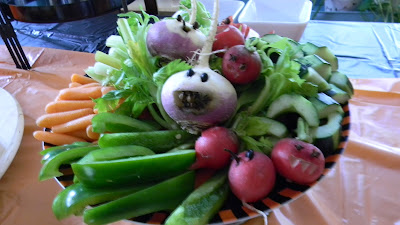 There aren't any real recipes here, more like ideas and suggestions that we borrowed and re-created.
A vegetable platter with turnip and radish creatures.  I forgot to make my scallion ghosts.  I should have made them at the same time when I made the turnip and radish.  Oh well... My vegetable dip was low-fat sour cream with dried bell pepper flakes, Italian Seasoning, celery seed, toasted onion flakes, a pinch of salt, freshly ground black pepper and a squeeze of fresh lemon juice.  Make it the night before so that all the dried seasonings can blend together, absorb into the liquid and reconstitute.  Stir well and serve with the veggie platter.

We decided to serve hot dogs and home-made (but made simply) macaroni and cheese.  Not satisfied with serving hot dogs in buns, we made one package of Mummy-Dogs, using Pillsbury Bread Sticks, cut into strips and wrapped around the hot dogs.  You bake them for about 17 minutes.  Each bread stick is cut into 4 thin strips. 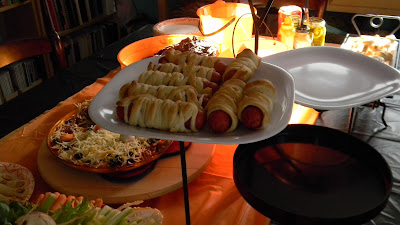 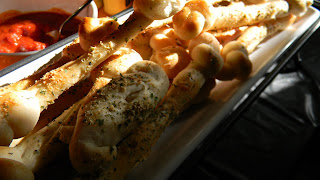 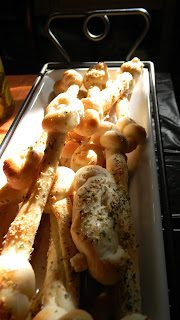 Using the same bread stick dough, we also made bread bones.  These were even easier to make. Years ago, we made home-made pizza dough, which we then shaped, boiled, brushed with an egg wash, dipped herbs onto them and then baked.  TOO MANY STEPS!  All these required was rolling out the dough to a long strand and tying the ends into knots.  Brushed with egg whites and sprinkled Italian Seasonings and Parmesan Cheese. Bake for 15 minutes or until slightly golden.  Serve with a bowl of dipping blood, um I mean, pizza sauce!

Halloween Mac & Cheese: I found Halloween-shaped pasta at Wegmans. I wish I had purchased 2 bags; one wasn't quite enough.  So I added a half-pound of small shaped pasta to it to make a bigger batch to fill this half-pan. I made a low-fat cheese sauce, using skim milk, light butter and whole wheat flour for the bechamel/white sauce.  Seasoned it with nutmeg, dry mustard powder, a dash of cayenne pepper, a pinch of salt and some freshly ground black pepper.  For the cheeses, I used a combination of low-fat Velveeta (yes, I did! and it melts great and kids love it!), low-fat shredded cheddar cheeses and a cup of pured butternut squash. This is a true riff on the semi-homemade/Deceptively Delicious recipes that I have grown to love.  For the topping, I used wholewheat bread crumbs, some dried parsley and Parmesan cheese.  Sprinkle this over the top, drizzle with oil or dab with some butter; bake to heat through and brown the top.

Severed Fingers: We used mozzarella cheese sticks cut into pieces, which we dabbed with cream cheese and stuck a half an almond onto the tip to look like fingernails.

Halloween Pretzels: For the Pretzel Rods, we melted white and dark chocolate and into which we dipped the rods and the sprinkled with Halloween Candy Sprinkles.  You have to cool and refrigerate them so they set.

Cookie Ghosts: The Nutter Butter Cookies were trickier to do at first but then we figured out how to make these. Basically, melt white chocolate and then either dip them in the chocolate (which is messy!) or just coat one side of the cookie so that it's "enrobed" with the white chocolate.  Then add some sprinkles, jimmies or tiny candy pieces for the eyes and mouth.  Set in a cool place or refrigerate until the chocolate hardens. 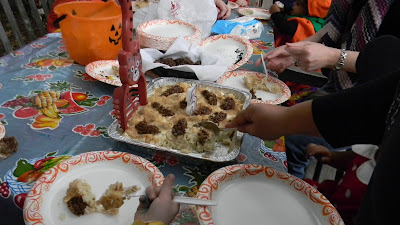 The  piece de Resistance was the Kitty Litter Box Birthday Cake that our good friend, "Mommom" Susan Hill made.  She had sent me a web page link to this cake idea and I loved it immediately, gross as it looks.  Liz wasn't too keen on the idea but I asked Susan to go ahead and make it.  One is supposed to use a new, clean, small cat box, but that might take the idea too far over the edge.  Susan used a lasagna pan and bought a new, fun, cat scoop.  The cake is baked, then crumbled and re-assembled with pudding and yogurt.  The top is dusted with cinnamon.  The cat, ahem, leavings or deposits, oh, heck, I'll say it, TURDS/POOP/SH!T can be melted tootsie rolls or, as Susan made them, shredded apples, cocoa powder, maybe some powdered sugar, and oats.  Looks rather authentic but tasted, as Nate says, Really Great! 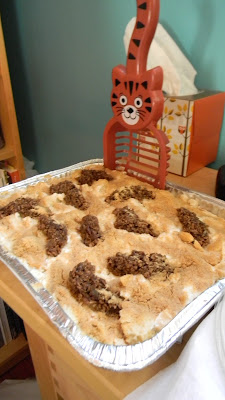 Naturally, there are nearly 100 other photos from the party, including a video of everyone singing Happy Birthday along with the kids cracking up over the "cat poop".  Nate's watch himself in the video nearly 100 times already!  I'm sure I'll post the event at his blog, NibbletNews.blogspot.com.
Thought the food and how-to recipes would be more appropriate here first.  Wonder what we'll do to top this party next year?