A video and photo montage of our 1st Fourth of July Parade in Collingswood.
Consider it an apetizer to the meal of the post! 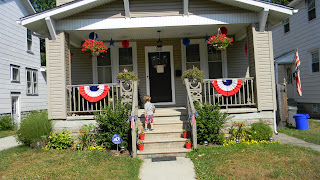 We had a memorable 4th of July here in Collingswood, New Jersey.  I decorated the outside of the house for the Proud Neighbors of Collingswood house contest...we didn't win but it was fun to get new decorations for our the house.  A few days later, I learned, from a friend, that as a new-comer to town, I am hardly eligible to win a house decorating contest.   The house decorating contest as well as the bike and wagon parade are a big, Big, BIG Deal in this town.  My friend, Morgan, said that I need to bring all of my South Philly best and gaudiest to my decorating finesse if I want to even make a dent in this social scene! I say, give me a few more years, and I'll be a big somebody here in this town! 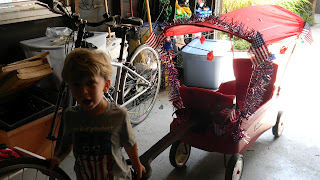 We also took Nate to the Annual Collingswood Children's Bike and Wagon Parade at Knight Park. I decorated Nate's wagon, with what I thought were  awesome decorations to the hilt.  Little did I know that this parade is a huge deal as well in Collingswood!  I hardly used enough decorations.  I used what I had on hand, some stray shiny red, white and blue garland, a few sets of lights, one that was a set of battery operated stars, another a set of Fourth of July Star Lights that should be plugged into an outlet. work.  I used lots of flags, stickers, a pin wheel and bows.  Next year I'll have to buy some serious decorations and work in a theme of flashing lights and whizzing thingamajigs to even get an honorable mention in the parade.  We didn't even warrant a photo opportunity other than my own journalistic and obsessive photo shooting! 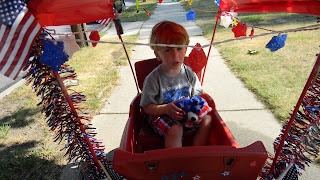 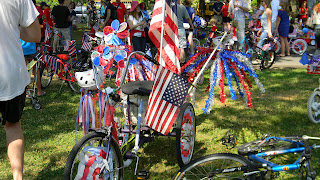 Our wagon looked great but didn't compare to the elaborate bunting, crepe paper, wings, head dresses and other independence day paraphernalia that families and kids of all ages used to decorate their cozy coupes, radio flyer wagons, trikes and bikes.  There were kids in full Uncle Sam and Statue of Liberty costumes! One little boy no bigger than a minute was sporting an Uncle Sam beard and hat over his bike helmet!  Another girl, a pre-teen, had a 10 foot wingspan, sparkling wig, and flag trailing behind her very decorated adult tricycle.

We hardly stood out at all in our modestly turned out radio flyer wagon with it's canopy.  It was great fun to participate, marching around the park and watching all the excitement and activities.  Participating in this event, decorating his wagon, dressing up in our red, white and blue best,  I felt as though I was being the mother to Nate that I wished I had had growing up.  It was bittersweet and wonderful all at the same time.  Nate barely understood what was going on, though he was happy to be in his wagon, happy to be around so many kids and of course, delighted to get ice cream after the parade! 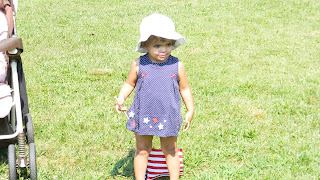 After the morning event, we came home to cool off, eat lunch, and nap.  Later in the day we had new friends from the neighborhood come over for a play date and for a low-key barbecue.  Nate is enamored of this new little girl we met, Bella.  He woke from his nap calling for her and wouldn't stop asking for her!  Of course, in typical boy and 2 3/4 year old fashion, once she came over, he didn't want her to play with any of his toys! Ah, the simplicities of life. 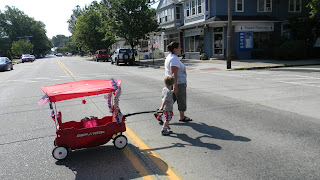 It was lovely to meet a new  friend with a child close to Nate's age, especially since the new friend, Donna, is a single and non-traditional parent raising a daughter on her own.  Inasmuch as we have all sorts of friends, couples, gay, straight, married, whatever, there is something to being friends with people who "get" us and "it" without having to explain or justify who we are and what we are doing.  I now have a whole new set of knowledge and respect for so many of my friends who have kids.  I now UNDERSTAND why there were years when we didn't talk, because raising kids is a hard job, even if your child (or children) are easy going.  When you don't have kids, it's hard to understand the exhaustion, the stress, the blessing, the trials and all of the joys that you experience on a daily and weekly basis. When I'm around other parents, I don't feel like having to explain or apologize for Nate's temper tantrums or his histrionics.  While I worry constantly about all of his behaviors, when we are around each other, we all see that our kids, no matter the age, all act out and behave in similar fashion. How do you tell a 40 year old to move their tuccus off the couch because it's your son's favorite spot and he's crying buckets because you don't have the sense of said two-year old to haul your keister to another seat?!  It's a sweet relief to be around other people with kids.  I don't want to lose my friends who don't have kids, or who's kids are grown up, but for the moment, I am enjoying the sisters and brothers in arms camaraderie that we share. 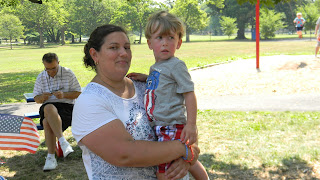 As for being the parent to my son that I wish I had had, well, that's one of the gifts we can give to ourselves, to make it right for ourselves.  I laughingly said that I sort of understood Michael Jackson, who claimed he never had a childhood, so he was having a childhood constantly as an adult.  In one sense, many of us who had traumatic childhoods do need to reclaim it in our adulthood.  On another hand, there can be a point where you aren't having an adulthood either, by trying to relive and find the thing you miss, lost or want.  I enjoy doing for Nate what I wanted to have done for me but I also want to do for Nate what he needs and wants.  Real fulfilment of your loved one's life is much more important and freeing than trying to reclaim one's lost youth.  That's my true independence for a modern life. 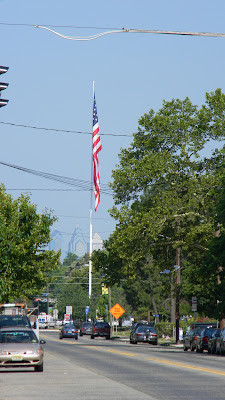