How I Learned to Drive

I've been waiting to say something about this big news (to me anyway), I had a piece of my writing "published" in REAL SIMPLE Magazine!  It's been difficult to keep mum on the subject, not tweeting, Facebooking or blogging about it until the magazine was published and on the newsstand.  Given my propensity for talking and sharing this was a hard secret to keep!
REAL SIMPLE Magazine asks a question every month of it's readers and the best responses get published a few months later; the best response is the big featured reader response.  We had the May or June issue and the question posed for a future issue was,

"What risk have you taken that you are glad you took?"

I immediately thought about how I learned to drive so late in life.  I kept on thinking about this all night and when I woke up the next day, I just knew I had to enter my essay.  I had a premonition and I knew that I needed to follow through on my hunch.  Sure enough, about two weeks later I heard from one of the Editors at REAL SIMPLE, stating that she really liked my essay and wanted to publish it in the August issue.  Colour me happy but not too surprised!  This bit of good news came on the tale of my meeting with Flying Kite Media and my stint at ExtrodinaryED in Collingswood.  Several of my early and mid-June blog posts chronicled those happenings and I couldn't wait to add this to the mix!  I mentioned it to a few people but I didn't want to talk about it in case a) it didn't get in the issue and b) I wanted to have the element of surprise of the published essay so that I could add it to the blog.

Now bear in mind that what I wrote was a wee bit longer than what was actually published.  The editors took liberties with my essay, culling out the integral information and  tidying up my story succinctly for its maximum impact, even if the final line isn't entirely true.  What I actually submitted as my story is this:

At the age of 42 1/2 I finally concurred my life long fear of driving and got my driver's license.  I grew up in Philadelphia and never learned to drive.  My mother never taught me how to drive and she herself has a fear of driving.  I got by in life by taking public transportation, via bicycle and through the kindness and annoyance of many friends.  I used to say that my not driving kept me young when in fact it kept me from being a fully realized adult.  I limited my choices in places I could go and jobs I could take.

When my partner and I were expecting our first son, she told me that I had to get my license because she wasn't going to drive herself to the hospital!  Her firm and persistent  prodding drove me to get my license.  A week before our son was born, I got my driver's license.  Now I'm able to drive where I want, when I want and share the burden of driving on long trips.

The biggest benefit of getting my drivers license was that it allowed me to drive to see and take care of my grandmother during the last year of her life.  Proof that the risk was worth more than my fear. 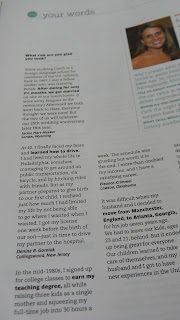 I know that I've written about my driving issues before but to have the story in print in a major publication is immeasurably cooler than sharing the story here for a few people to read.  This is a big deal to me, as was my learning to drive.  I occasionally have some residual driving phobias but I keep thinking about how much it has added to my quality of life.  In the nearly three years that I've been driving I was able to drive to Pittsburgh and do other long trips. We could move to New Jersey and I'm not dependent on taking public transportation any more! I have my own car! I can take jobs anywhere I can reach by car now!  While I didn't drive Liz to the hospital when Nate was born, an ambulance did that, I did drive her and Nate home when they were able to leave the hospital.  Best of all, as I said, I did get to spend that last year of Faye's life (my grandmother) visiting her several times a week, helping to take care of her. Earning that gift of independence so that I could help her made my license feel like a winning lottery ticket.
Email Post
Labels: blogs driving FailureSuccess Family writing