We decided to make or buy interesting light switch and outlet cover plates.  The idea isn't new and it's something I've done in the past, collaging over light plates, typically using stamps.  I haven't done it in years and am really happy to have rediscovered another artistic passion of mine!  We found a couple of nice plate covers at a store on Haddon Avenue in Collingswood, called, Arts Plus.  The hope is that we'll collect, or I'll make, new outlet covers over time.  In our new house, we have a lot of outlets, light switches and other utilitarian covers that could a bit of sprucing up.

The above bicycle cover was one of my creations, using a wrapping paper I found at The Paper Source.  Since many of the light switch plate covers I've seen on Etsy and other crafty sights weren't quite right, I made my own.  This one is in our downstairs half bathroom.  That room painted a Southwest Vivid Flame Orange, has become The Bicycle-Chef's decorated room!  Most of the artwork in here is bicycle related, hence the plate cover being collaged with retro bicycles.  I cut a few of the bicycles out and repositioned them so that the entire cover made more sense and was filled in along the areas where there was empty space.  That's the problem with a lot of covers I've been finding, there isn't an over-all artistic sense of the entire space.  The images might be nice, but artisans aren't considering the areas that are blank, nor are they taking into consideration the center spot where the light switch is located!
Some of the other artwork or hand-crafted items in The Bicycle-Chef's room are either bike-related or just great pieces of art that we've collected over the years and now have a place to reside. 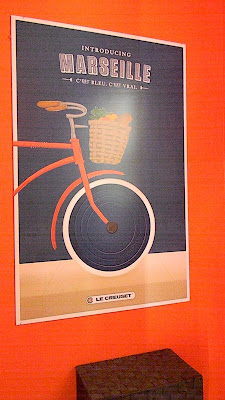 The center image is a poster I got from the very nice folks at Kitchen Kapers at 17th adn Locust Streets.  It's a new poster advertisement for a new colour line of Le Creuset cookware, Marseilles, a sort of French Blue.  The wheel of the bicycle is the lid of Le Creuset pot!  It screamed to me as I walked by the store one day so I went into the store and asked if they had another image that I could buy.  As it happened, they had a second poster, which they gave to me.  I had it mounted and now it's in our bathroom.  The yellow biker is the piece, DASH, a street artist who's work I love and document, made for me last October.  I've previously written and shared photos about this work. 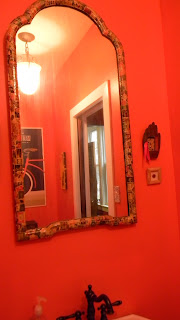 Not satisfied with light and outlet covers, I've done my stamp collage artwork on frames and mirrors too.  This mirror, one of two that I have, was done in the early 1990's, utilizing old stamps that I either bought to use as art, or saved.  The idea came to me from a piece I saw in a Besty Johnson boutique that used to be in Center City on 18th Street near Samson.  That framed mirror had dinosaur stickers laminated around the frame.  I decided that the stamps I had would look better.  Taking a good idea and making it my own.

This little painting, was done by a local Philadelphia artist named, Meghan Dinneen!  I bought it from a show at Nice Things on Passyunk Avenue in our old South Philly neighborhood, about a year ago.  It's a sweet little painting on a wooden board, varnished and simple hung with a wire stapled to the back of it.  I met the artist and we both tripped on the fact that her last name is the same as my first name, though spelled differently.  Plus, her art show was all bicycle related.  I wish I had purchased other pieces of hers.  I'll have to look her up or call or visit Nice Things again to see if she's still making bike art.
A collection of my Mexican Milagros in a hand frame, from Nogales, Mexico.  These were purchased on one of my trips to the Southwest during visits with my bestie, Rachel.  The hand frame has a small opening, about the size of a deck of cards.  Another great idea "borrowed" from someone else.  I saw a set of Milagros (Mexican charms and wish trinkets) at a friend's house.  She had hers pinned to a board, which was then framed and hanging in her kitchen.  Her collection of milagros was extensive.  As my collection is tiny, all I needed was a small frame or shadowbox in which to showcase them.

The lower painting, is on a penny! It's a cartoon version of Jimmy Rollins, #11, The Phillies Short Stop.  I had this "commissioned" for Liz's birthday about 10 years ago.  It was painted by local artist, Tom Lessner.  He and I worked together at The Reading Terminal Market in the early 2000's, cooking together.  I have a bunch of his doodles and drawings, one of which is a doodle of me riding my bike.  Hmm, gotta dig that one out and put it in this room! 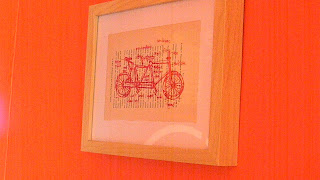 This last print, is of course, another bicycle art related piece.  Liz bought this for me two Christmas' ago and we finally have a home for it.  It's an illustration of a bicycle built for two, with it's parts diagrammed.  I have a tea towel with the same print too.  I especially love the frame print, as the image was done on a page from the book, The Portrait of Dorian Grey.  That's a favorite book of mine, though the subject is a rather grim and disturbing story.

Do you have any artwork that you love to do? What's your secret passion project?  Let me know! Or if you like any of the crafts that you see that I've made, let me know.  I'm thinking of making more to sell!
Email Post
Labels: art artists MarthaStewart photos readingterminalmarket