If you could be anywhere in the world right now... 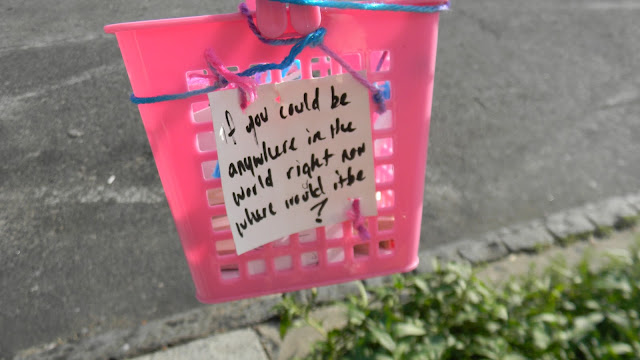 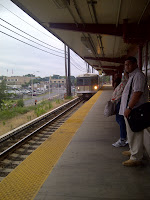 Friday night, June 1, 2012 - A day filled with many modes of transportation and events.  Biked with The Original Sue in the morning, leaving my house at 6 am to head to the Philly.  Started our ride at 6:40 am, completing two loops around the art museum and was at work by 8:30 am.

Biked home back to New Jersey.  Rode a total of 28 miles for the day.  Quick nap, showered, changed and headed back to Philly again for round 2: 6 pm Transformation Art Opening at Flying Kite Media 4017 Lancaster Avenue.

7 pm it was time to go back to Center City: grabbed a coupla slices at Joe's Pizza 16th and Sansom, an Espresso from Elixir Coffee so I could stay awake for the 8 pm Opening of The Opera Company of Philadelphia's Premier of DARK SISTERS.  10:30 pm Capped off the evening at Sotto Varallo for the Opera Company's after party. 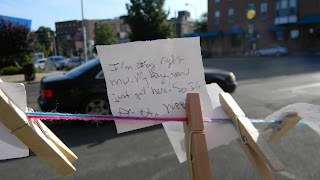 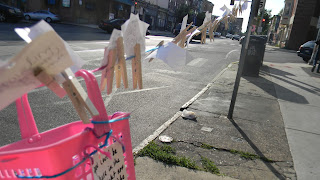 It took 3 modes of transportation and some hoofing to reach 40th and Lancaster Avenue; drove my car to the NJ High Speed line (I didn't want to drive into the City, as we had one car in town already!); hopped on the EL to 15th Street/City Hall Station then took the 10 Trolley to Lancaster Avenue, where I then walked 8 blocks up to Flying Kite Media's art and office space.  I didn't realize the trolley went right by the space, so I got off it as soon as I saw Lancaster Avenue. My feet hurt because I was wearing wedge sandals, but the walk was full of great finds.  I found a few art installations as well as a few architectural gems. 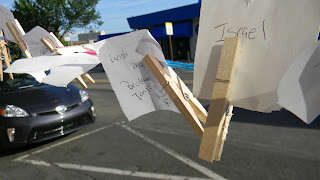 As I strolled up Lancaster Avenue I took a few photos and made a mental note to bike back up to this forgotten and (to me) largely unknown area of West Philadelphia.

Street Art installations are in abundance.  I photographed one of two I saw along 35th and 38th Streets along Lancaster.  Tied to two poles was a length of string with notes attached by clothes pins.  In the center was basket with paper, pens and extra clothes pins to use. 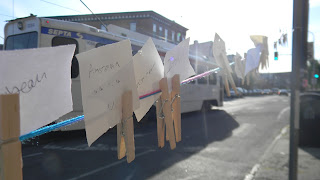 The basket had a question written on it that said, "If you could be anywhere in the world right now, where would you be?"
Answers were pinned onto the string, varying from one-word "Israel" to more prosaic thoughts.  Most were filled with longing and wishes for loved ones to be there with them. 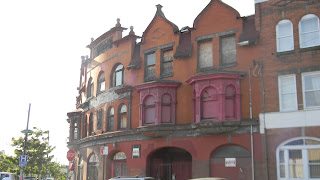 As I got closer to my destination, I found more fascinating art and buildings.  It feels like a secret underground of art and culture, more cutting edge than what's going on in Northern Liberties, Fishtown and Kennsington.  Those areas are hot beds of art, culture and life, always in the news; whereas what's happening in Powelton Village is much less profiled.

Part of the reason why I was heading up to this area was to attend an art opening at Flying Kite Media's newest space.  I'm going to be involved with their online magazine, contributing articles and ideas as well has having TheBiycle-Chef.com blog be featured on their website!  I hope to have more information to share on this exciting new venture/partnership soon.  The brand I've created here on The Bicycle-Chef is a great fit with what Flying Kite Media does - highlighting the interesting and off the wall. My involvement will continue to push forward my creative finds, bicycling around Philadelphia and South Jersey along with the fun stories, interesting characters, things and places I find along my bicycle sojourns. 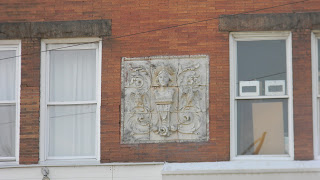 If the findings in Powelton Village are any indication of the stories and photos I can continue to document, I should be able to fill another blog with the  treasure trove of forgotten Philadelphia landmarks in West Philadelphia.  Places like a row of homes, at a cross roads section of Lancaster Avenue was one of the more unusual buildings I've seen in Philadelphia.  It was 3 stories high with a false top, curved, almost rounded at its center entrance. The building was ornate and embellished.  The above photo is a detail adornment on part of  a row of homes, a sort of bas relief of an Art or Neo Deco frieze. 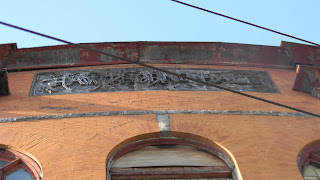 The main building turned out to be Hawthorne Hall - 39th and Lancaster Avenue, a former lumber yard, apartment building and a one-time school building for Drexel University. 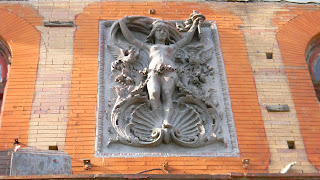 The building is deteriorating as quickly as the days pass by; much of its ornamental detail has either been stripped away, fallen off or lost to time and vandals. 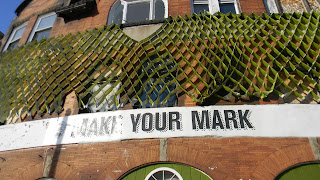 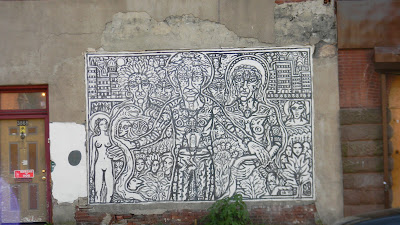 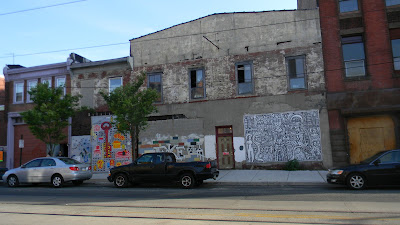 An art collaborative has taken over another part of the building. Artists have added their own decorative elements to the facade.  I believe this is all part of the revitalization of the area.  Across the street, on the exterior of another abandoned building, some familiar Philly street artists have put their touch on the building.  Since the work is so large, I wonder if if were intentionally installed? Was it an arts request proposed to these street artists? The giant, highly detailed black and white drawing/wheat paste that looks like a Santanna album cover or a work by Gaia is the biggest I've found in Philadelphia to date. 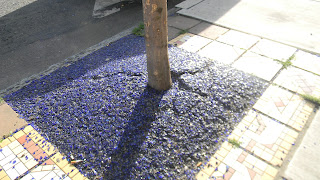 The transformation of Powelton Village is slow but thoughtful.  Little details like this broken and reused blue glass and tile landscaping around a city tree is an effective cover that adds an artistic element to an otherwise dreary sidewalk.


Other cityscapes up here make little sense, such as poorly reusing the old West Philadelphia Title and Trust Company Building, an anchor at the crossroads of Lancaster Avenue and 40th Street.  Compared to how many billboards that use to cover this magnificent facade, this building sort of looks like it did in the early 1900's.  This old neighborhood is in dire need of an infusion of money, hope and jobs. 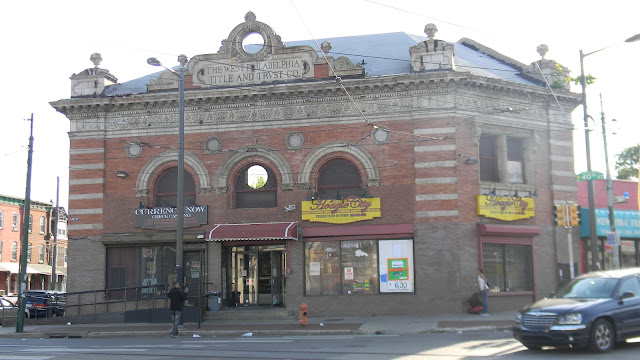 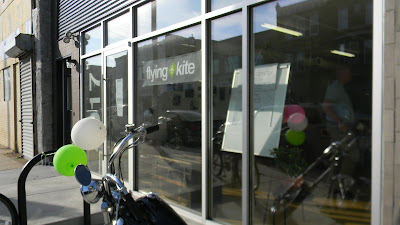 By the time I made it to Flying Kite Media's newest space there was already a crowd of artists, media people and friends, most of whom, especially in the case of the artist who's works are on exhibit, are all locals, living in Philadelphia's 19104 area - aka, West Philadelphia/University City/Powelton Village.  Flying Kite Media's aim is to transform an unknown or forgotten area by bringing attention to it via art, media insights and social media presence.  Their first event in October transformed a storefront on South Street into an art gallery.  The space at 4017 Lancaster is an art gallery, meeting space, offices, media hub and neighborhood outpost with the aim of bringing neighbors together.  The work that Flying Kite Media is doing is helping to bring the community together, giving the area a social and media presence. Flying Kite is also giving a voice to the people here who are doing the valuable revitalizing work to truly transform this neighborhood into something special.  It's positively inspiring! 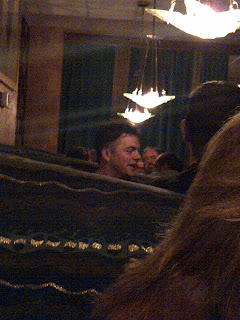 Changing venues and trolley's again, I headed into Center City for the last event of the night, The Premier of DARK SISTERS.  We attended the Opera Company of Philadelphia's after-party for Dark Sisters.  Above is a  photo I snapped with my camera phone, of Nico Muly, the composer and the Wunderkind of the opera world.  Attending the premier of Dark Sisters deserves its own post, but I'll leave that up to the critics, reviewers and opera buffs of the world to dissect and discuss.  I enjoyed the opera very much, the casting and vocals of the women and leading male protagonist were well cast. The performers did a remarkable job with a difficult subject matter of polygamy - the sister wives of a cult sect of Mormons.  Our best friend, Jennifer Check, was one of the five wives, so while I am extremely biased towards her amazing performance, I'm not so enamored of the opera not to realize that it could be better - tighter, with better orchestration and transitions from one half to the other.  The review in the Wednesday edition of the Philadelphia Inquirer said better what I felt but couldn't quite put into words.

It was a whirlwind day and night. If I could have been anywhere in the world, I still would have chosen all the places I traveled in this one day! For this day in my life, I was in all the right places at all the right times!
Email Post
Labels: art artists biking Findings FlyingKiteMedia parties PhiladelphiaSights photos StreetArt WestPhiladelphia