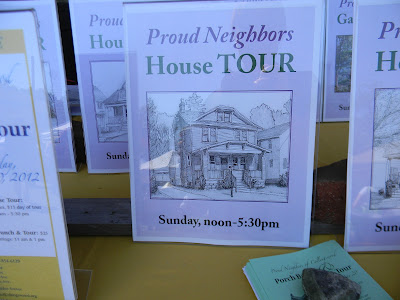 We had our house on the Annual Proud Neighbors of Collingswood's House Tour this past Sunday.  We literally had HUNDREDS of people coming through our house from 12 Noon until 5:30 pm.  Call me crazy, because I'm certainly calling myself crazy for agreeing to do this after only living here in the house for six months.  It was a fun and exciting day, filled with a lot of laughter.  We met so many wonderful people, heard so many complementary things about the house and have hopefully made a number of new friends and acquaintances in our new home town.  The day, while long and exhausting, was so worth the energy that we expended; the positives of the experience far outweighed the work we put into the day. 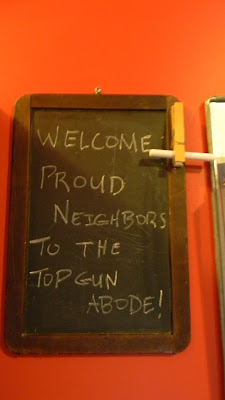 I worked for a few weeks on getting the house ready for viewing.  There wasn't that much to do but we really needed to clean, declutter and hang up art work.  About a week before the tour, we had our final two rooms repainted that were left undone; the 1st floor bathroom and our bedroom.  We lived with the original (previous) owner's colours but realized once the rest of the house was patched and repainted that these two rooms needed a make over too so that they would look showroom worthy. Plus the colours didn't go well with the new palate we chose.  Other than the repainting, I spruced up the lawn and garden and bought a few plants for the front porch.  Even though I worked tirelessly during the week leading up to the big tour day, the house was ready for its "coming out " party! 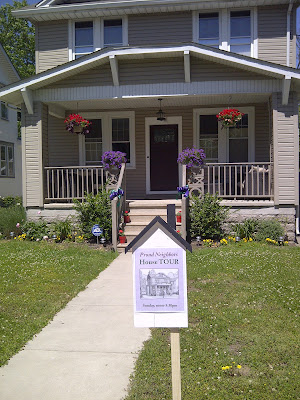 Sunday morning I did the final dusting and organizing and took Nate out for an hour so we could get ice and lemonade for our guests.  When we came home, the Proud Neighbors Committee had installed the sign on our lawn and the ribbons on the porch banister.  All wrapped up complete with bows!
At 11:30 am, the first two of our many volunteers arrived to help with the tourists, as well as help me wrangle Nate for the afternoon.  We were blessed with several amazingly patient and calm volunteers, Dave and Connie, and then Linda and two students from Collingswood High.  Dave got practice in either parenting 101 or learned a lesson in that he doesn't want to have kids after spending almost 2 hours playing with and chasing Nate all around the house and yard.  In a true, six degrees of separation fashion, it turned out that Dave works with an old friend of mine; he lives a block away from us; and his wife, Susanna, is a mutual "FaceBook" friend of mine, "introduced" to me via Dave's co-worker and my old buddy, Alysse. 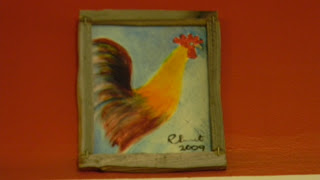 Our other volunteer assistant, Connie, is friends with our colleague, Susan Pollock, a singer who has worked with and for Liz at the Opera Company and other music venues.  In addition to this connection, I had heard about Connie and her partner, Marge.  They are legendary in Collingswood, known for their parties, their wonderful house and hot tub, their love of the Phillies and for being gracious and fun loving hostesses. 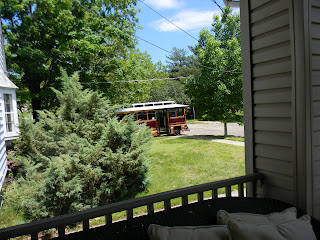 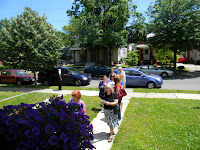 At Noon on the dot, the first visitors arrived and a steady stream of people came traipsing through our house.  At several points in the day, a trolley or bus brought crowds of people to our street, unloading so many people at one time, the line of visitors went down the street and around the corner to where the trolley was parked.  When I saw the line of people I nearly fainted! I could not believe my eyes or that there were that many people waiting to see the house! 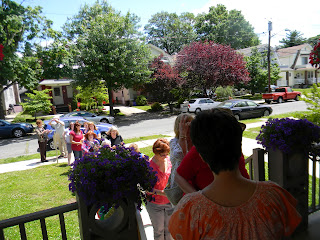 I managed to grab my camera just in time to capture a smaller amount of people at the front door and walkway, just to show that indeed, I wasn't' exaggerating!  This was the tail end of the first onslaught of people!  I was so parched after talking to so many people for hours on end! 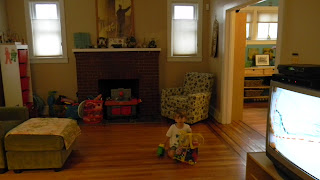 Nate did remarkably well considering he didn't nap all day and that we had so many strangers in and out of his house all day long.  Liz and I had our sitter and friend, Andrea, come over to help with Nate, but he wanted to either be with one of us or to go to the park or out for ice cream.  Just having the extra person on hand was a god-send, providing back up and moral support as well as an extra story-teller! 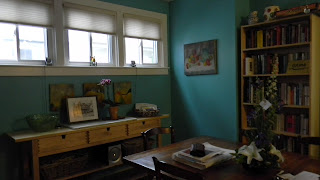 We met many people who knew about our house and a lot of its history.  The general story is that it was in serious disrepair for years.  It went through many owners in its 90 plus years of existence.  Neighbors from our street and a few blocks away all remember how run down it was; it's original look and condition; they knew about the former kitchen lay-out and remember that it did not look the way it does now.  One woman had been a realtor who had sold the house 3 owners ago.  She said it was so bad that they had no interior photos of the house to show.  Of course, this was in the days (not so long ago) before you staged houses and put  photos onto the Internet so you could sell it faster. 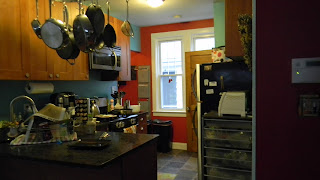 This same woman remembered that the kitchen was in a different layout and direction and that where our half bathroom is used to be the area where the refrigerator was! 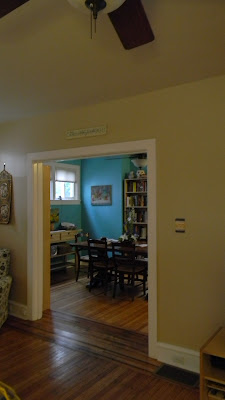 Another woman was friends with the family who lived in the house decades ago.  She too reiterated that the house was a mess!  Too many kids, not enough money to keep up the house.  A third woman, a neighbor from a block away remembered the house and was so pleased to see that it had been brought back to life.

One of the committee people came towards the later part of the day and we spoke for a while about the selection process and her work with Proud Neighbors.  Bunny Hare (really! that's her name, and Bunny came first; she married Michael Hare!), told me she had been trying to get this house on the tour for years and years ever since it had been renovated.  The owners who flipped and renovated it and then the woman from whom we bought the house never replied to their requests! Here we thought they sent letters to everyone in hopes of getting a few responses! Nope, they wanted to see and show this treasure box.  I was right, they really liked this house, as do we.  Every day we wake up and are so grateful to live here, to have a beautiful home and to have ample room for Nate to play.  We are grateful and appreciative for all the hard work and money other people put into this house so that we could make it our home. 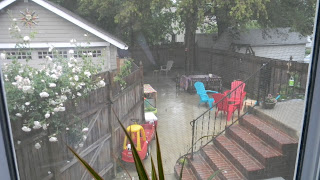 At the end of the event, and all of Monday and Tuesday, Liz and I could not stop remarking on how crazy it was that we had hundreds of people come through in one day.  It was one of the most unusual and fun experiences we've shared together.  I'm not sure I want to do it again any time soon but it sure made me appreciate even more the wonderful home and town in which we live.  I'm proud to be part of the Proud Neighbors of Collingswood.  I'm also a crazy neighbor, but that's what makes me unique!
Email Post
Labels: art Collingswood joy OneHundredStrangers photos