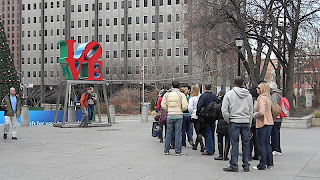 I have not been biking in a month, since the big move from South Philly to Collingswood, NJ.  I have my road bike in storage in our new garage.  The commuting bike has been locked up in an out of the way corner in my workplace.  I've been debating on the best way to get it to the new house - take it on the PATCO line, pick it up and take it apart so it'd fit in the back of our car, or ride it home through Philadelphia, over the Ben Franklin Bridge, through Camden and then to home.  After a month long internal struggle and trying to find the right time to do this, I finally made my decision - ride the damn bike home on a clear, unnaturally warm early winter day like this past Friday when I finally had the time. 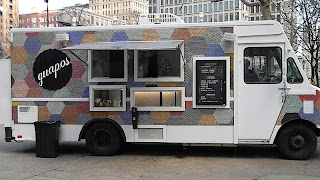 So ride I did. But first I took a few detours on my way home, stopping by "Love Park" at 16th and JFK Boulevard.  I hadn't intended to stop here I was only looking for some street art rumored to have been placed at the train station.  Instead of finding a Monopoly installation of the Reading Railroad superimposed on the Penna Station sign, I found three awesome food trucks; Guapos Tacos, Rival Bros Coffee and a cup cake vendor. 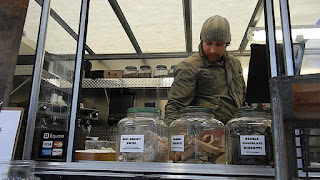 A Bicycle Chef girl has to eat lunch, so I stopped for lunch.  Had two carnitas taco from Guapos Tacos - 7 bucks, very good and fresh, topped with a zesty jicama and black bean salsa. I could have eaten two more and I downed these practically in two bites!  Then to give myself a jolt of energy I grabbed a coffee from Rival Bros for the road.  I thought about a sweet, but since I've been indulging a lot lately, I skipped the biscotti and rice crispy treats the coffee bros were selling and I skipped the cup cakes that were for sale by the 3rd vendor at the corner of 16th & JFK, outside of the visitor's center. 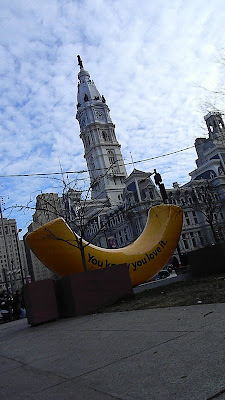 There were ample photo opportunities at every turn.  Between the new and old City Landmark Sights like the LOVE stature with dozens of tourists posing beneath it and the new Kraft Mac & Cheese Noodle sign, I didn't need to look for found street art, the kitchy landmarks were providing me with many laughs.  But I'm always on the lookout for my beloved street artists so my eyes were wide open for the treasure hunt. 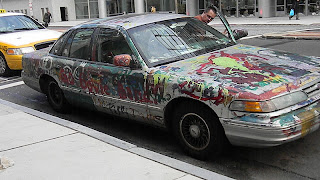 Outside of the PA Academy of Fine Arts, in front of the new Lenfest Plaza, I pondered the atrocious paint brush installation by Claes Oldenburg and the paint dap.  The paint brush is trite and the paint dab looks like a big pile of shit - sort of like those old gag joke-shop fake dog-doo poops.  No photo, everyone in the City is taking one and I'm not adding to it. 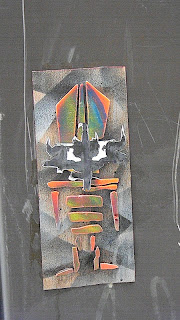 I did spot this artist's car that looks like a version of a painter's jeans after he's wiped his brush on them to clean the brush. Now this was much more interesting.  On a utility pole in front of PAFA was a double street art find, a modern version of the Sti(c)kman/Robot Tiles with a superimpose or graffiti of another street artist's work.  Kind of like an ink blot.  Hmm, a theme here perhaps? 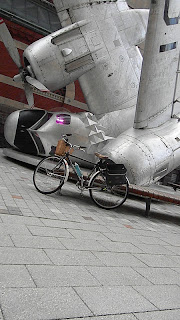 I find the airplane crash landed in the plaza between the old and new PAFA buildings very disturbing and at the same time clever and thought provoking.

I like the touch that was recently added by installing a pink-greenhouse inside the cockpit. For a real pop-culture reference the installation reminds me of a set piece from the television show, LOST.  What do you think? What comes to mind when you see this installation?

And ending my street art tour of Philly, I found another one of my favorite's - DASH - and his timely pop-culture mash-up of a Dick Tracy installation at the corner of Race and Broad Street.  I just now noticed that he's called it Dash Tracy.  Very Clever dude, very clever!

Rode the rest of the way home down Race Street, through a very busy Chinatown and then over the Ben Franklin Bridge.  It was a tougher ride for me on the heavy one-speed old school collegiate Schwinn.  Add the 5 pounds I've gained in the past few months and the fact that I haven't exercised in over two months and I really felt like I was having an asthma attack.  I made it though and didn't have to walk the bike up the bridge's pedestrian walk way.  Then I had to make my way through downtown Camden along Haddon Avenue to my house in Collingswood.  I've done the ride before, when I was in shape, on my road bike, with my riding partner, Sue S.  At least I knew where I was going.  It's a bikeable ride home, just about 10 miles.  It's just not a ride I think I should be doing though.  There are some tough stretches of streets to traverse. 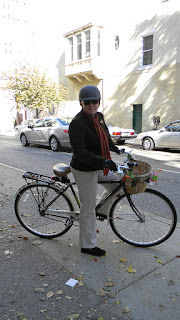 Here I am, an old white girl, riding this ridiculous bike while wearing my English-style horse riding helmet, biking on a one-speed through the mean streets of Camden.  At one point, I got stopped in some traffic on Mt. Ephrim and Haddon Avenues.  There were ambulances racing through the streets probably to some gun fight and all these cars were blocking the flow of traffic across Mt. Ephrim Avenue.  A woman in a red Monte Carlo flips out of her car and starts screaming at the top of her lungs, "Move your fucking car mother-fucker out the fuckin' way! Shit!"  I never pedaled so fast.  All I could think next was that guns were coming out next.  A woman passenger in the car next to me was putting on make up and talking on her cellphone.  Cars couldn't go anywhere.  It was a bit of drama to say the least.

The ride took about 40 minutes and I made it home in one piece, feeling the uphill bridge ride in my lungs and legs.  I miss riding, the freedom, the exercise and the sense of being a part of a riding community.  Not that I want to make a New Year's resolution, but I do want to put biking on my must do list.  I'd hate to think that by the time spring arrives I'll be so far out of shape that I'll be back where I was in 2007 when I first started riding again.  Plenty of good riding in Collingswood; most of which won't take me in the line of fire.
Email Post
Labels: biking FoodFinds PhiladelphiaSights photos StreetArt