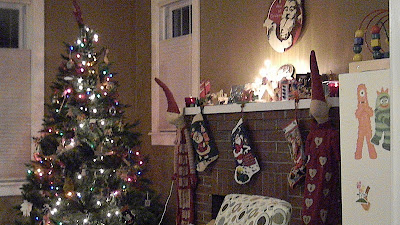 We celebrated our first Christmas in the new house
and it was even more wonderful than we imagined it would be. 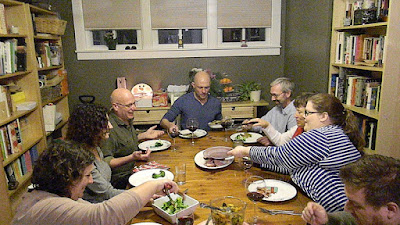 Technically, we had a "Boxing Day" celebratory meal in our dining room, with friends and family.  Christmas day we went to Liz's Dad's house in Easton and spent the day with the other side of our clan: Sister, Brother, Sister-in-law, nephew and nephew-to-be, Step-Mom, Dad, Aunt.  It was a big noisy joyful day filled with a lot of great food and presents.  The boys, Nate and Nephew/Cousin Dylan spent the day running their Papou ragged, playing, rough-housing and exploring in all the non-child-proofed areas of their grand parents' house.  Back at our house in Collingswood, we had guest come over all day and evening, spending the night and continuing the festivities until Tuesday evening.  Christmas for us last three whole days! 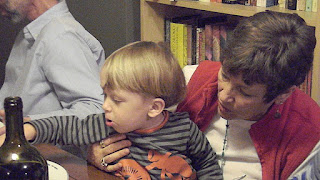 Nate, with his Oma Maggie, as he tries to steal a cookie, or a piece of cake, or maybe even a sip of wine.  Who knows? Our table was laden with many goodies! 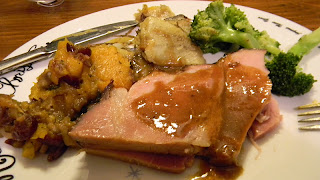 I may not be blogging much about new recipes and food finds, but that doesn't mean I'm not cooking and finding new things to create.  Au Countre! I discovered a new way to use butternut squash and cannot wait to tweak it a bit for my own Bicycle-Chef recipes.


Roast butternut squash cut into large chunks & toss with a bit of olive oil, salt, pepper, sliced onions and diced fresh chestnuts.  When it's caramelized and tender (after about 45 minutes in a 375 degree oven) put the roasted butternut squash into a bowl and stir in cleaned fresh spinach; the heat from the squash will wilt the spinach.  Toss in dried cranberries and serve hot immediately.

We also had scalloped Japanese Sweet and Idaho Potatoes, sliced thin, layered in a baking pan with minced onions, salt, pepper and olive oil between each alternating layer of sweet and russet potato.  For the main course, I made a brown-sugar cured bone-in ham, with a glaze of Dijon Mustard, molasses, dark beer, hot sauce and smoked paprika.  Roasted the ham for 2 hours at 425 degrees and then let it rest before slicing. 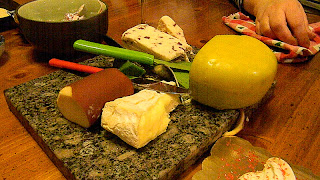 Cheese - some from Wegman's and some brought back to the States from Amsterdam by our friend, Jen. She brought this amazing pesto Gouda that's emerald green and very herbaceous.  There was also a smoked cheese that went perfectly with a slice of Sicilian Salami.  Also on the cheese board, an earthy, creamy brie and a Stilton with dried cranberries.

Of course there were also cookies of all kinds and the Bouche d'Noel from DiBartolo's Bakery on Haddon Avenue.  I'm not a big fan of icing but the cake was very moist and fresh.  The icing tasted too much of shortening. 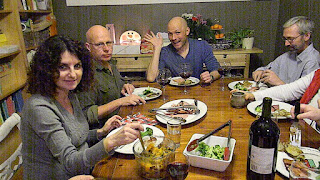 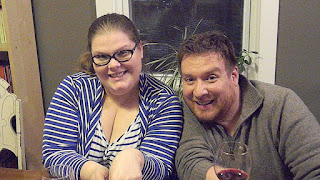 We drank lots of wine and beer, ate lots of great food and everyone was engaged in endless laughter and conversation around our table.  At one point, Nate was running around through the dining room, into the kitchen, up and down the steps that lead from the kitchen to the living room and back around again.  People were whooping it up at the table and the wine was flowing.  It was a raucous joyous time.

Both Liz and I had real moments of realizing that this was exactly what we had hoped and envisioned but we didn't realize it until it was actually happening.  To share a holiday meal with people who we love so much and who bring us so much happiness was the most extraordinary gift of the season.