A few weeks ago, I saw a photo on my Flickr contact feed that showcased the above Street Art Installation on the green street pole to the top right.  As the installation is in Center City, on a street that I ride along nearly every day, I knew I needed to go and find it to photograph.  I made a comment on my contact's page, stating that this was an installation that I needed to have - more than just to photograph, but it spoke to me.  Street Art and bikes, it all goes together so perfectly.  A few days after I saw the photo online, I set out to find the install and take my own photos. 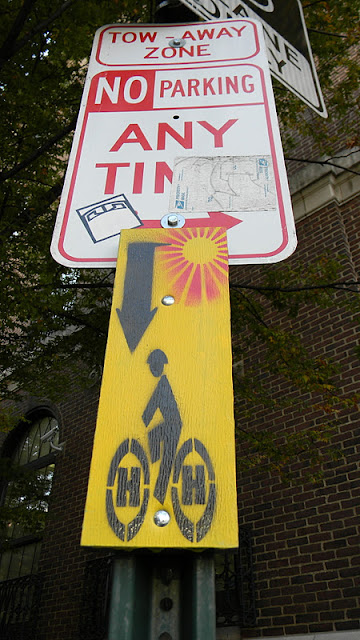 This piece is big - larger than most of the work I find around town and you certainly cannot miss it, positioned so prominently on the pole, along the well-traveled bike lane.  It's bright yellow paint and direction arrow matching the bike lane images.  The artist who created it is called DASH - a fellow who's work I've been documenting, seeking out and following since I started taking photos on a daily basis over these past 4 years.  This is by the same artist who did the Neeny installation in South Philly - that was a riff on my nick name - Neeny or Neenyd.  I found it and added it to the photos on my online photo server, pushing my street art finds closer to 1000 images and finds!  Imagine my surprise then when I received an email from one of the artists, inviting me to meet them at First Friday in Olde City this past weekend.  I wrote back that I could make it and asked where could I find them; the follow up email told me to come down to The Arden Theater and that they had a little giftie for me of the bicycle installation!  I was jumping out of my skin with excitement! 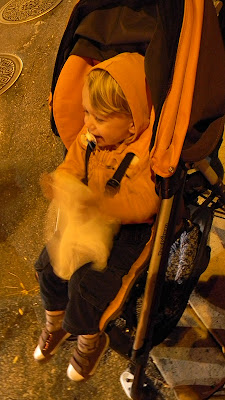 Liz, Nibblet and I bundled up and headed downtown for a stroll in Olde City and the First Friday events.  It's been years since Liz and I have gone to First Friday - more than 4 years I think; certainly more than the two since Nibblet's been with us!  We figured it's time we indoctrinate the little man into the art scene of Philly.

First Friday has changed a lot since it began close to 20 years ago.  The scene now is much more on the streets - dancers and theater companies were out on the corners, handing out fliers and doing impromptu pieces from upcoming shows.  Protester groups were set up with petitions, hand outs and encouraging people to participate in upcoming events, protests, and OCCUPY movements.  There were all kinds of folks selling hand made crafts; knitted creations; jewelry; vinyl sticker decorations for your lap top; beautiful Polish and European Stoneware.  There were free dance events in the Arden Theater and I'm guessing the galleries were all open with new shows.  The vibe was definitely more interesting than it was when I last went downtown to gallery hop. There was a diversity of people that I've not seen before; it wasn't the usual middle class white crowd and the poor starving artists trying to be the next big thing.  It was a more genuine, of the people on the streets kind of feeling, much like the scene should have been when it first began but instead got appropriated by the 1990's yuppies.  The energy was truly electric.

As Nibblet and I rolled up to the Arden Theater, taking in the whole event and looking at all the artwork on display and for sale, DASH found me.  Since I have so many photos here, on Flickr and on Facebook, I guess I'm pretty easy to spot.  I met DASH and Willy The Fool, as well as Sloth and Krispy.  DASH handed me an even cooler version of the bike lane installation - with the City of Philadelphia Skyline added to it.  Then the other artists handed me a mega cache of stickers and hand drawn art of their work, along with other artists who's work I follow: Radius, Blip, Bad Dog, Huggie, Sarge, Robots Will Kill, Under Water Pirates and many other artists who I like.  I felt as though I won the art lottery.  We chatted with the guys, talked about how I've been photographing their stuff for a few years now and that most days it's like a treasure hunt throughout the City to find the next piece.


Meeting these guys was much like meeting anyone who's art/talent/intellect that you admire.  There's that awe then you realize they are just regular people, creating art because they love it and that's what they do.  Some of the guys are young, but they are all hard working and care deeply about the art they make.  I read an interview with DASH in a local 'zine that DASH is a former graffiti artist, a dad and a deeply committed artist to his craft.  It surprised me to read this as I assumed that he was a younger man, not a parent and not someone who plans out his work so carefully.  As a former graffiti tagger, he no longer wanted to make his art these statements that were illegal, yet creative, especially given that he now had kids to whom he was setting an example.  Out of his former tagging came these small master works of art created on cd's, small mdf boards, wood scraps all secured to poles and street signs with long bolts and nuts.  They're placed onto existing street sign poles with no actual destruction.  I like to think of the pieces as embellishments to otherwise boring utility poles.  Some are very small, 3 inches by 3 inches.  Many last for months, even years.  I love to re-find old pieces and see how well they've held their own among the elements of time, other artists and the Streets Department workers.

Most of the sticker artists' work last only a few weeks with the sun and rain wearing the works out before they've been fully appreciated.  There are other artist slapping up stuff over the work too, making it a sort of meme street art war of egos.  There was no ego war going on during my meeting the artists - they were all friendly, extremely kind and exceedingly generous.  After all of these years documenting these finds, I now have a collection of actual art to call my own.  The gifts were a thank you and an appreciation for my being an avid fan and photographer.  Can't wait to frame the stickers and to find a place of honor for DASH's painting in our new house across the river in New Jersey.  I also cannot wait to keep finding more art along the streets of Philadelphia and hopefully, in my new hometown of  Collingswood, NJ.