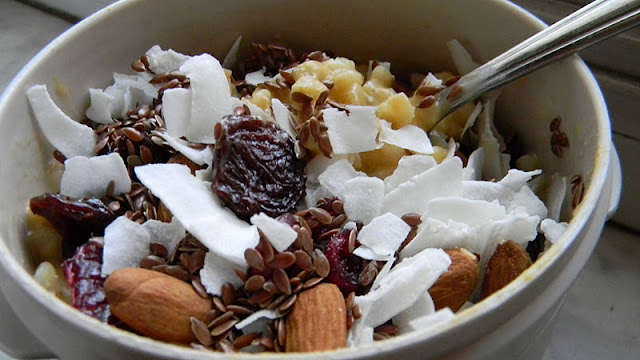 When it gets colder I want to eat hot cereal for breakfast. I'm not content with Quaker Instant Oats anymore, having graduated to more hearty grains.  As a kid, I ate the instant oatmeal packets.  Shudder to think how much sugar and preservatives I ingested.  Being from South Philly, I also ate a fair share of pastina, the tiny Italian pasta for babies - it's the most minuscule pasta grains, usually cooked with butter, milk and sugar or as a savory with butter, milk and cheese and almost always with an egg beaten into it just before it's done cooking.  During my love-affair with all things Martha Stewart in the 1990's, I got into toasting my whole grain, minimally processed lightly rolled organic oats before cooking them in a flavorful water and milk "bath".   Toasting the oats before cooking makes them taste nutty -  it's a good thing!

These days I find that I want multi-grain oat blends, or breakfast couscous or I'll make quinoa porridge - as I wrote about on The Bicycling Hub's blog as a guest blogger a few weeks ago (read all about that here at this link!)  My co-worker, Phyllis, and I often talk about the many ways you can use barley outside of barley soup recipes.  One great idea that I've been wanting to try is using barley as a risotto.  It's kind of a misnomer, as a true risotto would use arborio rice but the idea is the same.  You bring out the starch from the grain in order to have the final dish be thick and creamy.  Barley is a wonderful naturally nutty grain, toothsome, hearty and protein dense.  It can be used for a side dish, breakfast, in spirit (beer/wine/whiskey) productions, in breads, as a soup and stew ingredient and as a breakfast cereal.  In short it's perfect and it is easy to cook.

As I wrote in my guest blog post about quinoa, you can make a batch of barley risotto for breakfast but you can also use it as a savory meal, all by the application of what you decide to add to the final dish.  It's important to flavor the cooking water to start with a base of flavors.  I used a cinnamon stick, some chopped candied ginger, a pinch of clove and a generous dash of pure vanilla extract in the cooking water.  The featured picture  of my pumpkin barley breakfast risotto could have been my dinner if I had not added maple syrup and seasoned it instead with salt, pepper and olive oil.  However you decide to use this recipe, make it, you won't be disappointed and you'll have a new hearty winter recipe to make that will stick to your ribs on the cold days ahead.  I've made suggestions on dried fruits, seeds and nuts to embellish the final dish.  Use what you like and what you have on hand.