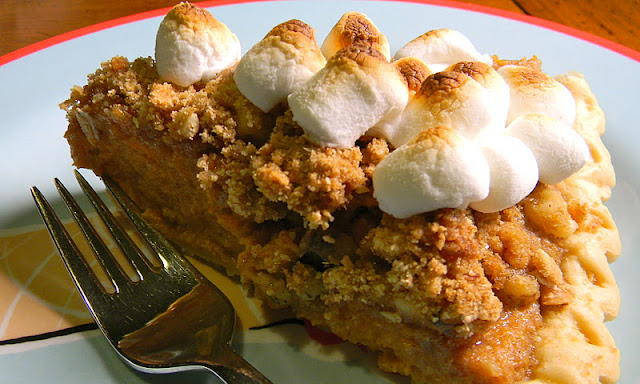 We are officially in the season of indulgence. It starts with Halloween and all the trick or treat candy, caramel popcorn balls and candy corn.  We move right into the over-eating carb and tryptophan festival known as Thanksgiving. Next we roll ourselves over towards Hanukkah Donuts and Latkes, Christmas Candy, Hams and Pies topping ourselves off with splits of champagne and buttery rich hors' doeuvres for New Year's Eve. I like to think of these next two months as the Season of Too Many Extra Pounds.  It doesn't have to be this way — there are many ways to eat real, tasty and good for you foods that no one need know you've trimmed, slimmed and tweaked.  Over the past four years that I kept the 60 pounds I lost off of my body and maintained my weight, I have found a lot of ways to eat what I love without  banning my favorite treats from the holiday table. 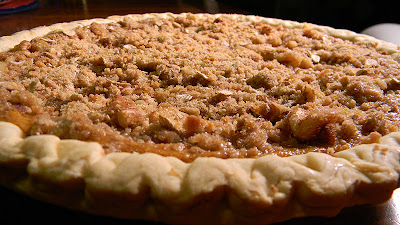 Last year I made a lighter pumpkin pie for Thanksgiving, cutting back on the sugar and fat without compromising taste.  This year I discovered the same thing could be done with sweet potato pie.  We recently saw an over-the-top decadent sweet potato pie on my favorite show, Diners Drive-Ins and Dives.  It was made with lots of brown sugar in and on top, butter, pecans, and brulled marshmallows.  I nearly caved in and made the exact recipe until I realized that a piece would equal my dessert sugar, fat and carb intake for a month.  My options were to figure out how to lighten this classic Southern dessert and still keep it rich and luscious.

We received too many sweet potatoes from our CSA farm share, getting the sweet tubers every week for almost two months.  I was swimming in sweet potatoes.  It was a classic moment of when life hands you lemons you make lemonade.  In my case, I made a delicious Sweet Potato Pies with some interesting swap-outs.  I used non-fat evaporated milk; cut the sugar down to a 1/3 cup; roasted the sweet potatoes so they would be naturally sweet; and substituted Egg-Beaters for the whole eggs.  For the topping, I used a combination of chopped walnuts (they were what I had on hand); whole wheat flour, light butter and some brown sugar.  My only cheats were on the pie crust - I didn't have time to make my own and I didn't want to improvise on the crust by using a graham cracker, or phyllo dough crust.  I also "cheated" with the marshmallow topping — using mini marshmallows which I ran under the broiler element in my toaster oven.  You can splurge here as there is little fat in the pie custard and marshmallows are fat free.  They are pure sugar, but you use only a few marshmallows per piece of pie so it's okay!

Once you realize that making a sweet potato pie is almost the same as making a pumpkin pie — which is making a custard — the baking is easy.  I often say and write, I'm not much of a baker, but when I have a pastry or baked good that I know and understand, the scientific process is easy.  Read the recipe, make and bake it, then improvise once you know it inside out. 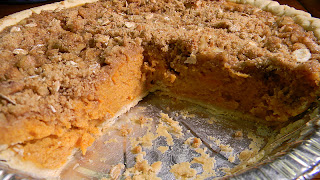 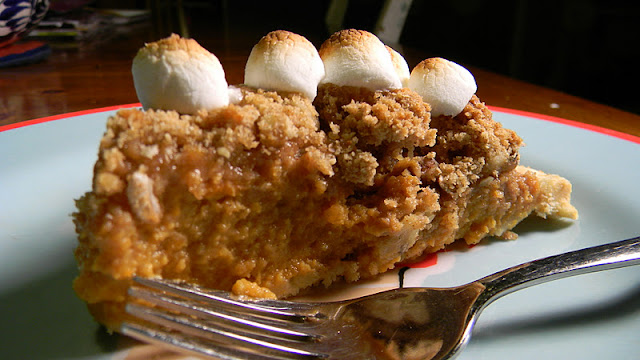