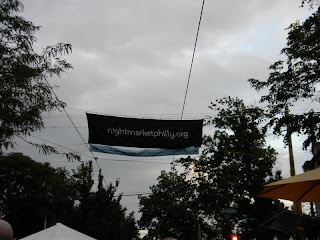 The 3rd Annual, nearly quarterly Night Market event happened this past week in Mt. Airy Philadelphia. It was held on Germantown Avenue, between Carpenter Lane and Segwick Streets - span of about 8 blocks.  To say it was a smashing crowded success doesn't begin to scratch the surface of this well-organized fun event.  Night Markets are happening local foodie and beverage events held in various cities around the country; New York, San Francisco, Los Angeles, wherever there's a deep decent food truck scene, there's bound to be an evening event held in the city, with the information about its location spread via social media outlets.  Finally, Philly's gotten into the hip and cool vibe and has started doing these events on what appears to be on a quarterly basis.  The first one was held in South Philadelphia last Fall, on Passyunk Avenue - the first huge indication that the neighborhood is a definite foodie destination.  That  Night Market event was packed and fun but it appeared that the food truck vendors were over-whelmed with people clamoring for their food.  I went, saw what I needed to see, ran into a few people but got nary a bite to eat.  Thank goodness I live within walking distance so I could go home and eat.  Besides, I had little time to waste in long lines since I had the baby sitter home with Nate.  My night out would have become as expensive as a dinner out at a 4 star restaurant had I braved the lines for a taco or cupcake. 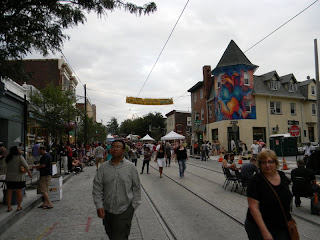 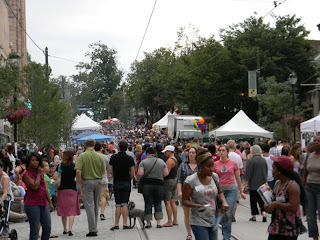 We, Liz, Nate and I (well, Nate had no choice in the decision) drove up to Mt. Airy for the third Night Market Event.  It's not a far drive but there's no other way for us as a family to travel the 10 miles or so to get to this most interesting and happening neighborhood North East of Center City, near to tony and snooty Chestnut Hill.

We were astounded by the crowds and the family friendly atmosphere.  The music and food vendors were in abundance, as were the strollers, walkers and happy people. 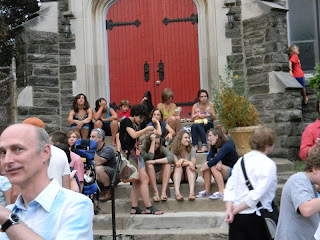 Crowds of old and young, folks from this area and from destinations afar came out to enjoy the finally cool and humid-free summer night. 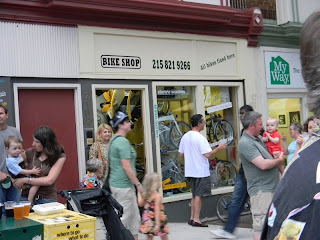 Families with babies, BABIES who were welcome and smiled at, were out in full force and none of us felt badly about having our kids in tow or our strollers in the way of anyone's feet! 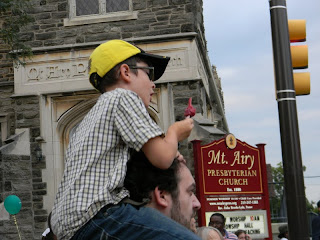 Getting a higher view of the New Orleans style brass band - this fellow is enjoying his fruit Popsicle. 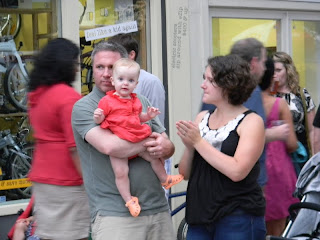 She's grooving to the very loud and very fun sounds of tuba and brass band. 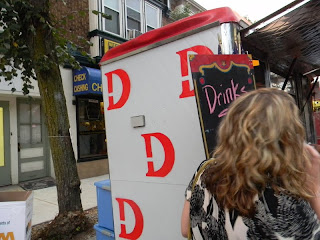 Dapper Dog Hot Dogs - I stood in line for nearly half an hour to order my dog and then waited another 5 to 8 minutes for it to be ready.  By the time I reached the order station, their most popular dog, one wrapped in asparagus was gone. I had a Dapper Dog with grilled onions and roasted peppers on a soft hoagie roll with sharp provolone.  5 Bucks.  Was it worth it? Sort of.  It was good but not great.  The dog wasn't snappy enough in that it was quickly cooked and needed a bit more time on the grill.  The roll wasn't too fresh, it had that taste and texture of having been in a plastic container - too soft and heading to stale.  The cheese was good but for 5 Bucks, I'd have liked something more on the dog.  More toppings and a better quality roll.  Amoroso's may work for an event on the Parkway but it ain't working for me at a major league foodie event touted by the best and brightest of the Philadelphia Food Trust and Vendy Award Winning Food Trucks. 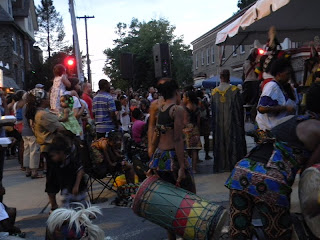 More musicians and dancers - African Step Dancers and Drummers - performing on stage in full costumes and traditional clothing.  Even Nate enjoyed this group, the bright colours and syncopated beats were easy for him to feel and see. 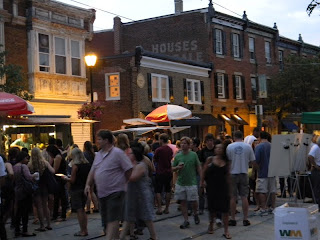 The Night Market started at 6 pm and ran until 10 pm.  By 8 - 8:30, the crowds were still strong and the food vendors started to slow down.  We had a difficult time getting food, other than my Dapper Dog and Liz finding a grilled chicken and pesto pannini sandwich.  There were several beer and wine tents - but good luck trying to have a taste of anything form Beer Earth Bread - the lines were at least 30 to 45 minutes long.  For a family friendly function, the lines and food choices were not at all conducive to getting something for our little Nibblet.  Nevertheless we had a very good time. 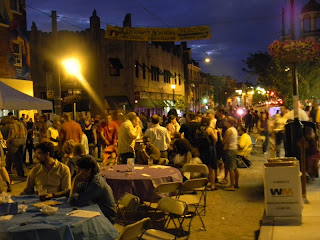 What I'd like to see at these Night Market events is a better flow with the food service trucks and vendors.  It's one thing for them to work like they do when they are out on the streets during the day at whatever spot they tweet about and meet their fans. It's quite another kind of need when the event is a well publicized event where hundreds, maybe even thousands of people are coming, hungry, with money in their hot eager hands and want to spend and eat.  You can't have slow service and food prepared per order for hundreds of people.  As much as I dislike large scale street events with corporate catering, there is a valuable lesson to be learned from what the pros like ARAMARK or Sodexo do - and that's have things ready to go with line and crowd control.  You can keep the cool hipster, "real" vibe going but hey, this was my second Night Market event and I've only eaten once.  Not cool, not cool at all. 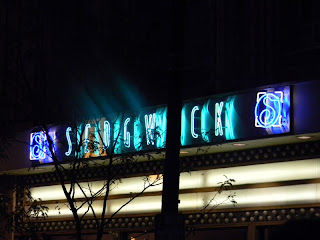 Food and drink issues aside, I did go to the even to take in the sights and sounds and that we did in abundance.  I enjoyed many sights and sounds of places I never before saw or experienced, such as this old theater that's been given a new life - The Sedgewick - a great old Art Deco Building. 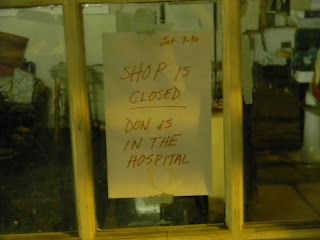 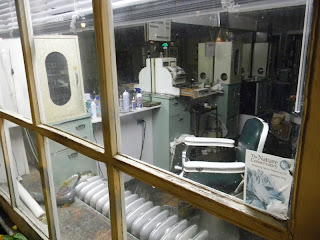 Don's Barber Shop is literally a time capsule - and it's still 1952 inside and out. 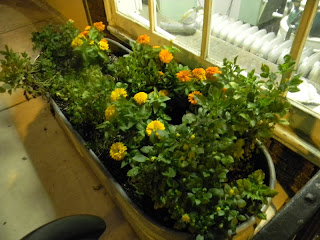 He or someone has placed a huge farm washtub trough outside the shop
and filled it with bright and pretty flowers. 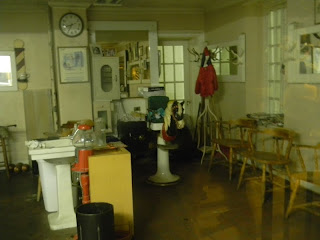 Inside the shop - I really looks as though the owner will be right back and looks like it needs a woman's touch to clean and straighten the place.  In the background is a child's barber seat complete with the pony head to keep your tyke happy and occupied with Don or one of the other barbers gives him his summer clipper cut. 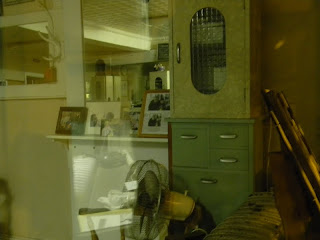 Fantastic old barber shop furniture.  I haven't seen anything like this since I was in my teenage years and I worked and cleaned an old barber shop in Southwest Philly.  We're talking more than 25 years ago. 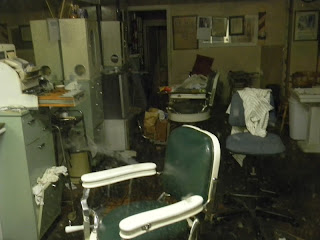 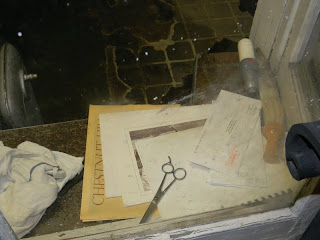 The scissors are ready, maybe in need of a quick cleaning and resharpening but there for the next fade cut. 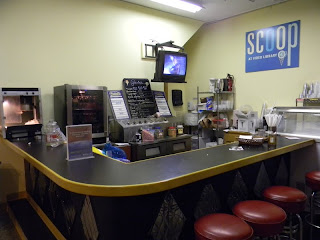 We might not have gotten much to eat for our dinners but we found ice cream!  You might think this ice cream shop had also stopped in time and had no customers.  It was a throw-back place but there were plenty of people behind me and milling about on the sides of this ice cream shop and video library.  I got lucky with the photo shot, making it look as though it were another time capsule business where the owner was temporarily indisposed.  He and the employees were only a few feet away scooping out Bassets' best ice cream.  Now this shop knew how to run a night market dessert event!  Seriously, I hope the next Night Market takes a cue from the one they ran this week, keep the music, spacious venue and the bonus tables and chairs and work on and with the food vendor's food service.  It's still a serious weakness and no amount of tweets, social media outlets and free Face Book ads are going to keep these events as successful as they should and could be.  Only an idiot would ignore working business models for public events.  There is a way to keep it cool and have it work.  Really.  - UPDATE: The next Night Market Event was just announced for Thursday, October 6th from 7 to 11 pm in Chinatown.  Really hope that they get their food act together so we can get more than a grain of rice and whiff of sesame oil and garlic.
Email Post
Labels: "Failure/Success" "Food Finds" "Philadelphia Sights" photos
Location: Philadelphia, PA, USA