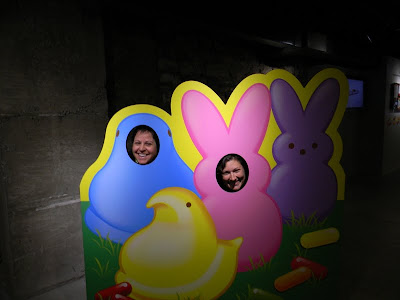 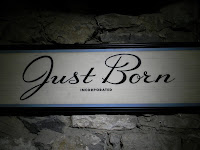 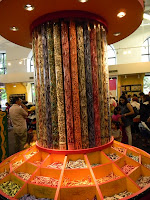 We're on a little road trip vacation this week, stopping first in the Lehigh Valley area to visit Liz's dad, Paul, and step-mother, Paula, and sister, Kate.  I had hoped to bike while we were here but there's been too much rain to get outside beyond running to the car.  Instead we've been doing mostly indoor things, such as going to the Sigal Museum in downtown Easton - an historical museum all about the Lehigh Valley with a strong emphasis on the history of Easton.  It's a well-planned museum, with easy to access exhibits and displays and some interactive, touch screens and sound bytes.  It's a must to see for those interested in the Civil War and early Americana of the area, as there are a lot of uniforms and artifacts from the 1800's.  There is also a whole area devoted to the candy companies founded in the area - such as the First Born Company, the makers of Marshmallow PEEPS!  Crayola is also another great company with head quarters and factories in the area and we made a quick visit there too. 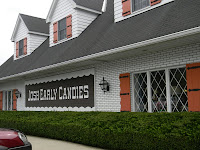 Whenever I learn about a great old candy store or "Shoppe" I have to find it and check it out for my own personal taste tour.  Josh Early Candies is in the Bethlehem and Allentown areas of the Lehigh Valley.  I've had the candies many times but had not visited the store.  This time we made a special drive over to the shoppe in Bethlehem.  It didn't disappoint.  The store looks as though it was built and decorated in 1963.  It's a huge ranch style building with an enormous show room floor filled with aisles, shelves and tables of chocolates, candied fruit slices, licorices and chocolate covered everything.  I went a little crazy in the store - it was before breakfast/lunch time and I was hungry.  We bought dark chocolate covered toasted coconut marshmallow fluff, dark chocolate non-parelills, cashew clusters, chocolate covered pretzels for some friends and fruit slices for another friend.  Just what I needed, candy to add to my "growing" waistline!  Ah, the food and eating mentality of vacation.  Too bad it's rained so much on this trip as I haven't biked away any of the calories I'm taking in on a daily basis. 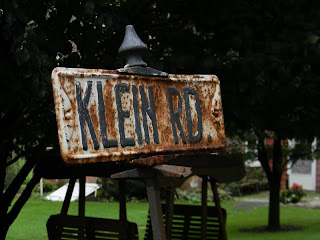 On another food and find stop, we visited Klein Farm in Easton, Forks Township. Liz's family has a connection to the Klein family and Liz always tells me the story of how her family would buy milk & eggs from the farm.  City "kid" that I am, I get a big kick out of the story and thinking about buying farm fresh produce and dairy products direct from the source up the road.

The Klein farm has recently become a bit more well-known outside of the area thanks in large part to a recent guest appearance on TLC's "The Cake Boss" reality baking television show. The family had a large scale replica of their special cow interpreted as a cake, well really as a giant life size rice crispy treat. The Cake Boss built the cow treat big enough to hold a small man inside, who dispensed chocolate milk through the "cow's" udders. 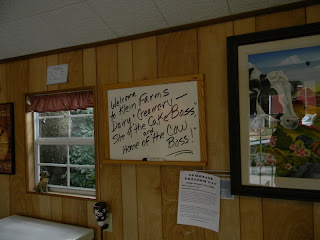 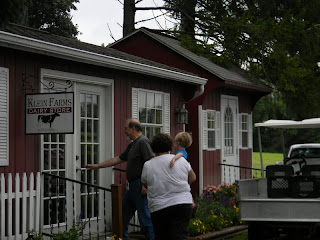 At the end of the episode the guests at the party tipped over the fake cow, with the little guy inside.  It was funnier on tv than in my retelling. 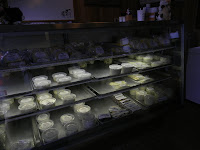 Visiting the farm was a lot of fun for us all.  Nate ran around and visited with the cows, chickens, goats, sheep, turkeys and ducks.  He even climbed aboard the farm's golf-cart that they use to drive out to the buildings and produce fields.  We bought some freshly made and aged cheeses and apple butter and I spoke to one of the farm workers about their produce and the collaborative for which they supply vegetables each week.  I might not have biked here but I finally got in my farm tour this summer, having missed one a few weeks ago in Philadelphia due to the severe heat wave.  The only weather issues we experienced was more rain a lot of thunder and lightening.
Our next stop is up to Hackettstown, New Jersey, to visit with Liz's college roommate, Lynnette and her family.  She's planning a Polish feast for us and if we're lucky, we'll explore some of the gres at byways and food finds of North-Central NJ.  Lynette's husband works for Mars, makers of M&M's.  I'm sure we'll get to taste some of the new candies, hopefully the new peanut butter Snicker's Bar!  And to help with my weight control, Lynnette's organized  bike ride for me with one of her friends, Tara, and avid cyclists.  I hope I'm up to the task of the hills of Central NJ.  This "city kid" is used to the flat street of Philadelphia.  Stay tuned for more tales and candy stories!
Email Post
Labels: "Food Finds" candy Summer vacations