In the Pursuit of Beer 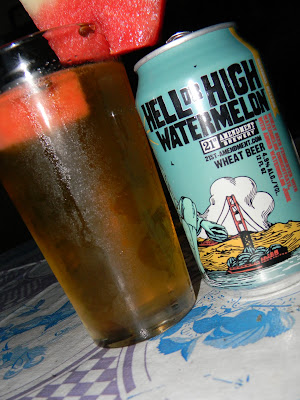 For a refreshing Summer find, I present to you - Watermelon Wheat Beer!  A few weeks ago, Liz and I discovered the joys of this fine libation at the South Philly Tap Room at 15th and Mifflin on Hicks Street.  The bar/restaurant is a find in and of itself - extensive beer and cider selection, full bar, and an amazing brunch menu.  Fried pickles, three cheese grilled cheese sandwiches, vegan tomato ale soup and a killer South Philly Cheesesteak Omelet.  It was a hot day and we sat outside with Nate in his stroller. A cool refreshing beer and cider were what we needed to whet our whistles.  On tap were many choices but the one that piqued our interest most was this wheat style ale with hints of watermelon.  It wasn't sweet but it had a hint of watermelon essence.  Totally refreshing, the perfect summer sip for beer lovers.  A week later, while were were up at Staten Island I went to the beer store to find something good and lo and behold, I found the watermelon beer - in cans! 21st Amendment Brewing Company out of San Francisco.  Normally I eschew beer in a can, lest it remind me of piss-excuse lagers of deli's and cheap take-out locations, but this stuff tastes great. And, according to the package, it ships better, the packaging is lighter, recycles easier and there's no light filtering through to spoil the beer.  I haven't looked around Philadelphia beyond the SPTR to see if other bottle shops and bars are selling/serving it so I can't tell you where to go find it, but do keep your eyes and taste buds open for a can or pint of this stuff.  It's so worth trying. 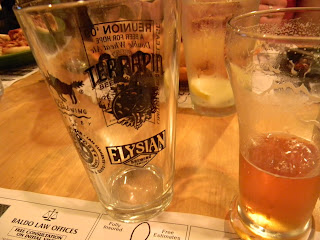 In other beer news, I have a friend, Colleen, who has founded a beer aficionados group called the West Chester Beer Ladies.  She lives in West Chester, PA and started a group for women out in that area to visit breweries and attend beer tastings and events.  They've been very successful and have been meeting on a regular basis for several months, mostly in and around Chester County and Delaware County.  The Beer Ladies have been invited to taste limited release brews at several area breweries and pubs; attended Beer Week Events and have received a fair amount of press coverage about their events and group. 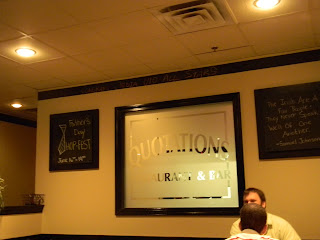 A week ago, the group met at Quotations Bar and Restaurant, in Media, PA (Delaware County),which is only 20 to 25 minutes outside of Philadelphia.  This is a far easier drive for us so we were able to attend - what with organizing a baby sitter and then driving out of the City to go have a beer.
It was Quotations annual Hop Fest week - so Colleen organized the meet-up in honor of the event.  When she got to the bar, the owner wasn't quite ready for the group and hadn't yet received all of the special beers slated to be on tap.  No matter, they had an extensive selection from which to choose, many beers from breweries in and around the tri-state area; most were from Pennsylvania.    The bar has a good menu - decent pub grub with a few twists on the fried and true bar favorites: chicken and grouper bites and shrimp parmigiana sandwiches; good burgers and a decent quesadilla.   The main reason to head to the bar, for us though, was to see our friend and meet up with some of the other Beer Ladies.  Enjoying some good beer and food as well as receiving some free pint glasses and free appetizers were joyful and tasty bonuses!

The outing was a lot of fun, making me think that I should start a similar group in Philadelphia, though I understand there is one already in existence.  My group, should I choose to organize it, would be a variation of The West Chester Beer Ladies and the old, Beer by Bike group I met a year or two ago.  I'd like to open the event/group up to other cyclists, ride to some breweries or pubs and include men and women.  Anyone interested? Summer's the best time for me - so perhaps we can try a meet up in July.  Email me at denine.thebicyclechef@gmail.com  or of course, leave a comment here and check out The Bicycle Chef's Facebook page.  If I get enough interested folks - say more than two of us, I'll do a ride to a local pub. 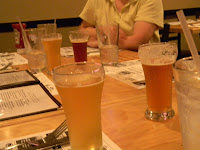 A variety of hoppy and local suds 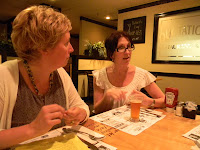 In the background, West Chester Beer Lady Founder, Colleen, with friend Brooke, in the foreground. 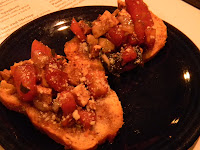 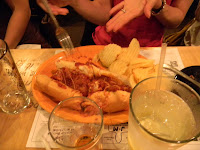 A twist on a parmigiana sandwich; Fried Shrimp in a zesty tomato sauce. 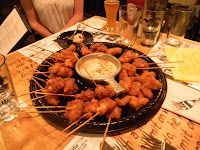