Getting my Grill on 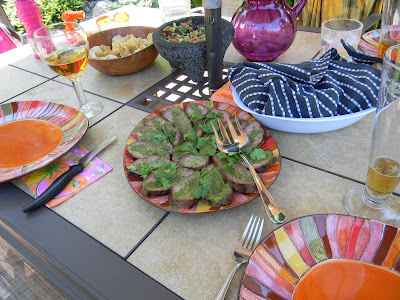 Once the hot weather lands in Philadelphia, or rather, once the cold, snow and rains stop, I try to cook and grill all of my meals outside.  After a while I either run out of gas (literally) or good grilling ideas.  The food tastes great but I don't get the same thrill from my grill mid-July that I did, say during the early merry month of May.  I need some new techniques, some new foods, something to cook in a way that I never had before.  And then I try some slightly different approach and the same old potato tastes new and interesting.  I decided to grill-roast garnet red sweet potatoes and instead of placing the sweet potato directly onto the grill, I roasted them in a foil packet.  Talk about a revelation!  These were a side dish and starch that could have doubled as a dessert or main course. Sweet, sugary caramelized lusciousness and simple to make. 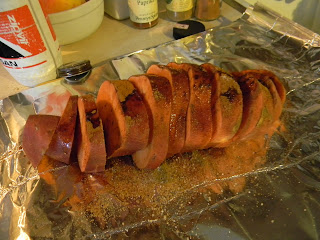 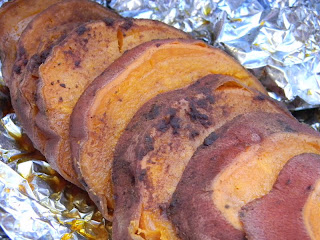 Caramelized Garnet Red Sweet Potatoes: Use 1 large sweet potato for every 2 people.  Slice the sweet potato into 1/2 inch thick slices.  Use heavy duty aluminum foil or two or three sheets laid on top of each other.  Sprinkle the all sweet potato slices with a tablespoon of smoked paprika, 1/2 tablespoon of cumin and a tablespoon of cinnamon.  Drizzle with a tablespoon of olive oil and season with a generous pinch of salt and several grinds of freshly ground pepper  Seal foil packet tightly and place onto a preheated grill, rotating the packet from side to side and upside down.  Cook for half an hour or up to 45 minutes on the cooler side or warming rack of the grill.  Carefully open the packet to release the steam. 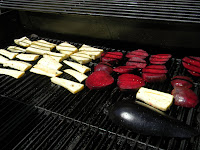 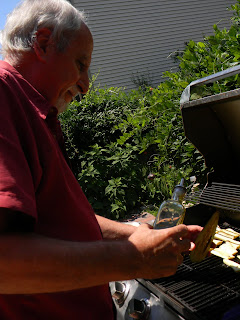 We went to a friend's house for brunch over the weekend, and he grilled some vegetables to go along with the filet he made for us.  I love it when friends cook for me and I learn a new technique or think about cooking foods in new ways.  Ennio inspired me to try out new herbs and to simplifying my cooking methods.  The meal he made for us was colorful and filling.  I can see the appeal of going meatless more often when you cook a wider variety of vegetables and make them just a bit more flavorful by using more than just oil, salt and pepper when you grill them. 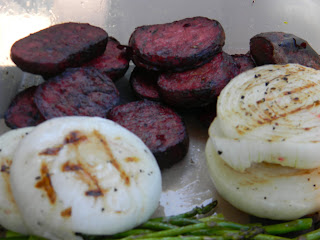 Ennio made a simple marinade of olive oil, fresh herbs — parsley, oregano and cilantro, salt and pepper for slices of fresh beets, eggplant, onions and parsnips.  I often cook eggplant and onions but rarely do I think to marinated them, not because I don't want to it's more because I just never think about doing it!  I have never considered grilling beets or parsnips.  It was like eating these vegetables for the first time.  Both the beets and parsnips take on a sweetness when roasted.  Grill them and they take on a unique  smokey flavor dimension from the natural sugars that char on the grill. 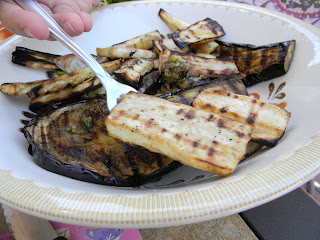 TO COOK: The vegetables should be sliced thick - 1/2 inch or so and cooked on a medium hot grill, turning and moving every few minutes to keep them from burning.  Most of the vegetables will take about 15 minutes to cook.  They are done when they are knife tender and have nice grill marks on both sides. 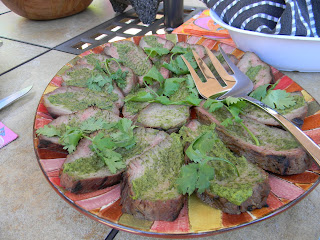 I don't think I'm quite ready to relinquish my carnivore card but it's tempting...Until I cut into the butter tender filet Ennio made — topped with a sauce of cilantro, parsley, garlic and something acidic like lemon, lime or a dash of vinegar.  It was a cross between a Cuban Mojo Sauce, Argentinian Chimchuri sauce with a touch of something Italian thrown in for good measure.  Good thing I filled my plate with all of the delicious grilled vegetables otherwise this platter of meat may have become my plate!  This will most definitely make an encore appearance at my house soon though. It was pre cooked and served at room temperature.  It would also be good cold, especially with the sauce.
Email Post
Labels: beef grilling Summer sweetpotato vegetables