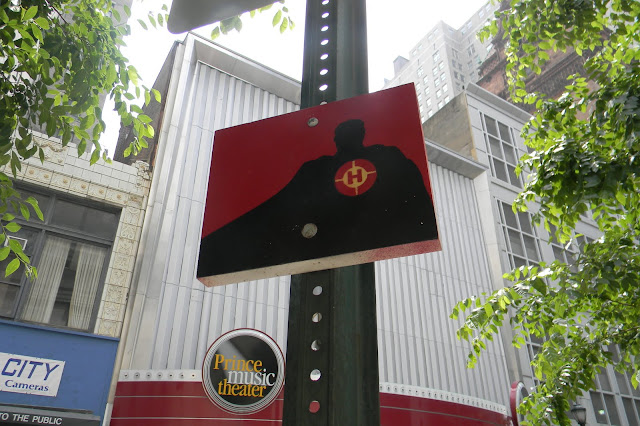 I almost always carry my camera with me as I never know what cool street art, sight or people I might see as I wander around Center City.    About a week or so ago, I walked down Chestnut Street from 18th Street towards Macy's at 13th Street.  As I walked along this very busy commercial thoroughfare, my eyes were drawn to all the changes and interesting things there are on Chestnut street - new buildings, old architectural details, countless bits of street art, graffiti and stickers. As I approached Broad Street, I began to look at the Prince Music Theater, a former movie house and live musical theater venue.  I used to work for this company, in the mid to late 1990's.  In 1995,  when I worked for the theater, it was called The American Music Theater Festival (AMTF).  The company bought this building and renovated it from 1997 to 1998, when it opened.  It was never a successful company; some people feel that  it was too innovative and ahead of it's time.  Others, such as myself, know that it was run by a wildly inconsistent megalomaniac who couldn't and wouldn't listen to calm and rational voices and ideas.  I wanted to take some photos of the marque, as the theater is nearly dark now.  I think the place may be open now and then for movie screenings, but live musical theater and cabaret acts have stopped.  It's a shame because the space is great and there isn't a bad seat in the entire house.
I never imagined that I would find a street art installation by an artist known as Dash.  I've been documenting his work for a few years now.  I must have over 25 photos of his art; one piece was even done for me, though we've never officially met - we just "know" each other's work via our photo server on Flickr.  I wrote about the piece Dash did for me a year ago.  You can see that photo and post via this link.
The more I think about this find, the photo I took, and the Prince Music Theater in the background, the more I realize how perfect the composition and title are. It saddens me to know that this movie house/theater has nearly closed and gone dark because of the mania and incompetence of the woman who ran the business, literally into the ground. It was a crazy company to work for - and I understand it got far worse as the years went by.  Since the theater is nearly "dark" now the name that I chose to call this photo fits on so many levels.  I caught the building, the artwork and the scene in the cross-hairs of Dash's work.
Email Post
Labels: "Found Objects" photos StreetArt