Riding my bike in Staten Island 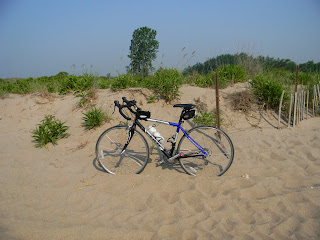 We spent a mini-vacation in Staten Island last week, visiting family, enjoying the sights and taking in the offerings of New York's forgotten borough.  Over the course of 3 days and 4 nights, we traveled nearly the length of the Island, mostly by car, but I pedaled along the coastal byways too.  Staten Island gets a bad rap — think the ferry scene in the movie Working Girl, or in any one of TV's Reality shows such as,  Mob Wives, House Wives of New York/New Jersey, or even from an episode of Sex and the City.  It's unfair because the Island has a lot of great amenities to offer New Yorkers and northern New Jersey dwellers.  It's only an hour and a half drive from my house to the neighborhood of Great Kills, and in another hour I can be in Manhattan via the subway and ferry systems.  My first time biking through Staten Island was in 2008, during my first NY 5 Boro Bike Tour.  On that ride, after it was over but before I boarded the ferry back to the big island of NYC, we had to ride through Fort Wadsworth, along the river coast line and through the neighborhoods of the coast guard and naval bases.  I thought then that it was a neat little beachy town and I wanted to return someday to explore it further by bike.  My 2010 5 Boro Tour didn't afford me much of an opportunity to  explore the area.  Having a family member live in Staten Island has finally given me the chance to see first hand just how much of a sleepy beach town it is. 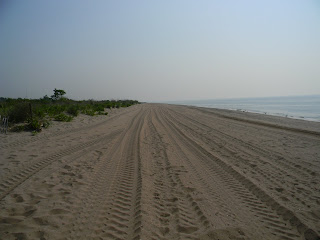 This is a photo of the beach, taken near or in the area of Great Kills, which is the South end of the island. The beach/shore line is in a National Park, filled with biking, jogging and roller blade lanes.  On one side is the beach along the river side, the other has the bay and marinas; in between are dunes, protected grasslands and a bit of woodsy area too.  I trekked down to the beach, which was mostly deserted and found an odd assortment of the remains of dead animals — large fish skeletons and a dead sea bird or duck.  This isn't to say that the beach is littered with carcases, though one never knows what will wash up on the shore - it is after all the great landfill area and dumping ground for TV mobster fantasies like the Sopranos and Boardwalk Empire. A notable finds that I was happy to discover was the mother lode of sea glass all along this shoreline. I found huge pieces of well worn glass in a variety of colours, from the basic and run of the mill brown, green and clear, to rarer and large pieces of dark green, light green and coke bottle shaped and colour green. 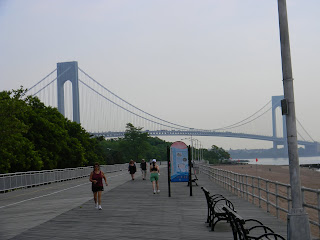 About four or five miles away from where we stay is a board walk along the beach that has a great view of the Verrazanno Bridge.  During my first ride along the boardwalk, the bridge was nearly invisible due to severe haze.  The second day revealed the whole bridge before me.  The entire board walk is about 3 miles, though there is a mile or two more of walk way before the board walk begins.  The whole five mile stretch, along Father Capodanno Boulevard has places to park your car, bathrooms, water fountains, play ares for the kids, tennis, basketball and soccer courts and fields.  Plus there are cafes, ice cream stands and a number of food trucks.  In season, there's even a beach club with cabanas, chairs and decking laid out on the sand. 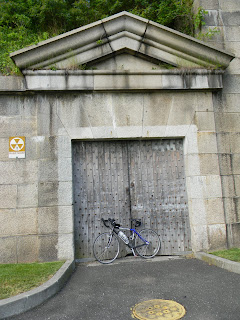 I biked an area that joins the boardwalk trail and winds through a wooded area and ends at Fort Wadsworth.  There are several forts along the coast of New York City, and in Staten Island, at the base of the Verrazanno Bridge are two or three forts, where the National and Coastal Guards are still on active duty.  While this door way may look old and abandoned, don't let its weathered facade and fall-out shelter sign fool you. Inside these doors is a bustling workplace. 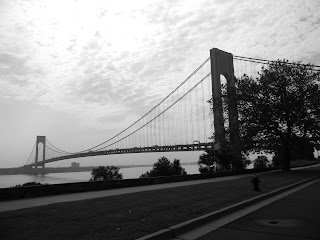 A car-free unobstructed view of the magnificent Verrazanno Bridge
- from the road along Fort Wadsworth. 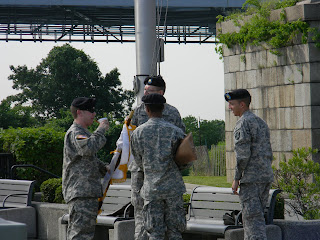 The Guard raising the Fort's flags for the day. 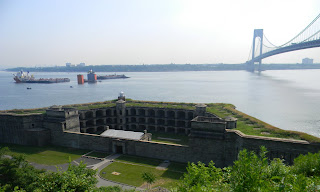 This is the original Fort Wadsworth,
used in 1776 by the Revolutionary Navy to protect NYC from the British Navy invasion.
My vantage point is above the fort, several hundred yards (at least) away from the lower fort along the river. 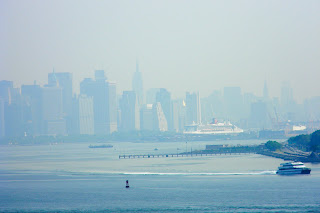 New York City, as seen in the fog and haze, from Fort Wadsworth in Staten Island. 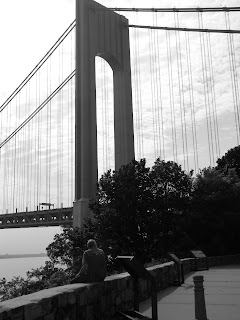