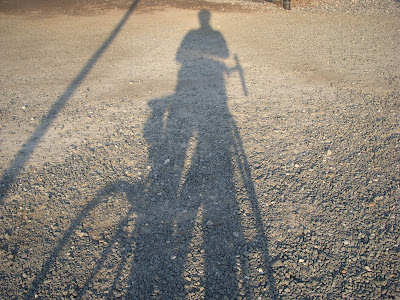 We started our 2011 biking season a bit late this year.  I was hoping for some March riding, but the weather hardly cooperated all month.  It rained, nearly snowed and was in general, cold, dark and miserable during March.  In like a Lion and out like a Grouchy Bear.  April 1st became my next start date and that day came and went.  I believe we started our first ride on April 11 - only two of the SueCrew out on the road for the first two weeks, Aaron, aka A Boy Named Sue, and I, Sous Chef.  The Original Sue, Aaron's fiance, is injured.  "Sue"-Ellen came along two weeks later.  Susan Hill joins me once a week or so, but only if I go later in the morning.  We've added another rider to our pack, Carrie-"Sue".  She's one of my mentees from last year's SheRox Triathlon.  She's an excellent rider and good athlete.  If and when the whole pack comes out to ride together, we'll make a motley crew of riders, a deep 6 pack of cyclists.  I think we need our own tech shirts or jerseys to complete the look. 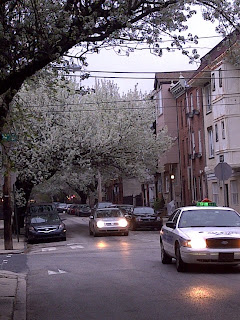 The first few rides were started later in the mornings, closer to 7:30 am than our usual 6:30 am start.  Aaron and I didn't see any of our morning "regulars" out on the Schuylkill River loop.  I look forward to spotting the runners, cyclists, walkers and skippers we see each morning.  These are the folks we've been spotting over the last three years, and we've affectionately given most of the more colorful or recognizable people funny monikers: Skipper - the dread-locked woman who hops and skips along Kelly Drive.  The Pirate - a middle-aged African American man who always wears a bandanna.  The Old Turtle - a really old man who teeter-rides a folding bike slowly along the river. He's old, looks too frail to barely able to hold up his small bike, and yet he rides the entire loop, slow and steady like some old tortoise. 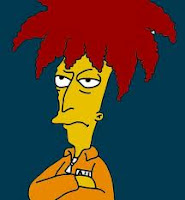 One of the more unusual cyclists on our morning route is  a woman we've christened Side Show Barb - a very bizarre woman who we see at different intervals during our rides.  "Barb" is tall and lanky with a shock of frizzy hair that sticks out of her helmet - like Side Show Bob's hair, and she's always scowling at us with barely much acknowledgement of any of us, even though we see her on every morning ride.   One morning a few seasons ago, "Barb" rode in-between Sue K. and I on the bike path up to the Art Museum.  Sue  K. and I were about 2 feet apart and Side Show came riding in the gap, not saying a word, not asking us to move.  I turned to her, said hello and asked if she was joining our crew.  I think I got a grunt out of her and that was about it.  After three years, I notice she's making eye contact but not much else.

There's George, aka, Guy Smiley - the happiest cyclist on the road, who we've actually come to know.  He rides a different bike  each morning and it too us a year to be sure he was the same guy we were seeing.  He finally became familiar to us by his Pink Tour Du France Jersey and because he introduced himself to us one morning at the end of a ride.  I guess he was as curious about our pack as we were about him.

There's the duo walkers, two older gentleman who we usually pass as we are coming down West River Drive from Strawberry Mansion Bridge when we cross it at 7:05 am.  The Cute Runner - a very cute girl with short, dark auburn hair.  Towards the middle of last season, we spotted her biking.  She must have been training for a triathlon.  She's a good runner but looked awkward on the bike.  She's meant to be a runner just as I am meant to be a cyclist.  During this week's ride, Cute Runner and the Duo were walking along together, talking.  Since two different elements of my world came together, I felt I could finally talk to the trio.  We all shared a quick laugh at all of us "regulars" coming together and co-mingling. 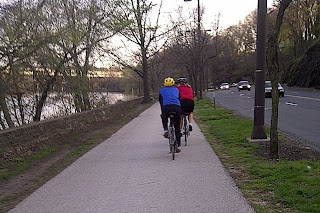 This week, I rode 4 times - a personal best so far!  Finally got to the double loop stage, huffing and puffing my way around the Schuylkill river twice - up Kelly, down West/Martin Luther and then back up West/Martin Luther Drive and down Kelly Drive again and back past the Boat Houses.  That's 24 miles round trip for me.  Sue S. likes to say if you're getting up so early you might as well make it worth while! I'm not so sure I'm in shape to do the full 24 miles - the extra 8 miles around the river is killing my knees and lungs.  I don't have the cardio lung capacity yet and my stamina is not what it should be or was.  I'm trying to be kind to myself and make this a better riding season.  My neighbor and friend, Michele, told me I should just let this be my determination to get back into shape and make it a great season.  Since I've only had 2 double loop rides so far, I'm skeptical that I'll get where I want to be physically, but I know eventually, the cardio will come back, just as my muscle tone returns.

Since we started to do the longer rides, we've headed out earlier too, starting our meet up at 6:30.  First day out at the regular time, we saw almost every regular I mentioned above, plus a few more that I've seen but haven't given nicknames to (yet!)  Carrie"Sue" got indoctrinated quickly on who's who out there, as well as having the challenge of riding a fast pace.  Here I am coordinating the morning rides and I'm the one half a mile behind the pack, barely able to keep up a 13 mile an hour pace.  I'll get there, I hope, but man, it's hard to just enjoy the ride.  Thankfully, I have a good crew to keep the motivation going. 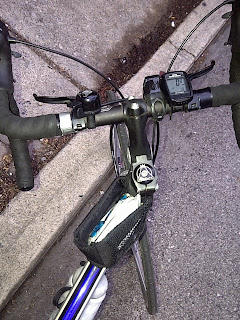