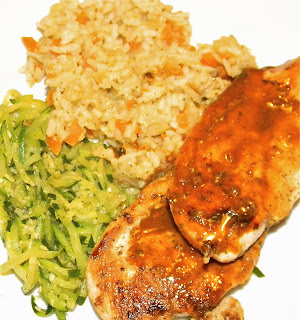 CONTEST UPDATE! - Contest info first.  I have several samples of the products I'm reviewing in this post, as well as a few other items I would love to share with you.  I ask that you do a few things: Read this post; comment on it and either LIKE my Facebook page, The Bicycle Chef and/or Follow this Blog.  Read on to the details below.  I promise, I'll select a random person and send out the goodies "toot sweet".  Now onto the post and reviews...

Last week was a veritable smorgasbord of food finds for The Bicycle Chef.  FoodBuzz, the lovely sponsor of The Bicycle Chef, sent a few items to the "Tastemakers," aka, bloggers who blog about food and products, for us to try.  I received sample packages of a new dip mix by Tostito's and Lays called Dip Creations, in three very tasty flavors: Country Ranch Seasoning Mix, Freshly Made Guacamole and Garden Onion Seasoning Mix.  A few days later I received a box of Uncle Ben's Whole Grain White Rice.  The next day I received a coupon for Tyson's Grilled Chicken.  Too bad I didn't have the coupon with me when I went to the grocery earlier, I truly could have made my entire dinner courtesy of FoodBuzz and their sponsors.  Using the items I did have allowed me to make an entire meal around the products I received adding in chicken breasts that I already in the refrigerator. 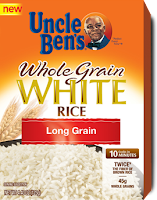 As my readers know, I prefer to not use pre-made products.  Semi-half-assed, Semi-Homemade cooking is not my style  and I rarely make a dish that I don't embellish with my own special blend of Bicycle Chef-magic.  I enjoy reworking a products and recipes to see how I can make it my own.  Case in point — the box of Uncle Ben's Rice.  I wanted to stretch what I had and amp it up with some vegetables.
I almost always use brown rice.  Occasionally I will buy a bag of Vietnamese White Broken Rice, but typically the rice in my cupboard is brown — untouched, unbleached and full of whole-grain nutty goodness.  So, I gamely decided to make a rice pilaf.  I sauteed finely diced onions and carrots in a bit of olive oil and then sprinkled in some of the Tostito's/Lay's Garden Onion Dip Creation, to flavor the cooking water.  The riced cooked quickly and evenly and each grain was separate.  The Dip Creation added a lot of flavor and the addition of carrots and onions helped increase the volume of the rice and added in an extra vegetable to the meal.  Over-all, the rice was fair.  I found it to be too soft, as I am used to a more al dente style rice — rice with some bite and texture.  I will concede that people who prefer white, non-nutritious rice, may enjoy this product.  There are 4 grams of fiber per serving, very little fat and the calories are fine - 170 per cooked cup of rice (as prepared according to the package directions).  I don't mind Uncle Ben's rice — it cooks up foolproof every time.  It just wasn't the right rice for me.  My adult family dining companions weren't too impressed with it either, but our 18 month old toddler, Nate, loves it.
The Country Ranch Dip Creation Mix was used to flavor a saute of julienned zucchini.  The dip mix tasted great and worked perfectly in the vegetable saute.  All that was needed was a non-stick skillet, several julienned zucchini, a tablespoon of olive oil and two tablespoons of the Tostitos's Country Ranch Dip Creations mix, sprinkled onto the sauteed zucchini once it was cooked through.  This was a tasty hit at dinner. 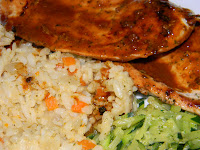 The remaining Tostito's Garden Onion Dip Creations seasoning was used to flavor thinly sliced chicken breasts and make a pan sauce for the sauteed chicken breasts.
Here's where the Dip Creation worked best.  I seasoned each chicken breast with freshly ground black pepper, olive oil, white wine and two tablespoons of the Dip Creation mixture.  Then I heated some olive oil in a non-stick skillet and seared each breast until they were golden brown and caramelized — about 5 minutes on the first side and 3 to 4 minutes on the second side.  After I cooked all the chicken, I set it aside and covered them.  In the same skillet, I sauteed a few sliced onions in a bit more olive oil, then I poured in a cup and a half of a dry white wine and reduced it down by half.  I poured in a 1/4 cup of orange juice, whisked in the remaining Garden Onion  Dip Creation mix (there was about 2 tablespoons left) and I also whisked in two tablespoons of Dijon Mustard, stirring thoroughly to combine all the ingredients.  I brought the sauce to a boil, and then immediately reduced the heat just to tighten the mixture.  The combination of the Dip Creation and the mustard made the pan sauce creamy without adding any added fat, butter or cream.  Everyone at dinner was in agreement, the chicken was very flavorful and the pan sauce was fantastic.
The food find consensus — the Tostito's seasoning mixes are worth seeking out.  A decent product to keep in the spice cabinet, they will come in handy to make dips, sauces, flavor vegetables, meat, fish and tofu, or even rice dishes.  I could see that they would work well in home-made vinaigrette.  The Freshly Made Guacamole seasoning mix worked great in seasoning kidney beans and sauteed tilapia for a fish taco Mexican dinner I made a few nights later.   If you have finicky eaters who won't eat brown rice, then The Uncle Ben's Whole Grain White Rice might be the product for you.
And now for a little contest details - I have extra packets of the Tostito's Dip Creations, an apron that I received from FoodBuzz, and some other goodies I am going to send to a random commentor.   1) Comment on this blog post — nothing too Earth shattering, just a comment acknowledging you read this post, and/or your thoughts or ideas.  And 2) Follow this blog — by clicking over on the top right-hand area where it says,

Ride along with The Bicycle Chef - FOLLOW ME HERE!

OR 3) Go to The Bicycle Chef's Facebook page and become a fan.
1-2-3 or Two-Six Quick.  I will randomly pick whoever does all three things, comments, follows and likes the Facebook page will get the products.  No fooling!
Email Post
Labels: "Cooking Tips" "Food Buzz" "Food Finds" chicken rice vegetables