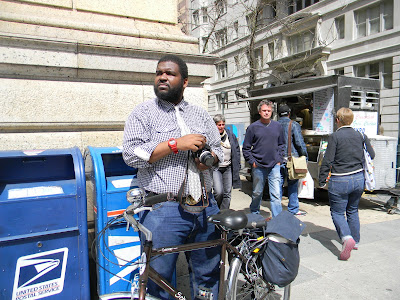 In honor of my 300th post, I'm sharing an encounter I recently had that's positively impacted on my artistic vision.  About a week ago I was taking my usual walk around Rittenhouse Square.  I had my camera out, ready to shoot whatever Street Art, tree sweaters/yarn-bombing/knit-bombers or odd-ball things I could find.  I was planning on taking a photo of myself holding one of my photos of a tree sweater, against the tree that's been stripped of its sweater.  It's an idea I've seen on one of my Flickr photo contacts — kind of a conceit of "Things that aren't there anymore," or holding an object in your hand that would normally be impossible to do in reality.  My other task was to find a few of the bicycle couriers that I've photographed in the past and give them their photo on one of my Mini Moo Photo business cards.  Neither project came to fruition as I was happily distracted by a Brown Schwinn and another camera; I met a very interesting man and found a kindred creative spirit. 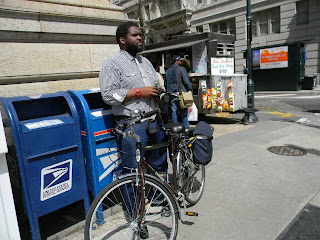 It was Reuben's bike that I spotted first, a sweet collegiate style brown Schwinn. I have a thing for old bikes, especially Schwinn bicycles. His bicycle is a new but looks like a cool retro ride. The conversation started off with my complimenting him on his bicycle choice and then I noticed that he was holding camera.  From there the conversation rolled from one shared topic to another.  I told Reuben that had I seen this bike instead of the one I currently own, I would have bought it. He told me he bought it at Via Bicycles on south 9th Street, do I know that shop? Do I? Curtis, owner of Via Bicycles is an old buddy of mine. I've been buying bikes and bicycle accessories from him for decades!  After we chatted about our love of old bikes, I realized he too was taking photos of the happenings on Rittenhouse Square. We talked about street art, bicycle couriers, photography, coffee and old signage around Philadelphia. We discovered we have a lot of common photography interests. Within a few minutes I felt as though I found a kindred spirit.  Reuben is a Street Fashion Photographer, a chronicler of fashion trends in Philly.  He's the reason that Mitchell and Ness Nostalgia Company is as huge as it is, and has been featured in Philadelphia Style Magazine. He's a columnist for The Daily News and he has blog called, Street Gazing, though I learned all this after we met.  Reuben is very a gracious and unassuming artist. Our chit chat turned to inspiration and other photographers and artists we like.  Reuben told me about one of his photography idols, Bill Cunningham, the famous Street Fashion Photographer for the New York Times.  Cunningham rides a bike around New York City and takes hundreds of fashion photos every week.  To have been a subject of Mr. Cunningham's lens is one way to have "made it in New York."   There is a documentary that's been made about Bill Cunningham and his work.  I was really jazzed up talking with Reuben and we connected on many levels, all in the span of five to ten minutes. I had no idea that meeting a stranger on the street would change my artistic vision in so short amount of time.  As we were talking, Reuben was snapping his camera and taking photos of all the people walking by us on 18th and Walnut Streets.  He's taking photos of me talking to him while I'm taking his portrait, like a pair of dueling photographers.  Within moments of our meeting, I start noticing people, the fashions and attitudes on the street.  Suddenly it's as though someone has traded out my Ray Bans and put a new pair of specs over my eyes; I'm seeing the City in totally different way.  Prior to talking with Reuben, my photography was focused on street art, odd findings and old buildings.  Now I'm noticing the fashion life that is living and moving all around me.  Thanks, Reuben, aka BigRube, for the new sights your camera showed me.  After researching you and your photography online, I discovered your connections to all things hip and happening in Philadelphia.  I think you are the modern and urban Bill Cunningham of Philadelphia.

Here are a few of the photos that I took immediately after my meeting Reuben. 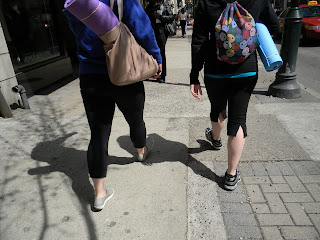 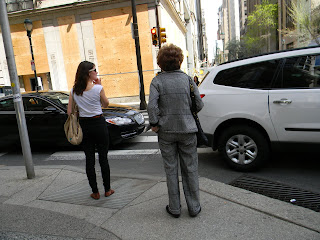 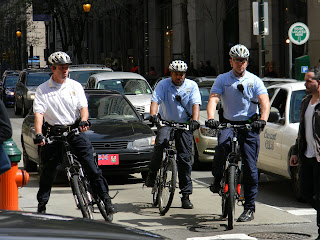 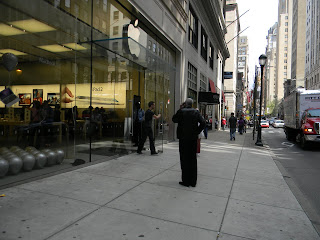 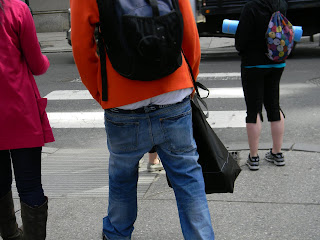 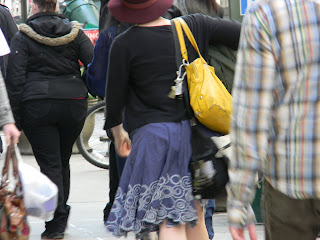 It's in her bag 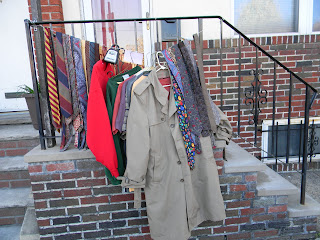