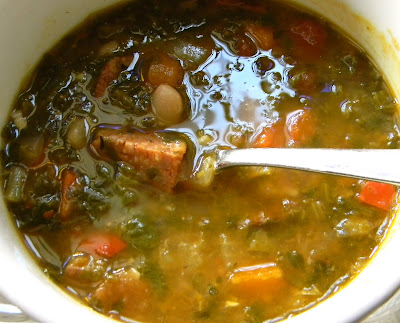 Another Lenten Soup Special and a "confession" — this soup is not exactly Bicycle Chef sanctioned.  Oh, it's good — too good; the soup is intensely meaty, rich and flavorful, but it's not on my low-fat, low-sodium healthy meal plan.  I think I went too over-board on vegetarian menu with last week's puree of carrot, sweet potato and ginger soup for the Lenten Soup Special at my church.  I was cooking for myself and neglected to consider the people who were eating the soup.  They wanted all the butter, cream and salt that the soup could hold.  Oh well, live, study and learn.  Pastor Hawkinson suggested a sausage soup for this week's Lenten study session.  Can't say that I ever had such a soup before but few ideas came into my mind. After a quick recipe search on the Internet, I decided to concoct this recipe.  While the group eating the soup would be virtuously studying the Lenten Cannon of the Bible and not necessarily eating virtuously, I went the full-fat route.  The recipe reflects the use of those ingredients.  To lower the fat and sodium I suggest substituting the pork sausages I used with turkey sausage; swap out the chicken broth (which was low-sodium) with either vegetable stock or water.  There are plenty of vegetables in this soup, you will only need to increase the seasonings — using more Italian Seasonings - oregano, basil, thyme, parsley and red pepper flakes to round out the flavors.  Salt may not be necessary, as the canned goods will have plenty — regardless of being labeled low or no-sodium.  Taste and adjust the seasonings as you go along.
White Bean and Sausage Soup Ingredients: