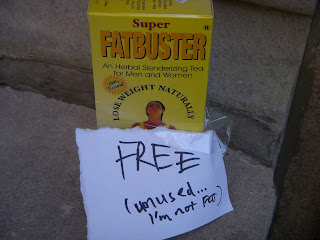 I did two things tonight that I haven't done in a long time.  I went back to the gym for the first time in over 3 months and I watched the Biggest Loser, season 11 premier episode.  I've been lax about getting to the gym and have not ridden my road bike since October 1st.  I still ride to work almost every day, only the snow and ice stopped me from riding.  Still, it's not nearly enough exercise and I've been feeling logy and blue, in large part because I haven't been working out and getting the endorphin high to which I became accustomed over the past few years.  It's not that I haven't wanted to go to the gym, I love working out, lifting weights and lord knows I love to bike.  I am too lazy and tired in the early morning to wake up early and go to the gym and I just haven't figured out an evening schedule that works for all of us - the family and our babysitter.  The adjustment to our lives continues to be a challenge and my guilt at not spending enough time with Nate in the evenings before he goes to sleep has been a heavy burden on me.  So much so that I feel depressed and out of sorts.  Not a good recipe for being a happy parent and partner.
So I went to the gym and started anew, just like everyone else is doing right now for the start of the new year.  I guess I needed to hit my new rock bottom to find my inspiration and drive again.  As difficult as it was to not work out super hard, I listened to my body and not my ego and started out slowly.  2 sets of 10 reps on my weight lifting machines, using less than 30 pounds on most machines.  I used 3 pound hand weights for my upper arm workout, the lightest amount I've ever lifted since I started the whole work-out routine.  I feel sore now and my 1 mile treadmill run felt like my first run ever; it took me over 15 minutes to do the mile - a new low considering that at best I run a 12 minute mile.  By the time I got home, Nate was still up and I had about half an hour with him before I rocked him to sleep.  Double yeah!  I worked out and had a small amount of quality time with my Nibblet.  I feel great!  Not as loopy as the highest endorphin high I've had,  it's more like a nice steady warm buzz.

As for my television viewing, The Biggest Loser is a show that I've watched at the gym from time to time or would flip back and forth to on occasion at home.  Tonight's season premier showcased 11 couples, and one in particular was a former gold medal Olympic Grecco Roman Wrestler from the 2000 Olympics.  As corny and prescribed as this show has become there are still moments when it just gets to me.  In my most cold moments I have felt that what's the big deal about celebrating weight loss?  I was fat  and I did something about it and well, I was fat.  Yeah, it's been hard work and yeah, I've been down on myself for the past six months or so about having lost so much of my muscle tone and physique. I forget what it was like to work hard and to feel like the weight will never come off, that the first 10%, or that first 20 pounds is an impossible goal to reach.  There was a scene tonight with the heaviest man on the show who weighs over 500 pounds, where he feels like the amount of weight he has to lose, which is nearly equal to his dad, is IMPOSSIBLE.  The trainer tells him not to think about that, concentrate on today, on moving right now and not to think about the numbers, because if he gets that in his brain he'll never get to his goal.  And that's when it hit me - that I used to think about just getting through to the next day, that's how I lost the weight.  Not thinking about the grand total but just about doing what I could today because if I was lucky, I'd get to the next day and then the next week and month and with any luck, I would have lost weight along the way.

It worked.  I lost over 60 pounds.  That's more than this bag of carrots! At my best moment, the weight loss was closer to 75 pounds.  But 4 years in and I'm still proud to say that I've lost over 60 pounds and I'm still a size 12.  My middle may be pouchier than ever and my arms aren't as toned but I've managed to keep myself from ballooning past 170 pounds and far below the 230 pounds (YES! That's how much I weighed) at my heaviest point in my life.
Inspiration comes in the oddest of places and from people that you might not even know.  I'd like to get back to my peak again.  I might not reach it but I don't want to give up on myself.  Four years ago I never thought I'd be a slim person, who has done three sprint triathlons and biked over 1700 miles in 2010 on my road bike - with no one ride over 50 miles last year!  Not too shabby or flabby.  No resolutions this year, just some small goals to do more, try to get to the gym before my riding season begins in March/April and to be kinder to myself.
Email Post
Labels: "Failure/Success" biking depression determination inspiration triathlon weightwatchers