It's not a New Year without the annual, Running of the Suitcase!  What a great way to start off New Year's Eve. 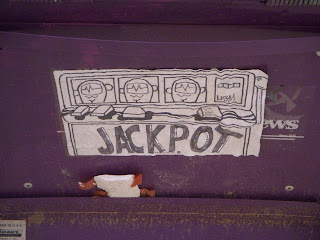 c) richer or poorer? poorer - I'm earning a wee bit less and paying more for insurance (yeah, thank's for the health care breaks America!)
18. What do you wish you’d done more of? Personal and altruistic: spent more time with Nate and Liz; selfish: slept, worked out more, biked; had fun more fun - in that I wish I could have enjoyed the every day moments instead of lamenting silently to myself about what I might be missing.  Shades of my mother! YIKES!
19. What do you wish you’d done less of? been selfish, temperamental and moody, and watched less tv.
20. How did you spend Christmas? Christmas eve - at Church for Liz's marathon night of services. Spent the evening in the nursery, in the cool, dark night with Nate.  I put him to sleep around 8:15.  I found a lantern and sat in the nursery with him.  I could hear the Choir rehearsing and then at 9 pm, I could hear some of the singing from the Church sanctuary. After the 9 pm service, I heard the choir rehearse again and by 11 pm, I heard the trumpet solo and singing again.  In between I sat and read by lantern light and huddled under a coat to keep warm.  It was the most peaceful night I've had in years, unconnected to media, tv, or computer.  I read, listened and just took in the night.  Bliss.
Christmas day was busy! the morning I was at home with Liz and Nate. Then I went to visit my 90 year old grandmother; picked up friends from the airport.  Dinner at home with our friend, Dana.  Good friends, Donald and Steven came by for a late night drink.
We spent the day after Christmas visiting our family.  The whole family came together at Liz's dad's house.  The two boys, Liz's siblings, her parents and their spouses.  Managed chaos and lot's of toys for the boys, great food and wonderful company.
21. Did you fall in love in 2010? Feh. No, I actually fell more in love with being a parent and with my darling boy Nate.
22. What was your favorite TV program? Boardwalk Empire on HBO.
23. Do you hate anyone now that you didn’t hate this time last year? Oh boy, what a loaded question! Of course I do! But the answer I'll share is, once again, I'm really disappointed by the behavior of some people who should be close to me, like my family (of which I have so little of my own); I hate most politicians.  I'm trying hard to forgive and move on from the hurts that I feel have befallen me by others.  I read a blog post on ZerotoSixty, written by an acquaintance I know named, Barbara. She wrote about her mother, forgiveness and letting go of grudges.  I heard a similar essay by Ben Stein, letting go of psychic hurts and baggage, to free yourself and move on in life.  I'm no good at either.  I can hold a grudge for a lifetime and I NEVER FORGET a hurt, a snarky comment or an insult.  I'm trying to let them go and forgive but as for forgetting, that's a tall order.


24. What was the best book you read? Books, those are those paper things that have a lot of words inside that don't move?  How is it that I read so little this past year that I can't even think of any book I picked up let alone opened?  I barely read magazines this year.  I blame it on the first year with a new baby.
25. What was your greatest musical discovery? Shelby Lynn.  Not really a new discovery, but a rediscovery of this amazing soulful talent.
26. What did you want and get? Adoption papers for Nate! A new cellphone.  A new car.

27. What did you want and not get? Validation.
28. What was your favorite film of this year? Haven't been to a movie in over a year and a half.  As for rentals, nothing stands out.  Bought Sex and the City 2 - because I love the series, but the movie was awful, in that I can't believe I'm watching this and I paid to keep it!  We watched The Kids are Alright.  I didn't like or love it, but I've thought about it for weeks.  I found it to be contrived, harsh and stereotypical.  But still there were some kernels of truth in it that just got under my skin.  The only movie I really liked this year that I saw, and it's last year's movie, was The Blind Side.  Perfect movie for Sandra Bullock, I thought she was lovely and amazing, funny and strong.  I want Nate to grow up to be like the little boy, SJ,  and I'd like to foster several youngsters and see them grow into determined, stable and well-cared for people.
29. What did you do on your birthday, and how old were you? Turned 43. We hired the baby sitter to stay with our now 5 month old son and we went to James - a very good nouvelle cuisine for the Millennium restaurant near the Italian Market. It was our first big night out, with spirits, great food and a lovely dining atmosphere.
30. What one thing would have made your year immeasurably more satisfying? Knowing for real what it takes to raise a baby, work full-time, be a loving partner and trusting your instincts.
31. How would you describe your personal fashion concept in 2010? Whatever didn't have spit-up or formula on it, and didn't need to be ironed, easy carefree and just this side of not being frumpy.
32. What kept you sane? Morning bike rides from April to September. Nate's smile.
33. Which celebrity/public figure did you fancy the most? Enough already with the stupid questions.  I barely like myself at times.  I did see Jennifer Hudson on tv, shilling for Weight Watchers. She looks good, damn good.  So maybe her?

34. What political issue stirred you the most? Health care reform.  I'm for it, but I'm not convinced it's going to work, last, or be helpful.
35. Who did you miss? Our friends who live in other states; Rachel, Steven, Donald, Jenny (even though we see her at least once a month); our family who we don't see often enough.
36. Tell us a valuable life lesson you learned in 2010: Housework doesn't matter, don't worry about the dishes.  Try not to let your diet get the better of you (as a matter of fact, don't diet, just eat better and move more).  Live for the day because that's all we have.
37. Quote a song lyric that sums up your year. I was about to list a playlist soundtrack I made for Nate's 1st year video and cd, but then I found a funny song I just loved this year, one that became a viral video sensation by Antoine Dodson.  "He's climbing in your windows so Hide your kids, hide your wife, hide your kids, hide your wife, hide your kids, hide your wife and hide your husband too..."
Email Post
Labels: "Year In Review"