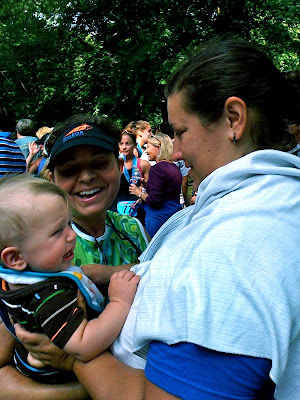 It's the small things in life that truly make me happy:

Crossing the SheRox Tri finish line with Nate, over-coming my fear of swimming in the Schuylkill River, finishing the triathlon for this season, being a good mentor.  I just found the photos from Action Sports International of this year's SheRox Tri, click here to see small thumbnail versions of the photos Action Sports International.  There are a few that brought some tears to my eyes and gave me a happy lump in my throat.  As a three-time triathlete, I have to say, it feels good to have accomplished and finished this year's triathlon in particular.  It's been a more difficult year for me mentally and physically, as I've written over and over again.  I did not train for this year's tri, to the degree that I trained for the 2008 and 2009 Tri's.  I just wasn't "with it" this year, my mental focus was clearly elsewhere, like with my new family and the lack of sleep.  I was really tired on Sunday, bone tired, so I just didn't have the push to do more than I did.  In my statements about being a mentor for this year, I chose to do so because I needed to motivate myself via motivating others.  Accomplishment number one!  The funny thing is, what I also accomplished I didn't even realize until well-after I crossed the finish line, literally and figuratively.

My time in this year's triathlon was somewhere between dreadful and not bad - depending on my mood and with what and whom you compare the numbers.  2:12, without the benefit of being in top shape, having barely run in the past month and with very little swim training.  I did better than my first year and not as well as my second year.  Over-all I'm pleased, mostly because there were other milestones achieved that are harder to quantify in time and numbers.

Accomplishment #1: Being a Mentor.  I had a great time being a mentor.  I took on this endeavor and really offered my experiences, life-story, inspirational ideas and training tips to over 20 women.  I met about 15 of them, wrote emails weekly and did training events at least every other week, some weeks doing two events!  I learned a lot about myself and found some patience and inner strength.  The feed back I've received has been overwhelmingly kind and positive.  I met some truly wonderful, determined and courageous women, many of whom I proud to have helped in some small way.  I was able to come to triathlon day and complete the event because of them.  Many of the women, nearly all who participated in the event as a matter of fact, had great race times - between an hour and a half to just a few minutes over 2 hours.  Strength of character comes in wanting to help and encourage others and not worrying about someone else being better than you; it's all relative. 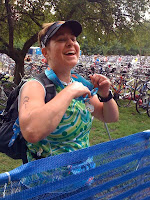 Accomplishment #2: I over-came my fear of swimming in the Schuylkill River.  That open water swim clinic a few weeks ago gave me the gumption to feel comfortable in the open water and swimming a distance greater than my gym's 50 foot pool.  I lived with the fear of this swim for two years - in 2008 I panicked so much that what little swim technique I had I forgot, doggie paddling my way through the event.  In 2009 I never got to test what I had learned in the intervening year. While I was relieved the swim was canceled due to the inclement weather, I didn't know if I had any ability to actually do the swim.  My fear was so great that I'm sure I would have been a nervous wreck.  This year I saw what my ability and strengths were and realized that had I been swimming all season, I would have been great in the water.   Funny how that works.  Work out, train, see results!
Though I did not have much in me physically on race day, I did have the thrill of knowing that I set out to do something and I completed my event.

Minor Accomplishment #4: Crossing that finish line with Nate, being a mom and a triathlete.  I can honestly say I never thought this would happen.  I've seen other women run with or hold their kids as they crossed the finish line, but for me, I never expected to be a parent, so it's not something I ever envisioned for myself.  The feeling was so thrilling and emotional, more so than when I crossed that finish line my very first time.  Having your own child will do that to you, giving you a new perspective and sense of accomplishment.  Nate, Liz and I, we all Rock!
Email Post
Labels: "Danskin SheRox Tri" "Failure/Success" determination Family Summer triathlon