Road Work for the Triathlon 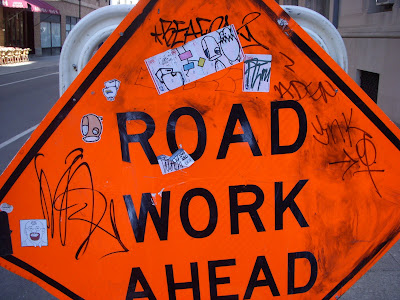 Over the past two weeks I've been doing a lot of work to get ready for the upcoming SheRox Triathlon on Sunday, August 1st.  In between work, my regular morning bike rides, a brief vacation in Cape May, New Jersey, there have been a few clinics and triathlon related events and workouts that I've either attended or organized.  This has been an unusual season for me, as I haven't been exercising nearly as much as I did last year, or even the year before last.  While I've run outside a lot more this year than in the past two years, I haven't been swimming much at all.  I somehow managed to ride over 1,110 miles on my road bike since my season started (I'm guessing I put most of these miles on the bike sometime between Mid-March and now).  I've become a bit obsessed with feedback, logging all of my bicycle miles; the training, commuting and errands I've completed on my two bikes since May 26th.  My total biking mileage is over 700 miles in less than 2 months!  While I complain and beat myself up about my poor workout habits, I am still doing stuff to get ready for this triathlon (in addition to trying to be a good mom/spouse/employee.) 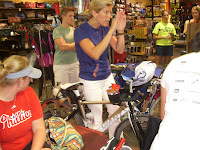 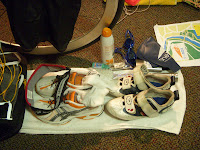 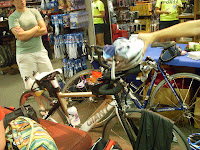 Most of my real triathlon road work has come in the form of mentoring.  I had no idea how much time and effort I would put into the mentoring, nor did I have a clue as to how the mentoring would effect me.  It's been a heady, trippy, challenging experience.  There are times when I felt like I was sending out emails into the great unknown Internet world and then I'd get lovely email responses back from my mentees; I'd read stories about my mentees' training, accomplishments, other triathlons and adventures.  I'd organize bi-weekly events and occasionally meet one or five mentees.  But the best experience so far happened between the SheRox Tri transition clinic last week and on a BRICK workout last night, Wednesday, July 21st.  At the transition clinic, I got the feeling of this event was real and happening.  I felt the excitement and anxiety that I felt at the the last two triathlons.  It's a good feeling and made me realize that I was truly looking forward to the tri.  After the clinic, I organized a bike ride with some hill workouts for my mentees, and had 5 or 6 women show up for the ride, some of whom I had not previously met.  For our BRICK workout, which is a bike then run event, I had 12 women attend, most of whom I had never previously met!  We biked 11 miles, took several hills and ran at 7 pm in 91 degree weather for about 2 1/2 miles.  We were wiped out but everyone in attendance felt challenged by the workout giving all of us a real understanding of how we'll probably feel on race day.
The event that makes me look forward to race day, the one that made me really feel like I would be doing the triathlon and do it well was on this past Sunday. There was an open water swim in the Schuylkill River, at the Philadelphia Swim Club in Miquon.  This is a location that I've passed by on many occasions but never knew it existed.  It's along the river, below the Schuylkill River trail path in a small riverside community.  As a mentor, I was one of several "swim angels" assistant life guards of a sort, swimming out in the river with two "noodle" floatation devices, keeping an eye on the swimming triathlon participants and offering them a noodle if they needed a rest or assistance during their swim practice.  I spent well over an hour in the river, conquering my own nervousness about swimming in the Schuylkill.  I know I did it once before, but that was two years ago and it wasn't my best experience or effort.  My swim angel duties were mostly spent with one of my mentees who needed our encouragement and assistance.  I admire her determination but worry about her ability to finish the swim portion of the triathlon.   Since this was a well run clinic and there were many lifeguards and safety practices in place, the triathlon organizers stepped in to help with her swim.  Not sure if she'll complete the swim portion but I do know that I offered all the help I could, as well as all of my skills, knowledge and positive advice for and to her as well as to several other first time triathlon participants.  After my angel duties, the mentors had the chance to do their own swim in the Schuylkill.  I debated about getting back in the water and doing the swim but then I realized that this was my best chance to see what I could do and swim in the open water.  I am so glad I took the opportunity.  I did a slow and steady 2/10ths of a mile swim, I suppose equivalent to about half of the actual distance I'll be doing on race day.  It wasn't my best effort but I felt confident and strong, remembering all the things I learned from my swimming lessons last year. Mostly I felt like a real triathlete for the first time.  I understand the anxiety that most newbies to the sport feel.  I can fully appreciate the difficulty the swim portion holds for a triathlon and the challenges you need to over-come in order to finish the swim and tackle the bike and run.  Mentoring has revealed new abilities that I possess and skills that I didn't quite believe I could master.  Once again I have to say there is real power in positive thinking and sharing your beliefs, talent and knowledge.  Bring it on race day - I'm coming to this triathlon and I'm gonna rock/rox it!
Email Post
Labels: determination exercise SheRoxTri Summer swimming triathlon