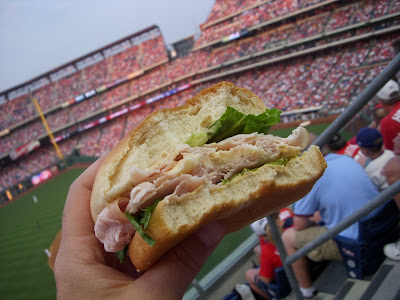 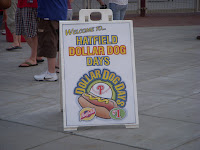 Sometimes bringing your own sandwich to a baseball game beats paying five bucks for a limpid rubbery over-cooked hot dog,  even on Dollar Dog Day.
I usually pack my own food for an outing to a Phillies game, keeping the meals healthy or at least healthier and having a better variety of food stuffs.  Cheesesteaks, hoagies and the infamous (and exactly what the heck is it?) Schmitter Sandwich just doesn't cut the mustard for me; it only cuts into my wallet and waistline, excessively in both cases.  At last night's game I made a nice sandwich of lean smoked turkey lunch meat, my favorite cheese - Cooper Sharp, Romain lettuce,  spicy and Dijon mustards and put it all on a delicious Country White bun from Nature's Pride.  Low sodium, high protein, no trans fats or high fructose corn syrup.  I came home a few weeks ago to find some buns in my box, my mail box that is! FoodBuzz, my blog aggregator and advertiser came through with a cache of bread for me - Nature's Pride buns and rolls; Country White, Whole Wheat and a package of buns perfect for Lobster Rolls (mmm, stay tuned for a delicious Summer recipe!)  So far I haven't been disappointed with the goodies.  They arrived really fresh and the stats on them were impressive, though not low-calorie.  Unless I'm eating cardboard or Deli-thins, these days, it's hard to find hamburger rolls and hot dog buns that taste good and aren't full of crap.  I froze the rolls, since I knew we wouldn't eat them quick enough before they spoiled.  Out of the freezer they just as fresh as when I received them.   So in the words of food writers I like, Two tips of the toque, a bouquet of a knife, fork and spoon, five tines and a happy Bon Apetite to Nature's Pride for their summer-time offerings towards my ballpark fare!
My beloved Fightin's are truly disappointing me and a lot of other Phans; the team's been on a losing streak of not quite epic proportions.  Like Bill Conlin said today in his Daily News Column, Phans are "Jumping off a Cliff (Lee).  Well, the losing isn't so terrible, we are only 5 games back behind the Atlanta Braves - aka Hot'Lanta Braves these days.  It'd just be nice to see some hitting and small ball being played along with consistent and good offense.  Naturally, better pitching from our pathetic bullpen wouldn't hurt the late innings either.  According to Sports-night on Comcast, the Phils are in the same place that they were in last year.  It seems odd coming off two phenomenal seasons; the 2008 World Series Win and the 2009 National League Pennant Champs.  Of course, our April and May of this season were great, winning more games than the team normally wins.  Our June, we had a bad streak of losses confounding even the most jaded sportscasters.  Getting Roy Halladay as our starting pitcher was a great idea, losing Cliff Lee in the deal, not so great.  And while Roy's perfect game and seven complete games pitched this season are awe-inspiring, having a team not producing results around and behind Mr. Halladay's tremendous talent and efforts is not Phillies' worthy.  We phans want to bitch and moan about the Yankees and other baseball teams that stockpile their teams with the best superstar players, but hey, you gotta pay to play sometimes.  About now, I'd like to see some Yankees' style business on the field.  Too bad the most interesting thing about the past month's home games was this guy - the dude selling whacky souvenirs.    Play Ball, better! PLEASE! 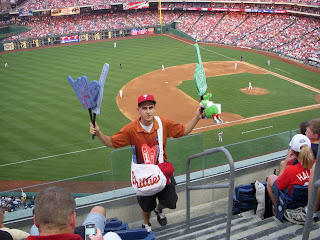