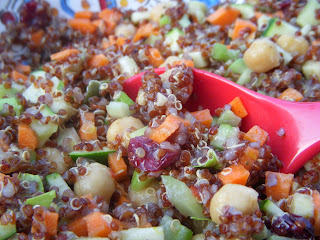 Quinoa is the oldest ancient grain, a perfect protein and a misunderstood whole grain. Pronounced Keen-Wah, quinoa comes in either red or golden/brown and it is a wonderful substitute for brown rice, Bulgar wheat or even couscous in salads, side dishes or even as a breakfast porridge. Truly! I've seen quinoa on the menu at Green Eggs Cafe and have it on good authority that it's scrumptious as a hot cereal - along the lines of my version of breakfast couscous.
Trader Joe's was promoting boxes of Red Quinoa about a month ago and like with most successful marketing or store campaigns, the end cap displays were intriguing enough to entice me to buy a box. The box sat in my cupboard for awhile and then I was inspired to make this salad, based on two other salads I've had, a bulgar wheat salad and a chickpea and cranberry salad.  I took the best of each and combined them into this Quinoa, Chickpea and Dried Cranberry Medley.  Note, I cooked the quinoa in flavorful water, not knowing for sure what I would do with it once it was cooked. I tossed in a vegetable bullion cube and dried bell pepper flakes.  Half a packaged of dried salad dressing mix would do the trick too (though it might be a tad salty).  The quinoa was tasty just as I cooked it but since it was already flavorful,  it was magical in this salad.
Red Quinoa, Chickpeas and Dried Cranberry Salad Ingredients:
Lemon Vinaigrette Ingredients: (or use 1 cup of a light bottled vinaigrette of choice, such as light balsamic, Italian, or lemon)
Directions: 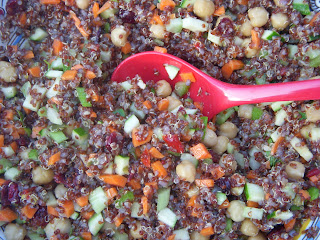