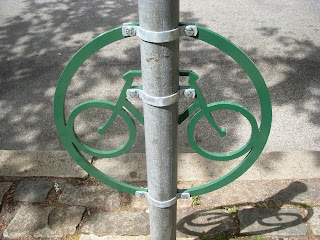 One of my big pet peeves about bicycling, cyclists and riding in the City is - we have few places to lock our bikes. Never mind my other pet peeves such as the rude cyclists riding on the sidewalk; the completely kitted-out riders who think they are Lance Armstrong in the final run of the Tour du France and don't know anything about real cycling; the flip flops on their feet and no helmet on their head fixie riders; the glass and debris strewn pot-hole and wonky streets that tear up my skinny road bike tires; Stu Bykofsky of the Daily News with his constant whining and misinformed writings of impending doom about how we don't need any more bike lanes in Philly; and the drivers who want to cut you off the road and send you flying into traffic to a certain death or injury. Nope - my big pet peeve is that since the parking meters were taken off the streets and parking kiosks were installed, there is less bicycle parking space in Center City Philadelphia. Until last week. Thank you Streets Department for coming through on your promise to install these swank cut-outs onto the old meter poles, repurposing them for the thousands of bike riders. Thank you Bicycle Coalition of Greater Philadelphia for advocating and keeping this need in the public's attention and on the agenda of the Streets Department. Thank you Mayor Nutter for not cutting the funds used for this important installation. And thank you, you mis-guided fool, anti-cyclist, Neanderthal, gas-guzzling, BP supporter, Stu Bykofsky for providing column space about the Philly Biking scene. Bad press is still press and your rants have garnered a lot of attention and funds for the Bicycle Coalition.
Email Post
Labels: biking