I swim, bike and run because I have to 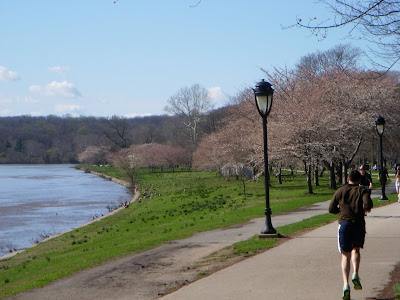 SheRoxTri / She Rox Tri / SheRox Tri updates:  it has been another good week for the triathlon training and mentoring.  I had the chance to swim once, bike three times and run twice, once on a treadmill and  again along the Wissahickon Trail towards Valley Green (allowing me another driving opportunity along Kelly and Lincoln Drives.)  In our morning rides, there's a new addition to the Sue Crew Cyclists, a friend of Sue S's named Ellen, who has been nick-named Sue-Ellen.  She's a fast rider - long legged and an excellent cyclist and athlete.  The morning rides are  more challenging having a faster rider to set the pace.  I'm not sure if I'm slower because it's early in the season and it's been cold and windy, but I find that I need to step up my cycling and figure out how to become more efficient.  It's similar with my swimming and running, I need to work on them both to become better at all of my triathlon sports.  That's the good thing about being a SheRox Mentor this year, I'll have to work on myself in order to be able to help the women whom I'm mentoring.  Something I've thought and talked about often, once I start something, I'm usually fine, seeing the task through to the end.  I don't have any trouble finishing a project, my problem is starting.  When I got back in the pool last week, I realized I remembered most of the tips I learned from my swimming lessons.  Same thing with the running - once I get out onto the street/trail/path, I'm fine, I even enjoy running.  It's just starting that is a problem for me.  The motivation to get up at 5 am on a Saturday and drive 30 or 40 minutes up to Chestnut Hill along Kelly Drive because someone is relying on me to be there is a powerful force.  Yesterday, I was the "lead mentor" for the group run.  I'm really glad I went, as there were two new women who were there for the run.  Had I not shown up, there wouldn't have been a mentor or representative there for them.  I had a morning mitzvah that served several of us well - I got some driving practice, an early morning run and was home by 9 am, in time to have the whole day with Liz and Nibblet.  The women I met got some tips, a run and hopefully some inspiration to take them through with their tri-training.  A friend told me that you learn a lot about yourself when you are training for an athletic event; for my third tri, I'm sure there's a lot I'll learn from this new experience of being an insider/mentor.
Email Post
Labels: determination exercise SheRoxTri triathlon