Beer by Bike to Yards Brewery 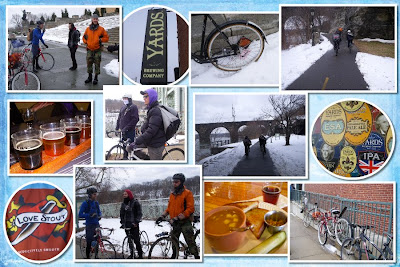 My second brewery tour via bicycle with  Beer by Bike took place this past Saturday, February 27th. We went to Yards Brewery in Fishtown.  I finally got to meet the Leader of Beer by Bike, the absolutely delightfully polite, Jesse.  The meet-up was at the Art Museum Steps around 11 am.  The weather was over-cast and brisk and while Philadelphia dodged another Nor'Easter there were snow showers as I headed out in the morning. I wasn't sure how many riders would show up nor was I sure if I would know any of the other beer riders.  No worries, plenty of boys came out for the ride and I did "know" one or two of the fellas.  Funny thing was, I was the only woman and, was again, by far the oldest (chronologically speaking) person there.   All the guys were very nice and friendly and I felt welcome and not at all out of place - on my crazy bike or in that vague, girl invading the boys clubhouse kind of way.  The day reminded me of playing with the neighborhood boys, I was treated with respect but also as just another one of the gang. We biked up Kelly Drive to East Falls Bridge then back down Kelly Drive to the Parkway.  From there we headed down Spring Garden Street, a motley crew on a variety of bicycle "steeds."  I rode the beach cruiser again as it's steadier on the ice and snow patches. As I said in my Snow Ride post, I get a better work out when riding it.  From Spring Garden Street we hit Columbus Blvd, aka, Delaware Avenue and hung a quick left to Yards Brewery, about two blocks up the road.  A few more Beer by Bike participants met us at Yards than actually rode with us to the brewery, bringing our total number of bikers at the brewery nearer to 20 people.
This Yards Brewery location is about a two years old - the settlings of a nasty "divorce" case between business partners who first founded Yards Brewery in Mannyunk.  The split created a brewery in Kennsington called Philadelphia Brewing Company and now this new Yards in the Fishtown/Northern Liberties area.  My money's on Yards - I enjoy their beers more; I'm especially fond of a brew called the Brawler Ale, a Puligist style ale.  Plus, they have a cool bicycle jersey with the Brawler Ale logo on it. Nods to the biking community.
Yards Brewery is a fully working brewery - brewing several beers on location for "in-house" tasting and sales of bottles for "at-home" enjoyment. Yards is also open for brewery tours.  The main room, recently opened for service;  it was reorganized to include a working bar, kitchen, tables, booths and pool table.  It's kind of a bare bones affair.  The building is certified green, using recycle and reclaimed materials and wind turbine energy.  The over-all look of the place is of an industrial warehouse -  cement floors, exposed air shafts and metal support beams.  A trip to Yards is and should be about the great beer experience and definitely not about the ambiance and decor.  The beers, some of which are seasonal, are full-flavored, exceptionally fresh and full of hoppy high alcohol contents.  The lowest alcohol content I noticed was around 4% and the highest was nearing 8 or 9%. Commercial brews like Bud, Coors, Miller and that ilk have around a standard 4% or 5% max.  The brewery tour is a must, for you learn how these fine libations come to be and you get to sample one or two of the day's brews for free.  The foods are fine, not anything to take you out of your dining way, but fine. They serve a variety of grilled cheese and other sandwiches, soups and chili.  The bread is baked in-house and there are several varieties, all made with a house beer.  There is a Thomas Jefferson Ale Bread, George Washington Porter Bread, and a Pumpernickel made with the GW Porter too. The breads are toothsome and hearty, much like the beers with which they were baked.  With my lunch, I sampled flights of  the Revolutionary Beers - The Thomas Jefferson Ale, George Washington Tavern Porter, the Old Bartholomew Barley Wine, and the Poor Richard's' Spruce Ale.  The beers were tasty  - not a bad sip in the bunch. While I am firmly a darker beer or porter/stout drinking gal, the Barley Wine style beer was a surprise hit.  It was clean tasting, not too sweet or malt liquor tasting, buy rather refreshing and piquant.   For lunch, I had a grilled mozzarella and sundried tomato sandwich with a side of grainy mustard and a garlic pickle, served on the GW Porter Bread along with a cup of Barley and Bacon Soup.  Just the thing for a cold winter's day.  I had to cut out early, so I didn't get the chance to enjoy a second flight or sample the other beers.

I look forward to another visit to Yards.  It would be a good place to go on another late winter's or early spring day with a group of friends. It's also a great place for a party or fundraiser event.  I'm also looking forward to more cycling and beer rides with this eclectic and smart group of riders.  Any group of people -  men, women, youngish or young at heart and spirit is a group I want to be and ride with more often.
Email Post
Labels: "Philadelphia Sights" beer biking