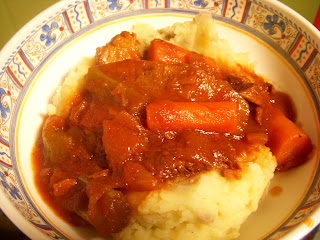 Liz and I have a collaborative cooking relationship going on when it comes to our one-pot meals. I either call her mid-day and tell her what to toss into the 30 year old Le Creuset Dutch Oven pot we have, or I send her a brief email detailing the stuff to toss into the pot. Either way, our cooking for Dummies method really works. No, I'm not calling Liz a Dummy, she's quite brilliant. I'm just an uppity kitchen biatch but I do deign to allow my lovely to venture into my private domain and whip us up a tasty treat or two. I don't attempt to conduct or play the piano - which Liz does for her line of work, so she doesn't get to cook much for us, as that was once my line of work and my preferred creative outlet. Our beef brisket, done in a slightly Texas-style mix-up was to date, one our best efforts. Suffice it to say, there were not many left-overs. Herewith is the recipe, re-written in a more direct and ready to share method.
Slow Cooked Beef Brisket with Coke, Dark Beer & Tomato Sauce Ingredients:
Directions:
Email Post
Labels: "Comfort Foods" "Slow Cooker" beef beer cooking recipes tomatosauce winter